ITMO University has become one of the first Russian universities to join edX, the nonprofit online learning destination founded by Harvard and Massachusetts Institute of Technology (MIT). Students from all around the world can now enroll into the first online course from the alma mater of sport programming champions to learn the secrets of winning international coding competitions from ITMO University experts. 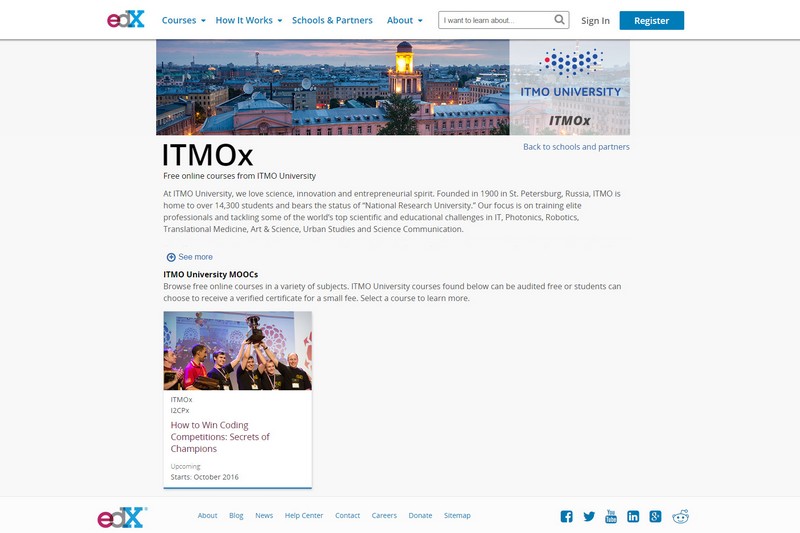 The partnership of one of Russia's leading universities with edX has become an important step in the development of open education as a new element of higher education in Russia and integrating the country's educational system into the global one.

"How many times have we heard about the massification of education at international conferences! Today, students choose themselves what they will be learning and where. Education is governed by the rules of free competition. The quality of educational services is evaluated by the client, the student. The debut course offered by ITMO University on edX is the one from our world programming champions. Our coaches now actively train teams all over the globe. Thanks to launching a course on edX ITMO University champions have become closer”, says Daria Kozlova, Vice Rector for International Relations at ITMO University.

“We are honored to welcome ITMO University to the edX platform as one of our first Russian partners,” said Anant Agarwal, edX CEO and MIT Professor. “With its expertise in information and technology and experience in online education, and being the only six-time world champions of the top coding competition, ITMO University will not only deliver high-quality content to the edX global learning community, but will also instill a love of computer science and innovation in learners around the world.” The first course by ITMO University, or ITMOx (as represented on edX), named "How to Win Coding Competitions: Secrets of Champions" is already available for registration. Over 300 learners from various countries have already enrolled to the course for the first days since its announcement.

“Participating in sport programming competitions is a great way of self-development for a programmer”, thinks Maxim Buzdalov, Associate Professor at the Chair of Computer Technologies at ITMO University, one of the authors and instructors of the course and the champion of ACM ICPC 2009. “When competing, especially at high-level coding cups, one polishes his or her own skills of understanding and creative interpretation of problems to be solved, building mathematical models, proving the correctness and effectiveness of their solutions, finding mistakes in their code, etc. – and all that within a limited time given to participants. Specialists who have passed through the mill of such competitions are highly valued by leading software developers as they are able to solve problems on the fly that would take a less experienced programmer a lot of time to crack.” “This course is designed for everyone who has started participating in coding competitions recently or is just going to begin. Its purpose is to build a bridge for those already having basic programming skills to competitive programming where you are required to figure out solutions yourself and effectiveness is the basic quality criterion”, explains the coach.

The “champions’” course from ITMO University starts in October, 2016 and will run for five weeks; the final test for the students will be held in the format of a real international programming competition.

ITMO University is planning to launch several more courses on edX by the end of 2016. The second one will be an optical system design course developed by Irina Livshits, the leading researcher in this area, Head of CAD Opto-Information and Energy Saving Systems Laboratory at ITMO University, together with her American co-author Donald Dilworth, President of Optical Systems Design, Inc. and the creator of the well-known SYNOPSYS™ lens design program.

ITMO University has been developing open education projects for several years already. Previously, it launched about a dozen online courses on the leading Russian MOOC platform called "Open Education", as well as on its own platform ITMOcourses powered by Open edX.