Making science boring is easy, but making it fun and accessible to anyone takes true talent. Future scientific heavyweights sparred in the best humorous yet informative presentations of their work at the Science Slam Finals that took place on April 15 at ITMO University, wrapping up V National Congress of Young Scientists. 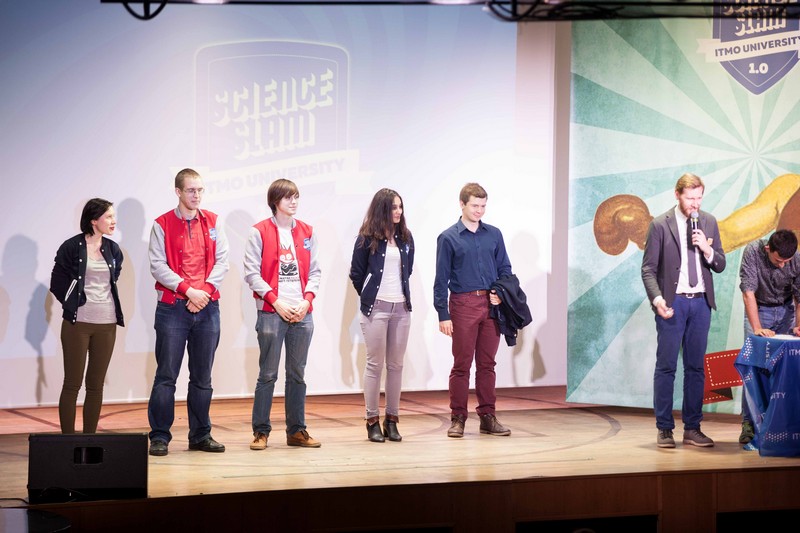 Science Slam is a communication format where scientific information is delivered in an easy-to-follow, short talks in front of a non-expert audience. Projects are selected through an open competition, and researchers get a month-long training in public speaking. ITMO U hosted its slam for the first time.

Vladimir Borisov, a graduate student of the Photonics and Optoinformatics Chair, presented a concept of invisibility that would make even Harry Potter jealous. According to Borisov, something is invisible when you can see what’s behind it. The magic is bending the waves, which he delivered with a help of optics and metamaterials. When placed around an object in a certain way, hexagons with different refractive indices allow to "trick" light and make it go around the object, which eventually becomes invisible.

However, while this method works well only in the case of microwaves. Another way - judicious use of light-sensitive environments. Borisov has found another clever way: draw a desired grating with a laser,  let light pass through the material and analyze the information received.

Sawsan Abdulrazak a student at the Laser Optics Chair, uses in her research the idea of ​​"light trapping", familiar to us from a science fiction movies where aliens abduct humans with a beam of light. The weapon of choice for the young scientist are optical tweezers, which can not only firmly grasp erythrocyte for its detailed study, but in the future will allow to transfer a portion of one DNA to another.

The Tree of Code

The structure of code is just like a tree, according to Marksim Skorohodov, a student of the Informatics and Applied Math Chair, who presented his work on optimizing code control systems.

"In the case of trees, the difference is not measured in what lines to add and what to delete but what tops you need to delete or change,” Skorohodov said. “Each top has an influence on the other tops and can affect not just one but a whole set of lines. Finally I will say that not only in IT, but also in everyday life monotonous, long and hard work is not uncommon, which is very time-consuming. But to solve it, sometimes all you need is to see the structure.”

Svyatoslav Gusev, who knows firsthand about diabetes, presented to the public his non-invasive laser meter. The devices uses spectroscopy to help diabetics eliminate the need for daily finger pricking to determine the level of glucose in the blood, and will save people money spent on test strips and other invasive glucometers.

"Where do you think is best place to measure the blood sugar level noninvasively? It is necessary that the capillary net is located as close as possible to the surface of the body, and at the same time, the volume of water between it and the device must be minimal,” he noted. “These requirements satisfy are satisfied by a nail, which serves as a support layer for us and has a smooth border environments on which we can judge the concentration of glucose.”

Ekaterina Volodina, a specialist at the international laboratory “Solution Chemistry of Advanced Materials and Technologies.” spoke about the promising development, which in the future could help in the fight against Alzheimer's disease or Parkinson's. Under certain conditions it’s possible to restore the properties of toxic denatured proteins, making them more effective. In theory, this will simplify and reduce the cost of medicines derived from human proteins as denatured protein molecules (carboxylic anhydrase) are mixed with the colloidal solution of inorganic nanoparticles of aluminum.

The Slam was wrapped by Ivan Iosh with the Chair of Nanophotonics and Metamaterials who is one of the winners of the city-wide Science Slam. His presentation was on the future of photon-based computers.

Next ITMO University Science Slam will take place in the fall of 2016.