To fearlessly face the challenges of the XXI century, to contribute to the technological progress and science development, to think innovative and pass end-of-semester exams, but still find time to watch the "Star Wars" for a second time - these were some of ITMO's new student's oaths for the future. During the Knowledge Day celebration, the former schoolers learned "ITMO's formula": they've found out the core values of their future Alma Mater, met with deans of their departments, and, finally, got their student cards. 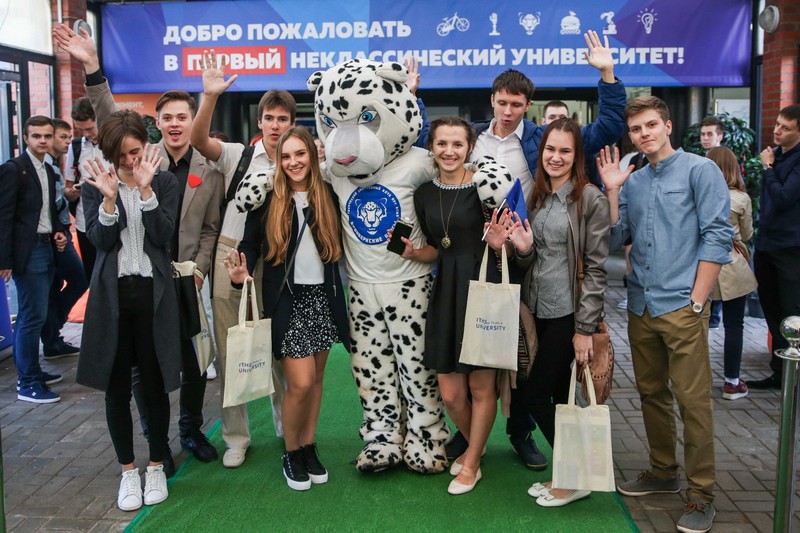 During the concert in the Musiс Hall, ITMO University's Rector Vladimir Vasilyev congratulated the freshman and underlined that they've enrolled in Russia's first non-classical university. He explained what ITMO's main features are about: global, research-oriented, entrepreneurial, social- and person-focused. Global, as students from 70 countries from all over the world study at ITMO University, and about 160 of its lecturers are representatives of leading foreign universities. What's more, students can study disciplines in English or get a double degree program with one of the partner universities. As an entrepreneurial university ITMO offers its students an opportunity to start their own businesses with the help of its Technopark, startup accelerators and other special units.

"Research-oriented university means not only participating in scientific research, but also generating new knowledge, that you'll be getting alongside your professors and other students. It means that since this day, we're all colleagues. Each of you will choose his own way, as we are a person-focused university. And our slogan “IT's MOre than a university” means that we have social responsibilities, as our university unites not only students and lecturers, but also our graduates, partners, Saint Petersburg's residents", - concluded the Rector.

He added that getting higher education in Saint Petersburg is also a great opportunity to learn Russia's history and culture and to become a part of the international events hosted in the city every year. ITMO's undergraduates have prepared a concert for the first year students: they've shown the newcomers opportunities presented by the university in a stage show. The first years learned about the "Kron Bars" student sports club, different vocal-instrumental clubs, the scientific stand-up competition Science Slam and many other things.

"The University will give you lots of opportunities: to take part in contests, win grants and many others. But it is you who have to decide what you want to attain. Take part in student initiatives and activities, live  and be a personality", - with these words, Polina Litvinenko, head of ITMO's Student Council greeted the new students.

Kirill Grigoryan, the bronze medalist of the 2016 Olympics in Rio de Janeiro, also greeted the students - he graduated from ITMO University in 2014 with honours. He underlined that the wish to make it is the most important - then, all your hardships will bring you pleasure and all your wishes will come true. Apart from getting the student cards, the first years also answered survey where they were to write their dreams and goals for 2022. After the ceremony, the rector sealed them in a "memory card" that is to be opened in six years, when the current first years will become Master's Program graduates. This symbolic ritual will become another of ITMO's traditions; amongst others is rector's selfies with first years that he usually does from the Music Hall's stage.