“Building a Better World: The Academy as Leader” was a motto of the international conference initiated by Association of International Education Administration. The meeting joined worldwide experts in senior international education on February 21-24 in Montreal, Quebec, Canada. Daria Kozlova, Vice Rector for International Relations represented Russia at the AIEA Conference. 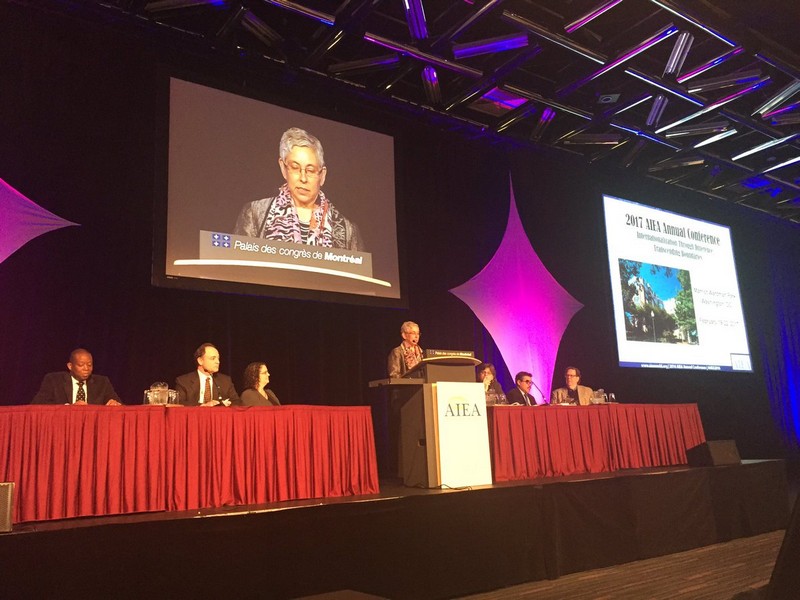 Ms. Kozlova in her speech put emphasis on the development of double degree programs, their budgeting and peculiarities of Russian academic mobility programs. Apart from that the expert also commented on ITMO University`s experience in providing non-degree programs for international students.

“Our approach to academic mobility differs from American. We assist students to broaden their experience and get new skills while studying abroad. Our programs resemble European ones. It was European universities who developed Erasmus Mundus program,” said Daria Kozlova.

According to the Vice Rector for International Relations, these differences make ITMO University`s joint exchange programs supported by American universities less effective than others.

“I offered American colleagues to use a new angle on these activities. In accordance with Russian approach students should actively participate in various programs. I hope that this discussion induced our partners to think about some changes,” said Ms. Kozlova.

AIEA`s participants also focused on the challenges faced by institutions connected with internationalization of higher education. According to the experts, the main things hindering development of exchange programs are the lack of financing, cross-cultural distinctions and geographical peculiarities.

“Developing international educational practices ITMO University meets the following obstacle: the deficiency of interuniversity exchange projects. The last year was completely devoted to making exchange programs popular with students. Thus we launched ITMO Student Ambassador Competition and continued to develop English-language environment at ITMO University. Currently all excellent students who speak good English might spend one or two semesters in a partnering university. We plan to involve about 500 students in such programs per year. Moreover, we are going to double this number in the nearest future,” noted Ms. Kozlova.

AIEA Conference is a wonderful opportunity for Russia to present its` best educational practices and exchange experience with colleagues from all over the world as well as to share some results of educational reforms that change Russian universities turning them into key players on the global higher ed arena.

“It was significant that participants discussed only those issues that were connected with higher education and didn`t comment on international climate`s problems. It proves that our collaboration is not affected by politics,” underlined Daria Kozlova.