The Ultimate Guide to the Russian Banya (Part 2)

In Part 1 of this appraisal of the phenomenon that is The Russian Banya, we examined a little of the history, cultural impact and bizarre etiquette of Russian bathing. Here, in Part 2, we take a grand steam-room tour through everything that St. Petersburg has to offer. 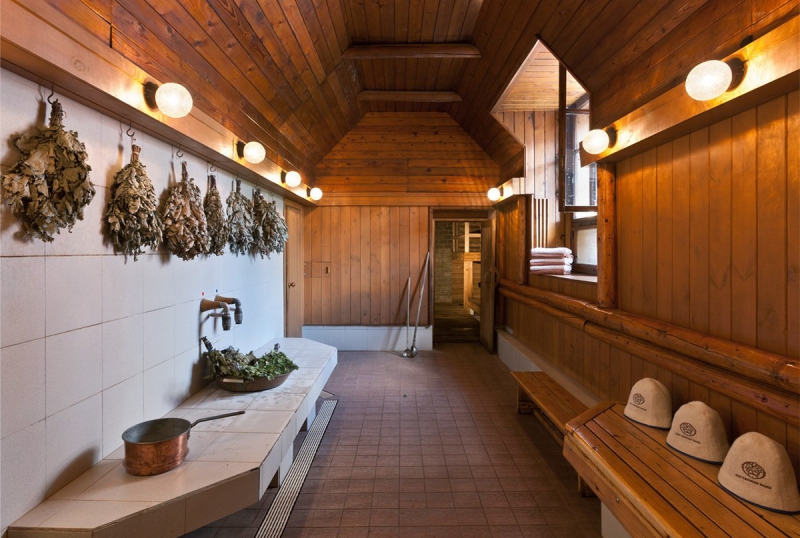 It begins with one of the oldest and most infamous, the Yamskie Bani, once patronized by some of St. Petersburg’s most prominent political and cultural figures: "The walls of our Banya,' boasts the website, "remember Lenin, Dostoyevsky, Mussorgsky…'

But these days there is very little hint of glitterati — or even gaiety of any kind — in what seems like a very sober and staunchly low-key operation. The theme is, very loosely, the rustic Banya recreated. Planks of wood are bolted haphazardly to the wall and the changing rooms have wooden frills slightly reminiscent of a mountain-top fortress. But it’s all rather spoiled by the plastic panelling and ugly exposed pipes, presumably added in the Soviet era. The entrance is marked by an intriguing, industrial metal canopy, but otherwise could be the unloved stairway to any shop or office. Service is gruff, bordering on obstructive. A dour receptionist reluctantly accepts 600 roubles for the two hour session, and, for an extra 120, hands over a well-worn, exhaustively-laundered "prostinya' or "sheet.' The only vague hint of hospitality comes downstairs in the "Banya Shop' where a moderately jovial lady sells a decent variety of Veniki, at prices ranging from 120 to 300 rubles (if you need reminding, she is quite knowledgeable on their various properties.) The shop also stocks an impressive range of Banya hats; I picked up one emblazoned with a red Soviet star, a snip at just 350 rubles.

The real disappointment of Yamskie comes as you venture further. The Predbannik area, with its undistinctive brown and beige tiling, could be any swimming pool locker-room. And the Parilka itself is cramped and pitifully over-crowded, with barely room for six or seven bathers, far less if someone is lying prone, in mid-flog. Worst of all is the garish, bleached bright lighting, which makes you feel a lot more naked than you actually are and quickly sucks away any shreds of atmosphere or conviviality.

The main positive of Yanskii is that punters seem to like it. It’s well subscribed and, in the common areas, where guys drink beer, talk auto-repairs and Dacha renovations, there is something akin to a party feel. The young man sharing my changing cubicle claimed that it as the best in the city because of its "clean water and clean air.' But overall, Yamskie gives the impression of being tatty, run-down and past its prime. Too much has been lost since the days of Dostoyevsky and Lenin to give it a full-fledged recommendation. The next Banya on the list couldn’t have been more radically different. Degtyarnie Bani, located on the street of the same name just north of Stary Nevsky, bills itself as a luxury establishment for an elite clientele. Even the entrance is slick and corporate, all marble tiles and paneling, with shiny chrome fittings. The changing rooms look straight out of Trump Tower — smothered in grey marble and polished metal, offset by dashes of wood. The Predbannik boasts a dizzying array of plunge pools, swimming pools, wet-rooms, jacuzzis.

And that’s just regular Klass. In Premium, well-off punters can also expect billiard tables, adjacent full-service restaurant, an 8 metre pool and opulent decor, including fountains and marble urns in every alcove — every budding oligarch’s wet dream. Of course, such Banya splendour comes at a price: up to 1500 for a day or weekend session in Regular, a whopping 18 000 per hour in Premium, for up to 15 guests. It’s Banya opulence on an unprecedented scale, if somewhat lacking in authenticity and character.

To remedy this last deficiency, Degtyarnie has come up with Russky Klass. This meticlously transplants and recreates the village Banya, complete with chunky wooden steeping basins, wood-levered taps, wooden plunge pools and dunking cisterns, acres of gratuitous panelling (wood of course), wood-lined dining room, even an old upright piano. It’s infinitely more successful in creating countryside ambience than the Yamskie — but still seems just a little too cliched and fake.

So, in search of elusive authenticity, I continued on to the next candidate: Mytninskie Bani, reputedly the oldest in the city and the last to use traditional wood-burning stoves. For this leg, I was joined by friend and Banya Connoisseur, the artist Oleg Maslov, who is a Mytninskie regular and rates it among the city’s best.

The entrance, again from the street of the same name, turned out to be rather unprepossessing — two-tone pastel bleakness, resembling a hospital or mental asylum. In Pol-Lux — or half Luxury — it was still pretty rudimentary: a changing room divided by dark partitions into what look like church pews; a simple bar serving up beer and vobla, or dried sprats; a rudimentary tiled Predbannik, looking somewhat old and tired and with just two showers; even the Parilka is miniscule — with barely enough room for four or five people. If this was Pol Lux, I did wonder what the regular "People's' Klass must be like!

But there is something inescapably friendly and inviting about Mytninskie. It’s authentic and unpretentious and undeniably Russian!

And while in the other Banyas I’d visited, flogging had been a fairly muted affair, with most bathers quietly and sullenly beating themselves with a single venik, in Mytninskie, it’s a gloriously communal affair, with everyone chipping in with assistance and advice. And the Banya also boasts its own professional Flogger, a veritable Venik genius called Rasul. The breath of Rasul’s talent is, quite simply, astounding. He’s a short, stocky, unremarkable Caucasian guy, indistinguishable from the other bathers. But with the bunches in his hands — Rasul is a wonder to behold. He plays the body with his Veniki like a percussive musical instrument. The sheer variety of swishes, twitches, crashes, slaps and splashes in his repertoire is nothing less than symphonic. Even Alexei, instigator of my own first out of body Banya experience, could never have competed with this. And as Rasul built to a climax, I could have sworn that rhythm he summoned — birch-twig tuttis, alder allegros — were not unlike the shivery percussive waves that Stravinsky conjures up in his landmark composition, the Rite of Spring. Who knows? It’s not totally implausible that Stravinsky was inspired by the sounds and sensations of the Russian Banya.

In deference to Alexei, and because I’d invited a friend along (and perhaps also because the 600 roubles he charges would have pushed my ITMO budget to breaking point), I decided not to avail of Rasul’s services this time. Instead, Oleg bashed me inelegantly with a venik — it was good fun and relatively restorative and afterwards we drank beer and exchanged some juicy gossip!

There was one final Banya I wanted to try — primarily because it’s around the corner from my apartment, and though I pass it every day, had never ventured inside. Once allegedly a house of ill repute, the handsome lo-rise red-bricked building at 12 Makarenko Lane has been reconstructed and reimagined as a modern bathing complex that includes a high-tech futuristic massage and sauna centre called "Space' as well as the more traditional Ysachevskie Bani.

Ysachevskie is modern, but not overbearingly so. In "Narodny' or "People's Klass,' the changing room was open plan, with bathers to be sitting in what can only be described as tiled grey thrones. A small marble slab acts as a stand for tea or beer or whatever else you might like to order from the bar and adjacent restaurant. Most impressive is that the Predbannik is enormous — with rows and rows of showers and platforms for steeping Venik — plus an inviting wooden plunge pool. And the Parilka is — by the standards of the others I’d visited — simply gigantic: A huge wooden and brick chamber, with tastefully shadowy lighting, two slightly different levels for gradated heat experiences. It has just a hint of Scandinavia, while remaining entirely Russian at heart.

Raznochintsy or "All Ranks' Klass adds classier wooden decor, a restaurant and bar area, a sizeable swimming pool, a massive, village-style wooden plunge pool, massage facilities and a clutch of smaller more intimate steam rooms. Kupechesky or Merchant’s Klass ramps this up even further — though, with leather changing seats and chintz-panelled lockers, it veers slightly in the direction of Kitsch. But taken overall, Ysachevskie Bani is right up there among the best in the city.

It would be unfair to finish without talking about one other Banya, which I’ve been frequenting on and off for much of my time here in St. Petersburg. Lotsmanskie Bani, on the corner of Ploshchad Repina, is not as central as the others and not as well maintained. But it does host regular nights and informal Banya clubs — which are by invite only. My attendance at the mixed night there — frequented by a select band of both men and women — raised eyebrows among both Russian and foreign friends. But there is of course nothing suspect at all about it; just a welcome escape from the male-dominated Banya topics of cars, Dacha improvement and drunken adventures. So, if you do get invited to a mixed session, here or at other Banyas, I wholehearted recommend that you accept. And of course, if someone invites you to the banya at their Dacha, that’s also something to be immediately grasped. There really is nothing quite like the real authentic village deal.

So, while my tour through the best banyas that St. Petersburg has to offer was edifying, enlightening and left me cleaner than I’d ever been, nothing quite touched that seminal, spiritual experience in Omyakon. But ultimately, no matter where you find it, make sure that you don’t leave Russia without at least once enjoying the delights of the Russian banya. Even by comparison with some of the best in the world, from Turkish Baths to Japanese Onsens — and believe me, I’ve tried them all — the Banya is still the ultimate bathing experience!