Andrey Belashov, Master student of ITMO University together with his colleagues from Ioffe Physical Technical Institute developed a digital holographic microscope, which allows observing elements that are impossible to be analyzed with optical microscopes. The researchers use a specific algorithm of image processing, which helps to avoid noises without loss of quality. Previously the project was declared one of the best projects of “UMNIK” National Innovation Competition. St. Petersburg researcher also received a grant. 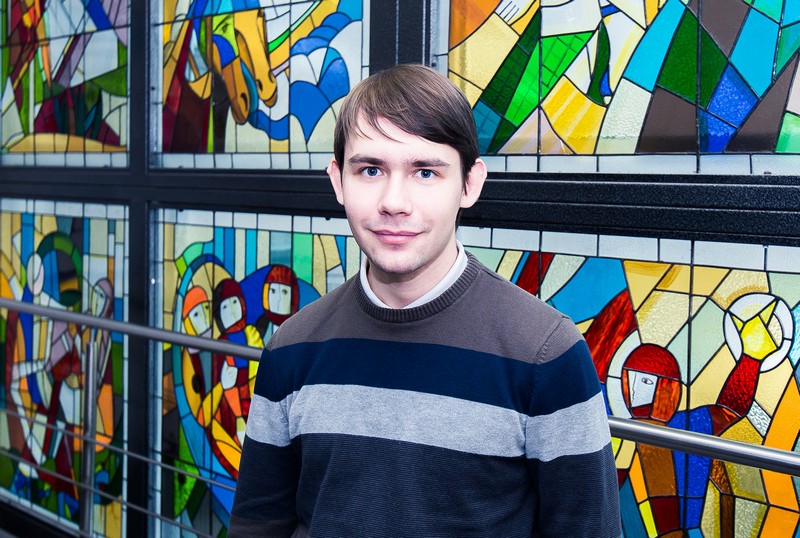 Usually one can observe cell composition with an optical microscope because its` parts absorb light in different ways. For example, the cell membrane transmits light better than the nucleus; that is why its` image is darker than the image of the cell membrane. However if each part has the same optical absorption constants their images will not be observable.

The microscope developed by Mr. Belashov, Master student of Department of Photonics and Optical Information, together with his colleagues analyzes refractive indexes. The device operation bases on a standard way of hologram making with the assistance of objective and supporting wave front.

Images of the different parts of a cell can be distinguished because parts of an image with various refractive indexes have different speed of light emission; the next reason is bent wave front. Fusing together both bent wave front and supporting wave front, which is not deformed, results in interference. Thus phase difference affects image intensity. Using special numerical algorithms the researchers process a digitally-generated hologram in order to develop an image, which looks like a thermal image: parts that have different refractive indexes are colored with different colors.

To compare the operation of optical microscope with holographic device the researchers used HeLa cancer cells given by Institute of Cytology (Russian Academy of Science). After scaling up two images (using the same magnification ratio) they came to the point that holographic microscope allows observing more intracellular components. Moreover, refractive index changes under the influence of various factors. It means that the digital holographic microscope can be used not only for analysis of a compound but also heat, chemical and impact on it.

“Our development is not pioneering because lots of scientists focus on holography and interferometry,” noted Mr. Belashov. “However we have upgraded this method. My point is that while analyzing some biological compounds strong laser radiation cannot be applied because it distorts the results of an experiment. One has to use weak radiation but it leads to low quality of an image and provokes noises. We have developed an algorithm, which eliminates noises and at the same time saves space resolution.”

The researchers are going to apply the digital holography for programmed cell-death`s research (PCD). Radiating a cell with rays that have specific wavelength provokes excited state of oxygen molecule, which is called singlet oxygen. It is used as an alternative to chemotherapy. That is why the research of singlet oxygen` mechanisms affecting intracellular components is very important for modern science. However researchers meet the following problem: it is very difficult to detect singlet oxygen using common optical methods. Nevertheless, the interaction between cellular environment and singlet oxygen results in thermal radiation, which affects refractive index changing. Thus the researchers offer to apply the digital holographic microscope for detecting this change.

The development invented by young researchers was awarded with a grant of “UMNIK” National Innovation Competition. The researchers were given 400, 000 rubles for development and upgrading the device. Mr. Belashov said that he planned to prepare his device for commercial distribution.

“First of all we need to test the microscope by providing an experiment with living cell behavior under the influence of heating and pressure. However results of this research are unpredictable. The device is likely to be upgraded. Furthermore, it was designed for experts only; thus we are also going to make it portable, ergonomic and suitable for biologists and physicians,” noted Andrey Belashov.

The researchers published several articles connected with their development. Read more on the official websites of SPIE, OSA Publishing and Technical Physics Letters.