Russian-Belgian Collaboration: Photonics, Robotics and IT

The delegation of Vrije Universiteit Brussel (VUB) visited ITMO University to discuss details of the further collaboration. Belgian researchers and officials talked with Russian experts about the potential joint projects in such promising fields as optics, computer science, robotics, bioinformatics, programming and others. Read more about the results of the international meeting. 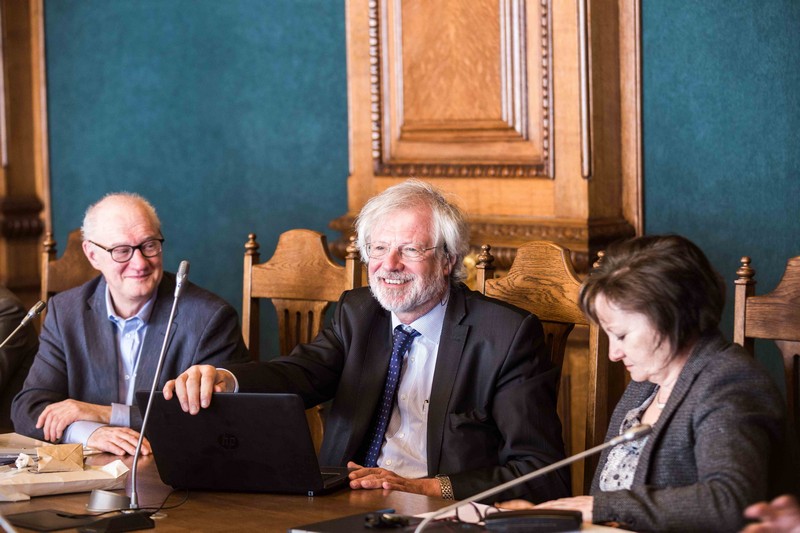 Vrije Universiteit Brussel (VUB) was organized in 1970 by splitting of Free University of Brussels (Université Libre de Bruxelles). Since then it has become larger due to VUB`s research activities and collaboration with well-known technical universities including Free University of Brussels. Currently it includes more than 150 scientific centers, most of whose focal areas are unique. VUB has eight departments both technical and humanitarian. According to QS Worldwide ranking, Vrije Universiteit Brussel places 172nd and 251-275th according to Times Higher Education.

Jan Cornelis, Vice rector for International Policy at VUB and head of Brussels delegation, noted that ITMO University previously got in contact with VUB by organizing a joint project initiated in alliance with CAD Optical Information and Energy Saving Systems Lab headed by Irina Livshits. Then VUB also provided some research activities together with Russian professors and lab researchers.

“We got acquainted with Belgium researchers in 2013 when participating in SMETHODS+ program based on European Union`s initiative FP7. The educational project was aimed at strengthening Europe`s optics and photonics industry… ITMO University was offered to join this project because it acquired a reputation for being leader in optics. Our researchers are members of various international conferences and stakeholders of events and programs dedicated to this field,” noted Ms. Livshits.

The researcher also noted that it took two years to move from local contacts to full-fledged collaboration projects. Currently CAD Optical Information and Energy Saving Systems Lab continues to work together with SMETHODS`s participants by taking part in ADOPSYS initiative, which aims to organize an international community of young experts focusing on modern methods of optical design. Thus having joined this project Nenad Zoric, researcher form Serbia, came to ITMO University to continue his academic activities in the field of photolithography.

According to Ekaterina Tulugurova, head of International Educational Programs Department, the representatives of top majors of VUB discussed with Russian colleagues such promising collaboration tracks as BigData, multidisciplinary visualization and modelling of optical systems and IT. The negotiations were also centered around sensing technologies and robotics that could be applied for developing medical equipment and technologies, interface systems as well as for human-computer interaction. Being a participant of HORIZON-2020 program VUB aspires to make a virtual association of fablabs all round the globe so as to give students an opportunity to provide their research at the top world`s universities using modern  equipment and technologies. Thus Belgian experts also visited FabLab of ITMO University.

“We have lots of common research interests! Moreover it is possible to launch academic mobility and double degree programs for Master`s and PhD students. Having signed a memorandum we undoubtedly would like to attract our Brussels Rep Office to assist us providing paperwork connected with applying for international grant programs,” said Ms. Tulugurova.

First of all the universities will organize Double Degree program for ITMO University students. Despite of the fact that all VUB`s disciplines are taught in Dutch the University also offers various programs for international students that are taught in English.

Making a summary of the meeting Jan Cornelis noted: “Previously our university collaborated only with several Russian researchers and labs. Currently we can organize large projects and also set long term goals. It means that we will get in contact with many departments and research teams as opposed to one or several. To reach this goal we have already determined several focal areas. It is also very important that ITMO University and VUB are ready to share their experience with each other and also contribute to the society`s development.”