More Than 70 Cyclists Rode With The Rector

May 18, 2016 students and teachers of ITMO University enjoyed bicycle ride around Elagin Island for the fourth time. The ride was led by the Rector of the University, the Head of the Council of Rectors of St. Petersburg Universities, Vladimir Vasilyev. 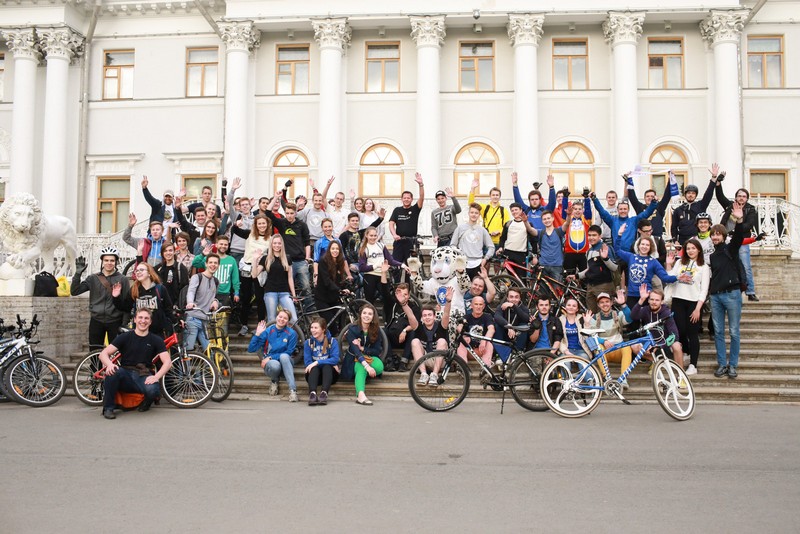 This was not the first time ITMO University cyclists rode around Elagin Island, open-air cycling became a healthy tradition after a ride in September 2014. Back then the unpredictable St. Petersburg weather almost ruined the cycling fans plans, but the organizers provided raincoats, and no one got wet. Since then three races have already taken place, and more and more people participate in them, including students of other universities: last year’s summer ride around Kirov Central Park of Culture and Recreation gathered more than one hundred cyclists.

The first ride of 2016 proved that students are fond of such kind of events. By 6 pm more than 70 people came to the second Elagin Bridge, and not only with bicycles: the Head of the Chair of Laser Technologies and Instrumentation Vadim Veiko arrived in roller skates and students with skateboards and scooters also joined in. The Rector Vladimir Vasilyev was leading the group. According to him, every morning he tries to go for a ride on his bicycle to feel well and get ready for the working day.

“I ride around Elagin Island at 6 am, and usually no one is here at that hour. But during the groups rides the atmosphere is different. We feel that we are all together, and that the university is one big family, and it doesn’t matter whether you are a Rector, a student or a teacher”, - says Vladimir Vasilyev, Head of ITMO University. In fact, in ITMO University a lot of events aimed at promoting sport and a healthy life-style are held. Most of them, for instance, the Open Festival Ready for Labor and Defense or All-Russian Club Tournament “Games of St. Petersburg”, are organized by the students of our university. The cycling ride with the Rector shows that these initiatives are supported by key management personnel of ITMO University.

“I have never missed any of the cycling rides so far, as I regard this event as a crucial element of the major promotion of sport and a healthy life-style, as well as of corporate culture among students and staff of the University, I am sure that everyone has once enjoyed a ride around a park or in the city, but the experience of a ride as part of an organized group together with your classmates, colleagues, and the Vice Rectors in the lead – that’s a completely different experience,” - states the Head of the Students Sport Club “Kronverksky panthers” Evgeny Raskin.

The next cycling ride with ITMO University’s Rector is planned for autumn.