For most people, volunteering is something questionable: it seems like something good, but why do it? And if one wants to take part in it, then how — by doing good deeds or giving to charity? Specialists from ITMO's Social Design and Entrepreneurship Center and Student Volunteering Center who organized the «From Heart to Heart» festival believe that anunderstanding of volunteering has to be taught during one's school or university years. The event took place last weekend in Alexandrovski Park and was yet another step in developing volunteering in St. Petersburg. 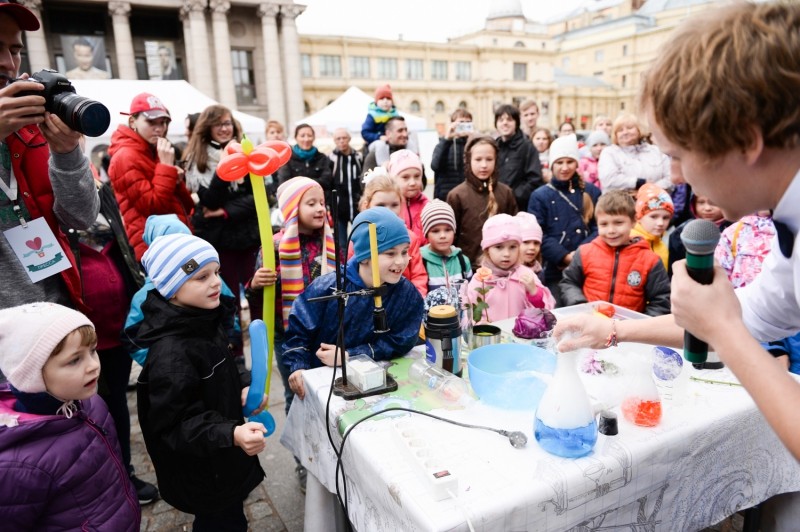 This was the second «Heart to Heart» festival in the city, and this time it included several new theme-based platforms — including one dedicated to science, where young scientists from ITMO's University Technopark and the OLYMP association presented their experiments. It was one of the most popular platforms, noted Maria Yakovleva, vice-chairman of the Student Volunteering Center.

«There were students from other universities in the organizing team as well — many of them participated in suchan event for the first time. This experience gave them a better understanding of their possibilities, increased the range of their competencies and helped them choose what they will do next. It's really important that this festival becomes widely known in St. Petersburg, that there are more and more groups that want to collaborate: they find us themselves and offer help», — comments Maria.

About a hundred people helped organize the festival, and over 700 people participated in it. Almost 45,000 rubles gathered for the AdVuta charity foundation and the «Perspectives» organization. The event became a great starting point in this new academic year for both novice volunteers as well as their more experienced colleagues, notes Andrei Zlenko, head of the Social Design and Entrepreneurship Center.

«Such local festivals are important for developing volunteering, but it is too early to conduct them at a city level, like on Dvortsovaya Square. According to my colleague's experience, few people come to such events. I think that the citizens of St. Petersburg are not yet ready to participate in volunteering and are skeptical about it», — shared Mr. Zlenko.

There may be several reasons for such scepticism. Most citizens just don't understand the difference between volunteering and community service. The first implies doing work for free. The second has to do with organizing events that promote making the world a better place — like cleaning your neighborhood or helping sick kids. Often, community service events do not imply any financing and are based on their participant's desire to help. People confuse these two concepts and thus think that charity festivals are some closed clubby events, not an opportunity to do something good for others.

Also, there is no governmental policy for creating a positive attitude towards volunteering. Social advertising for it has only started to appear in the city. Still, there are organizations and communities that actively promote and do volunteering and share their knowledge with anyone interested — for example, the «Nevsky Angel» society. It is hard to find large partner companies for conducting volunteering initiatives in Saint Petersburg, as well — according to Mr. Zlenko, in Moscow it's a lot easier.

Surely, people's suspicion plays a great role as well: many doubt that the funds gathered will really be used on charity and not go to someone's pocket. Large charity foundations arouse suspicion, like any large operations where money changes many hands.

«It's hard to understand the practice of large funds — for most, it's easier to give money to some particular child with a real problem that needs solving. Hence, transparency of all operations is of great importance. During the „Heart to Heart“ festival, we explained where the funds will go and showed that we work only with the most trusted organizations. The financial report will be published soon. We also noticed that if an event is organized by students or, small initiative groups, then it's has a lot more trust. Thus, students are good at promoting the idea of volunteering to the general public», — explains the chairman of the Student Volunteering Center, Alyona Stepanisheva. Also, today's students are tomorrows generation of socially-responsible citizens, who will graduate with a clear understanding of what volunteering is and what can one do to partake in it. In different SAint Petersburg universities, volunteering is organized differently. At ITMO, there is a multistage system of giving students different volunteering competencies. For instance, participants of the «People need YOU!» contest (which is, in essence, a volunteering accelerator) later become managers of social projects and work not only with their partners, but the community as well.

What's more, participation in such initiatives can help with finding future scientific advisors, partners and employers, as well as attreact the young to doing good deeds. For example, now students from ITMO collaborate with representatives of the All-Russian Society of Inventors and Rationalizers: together, they are developing a prototype for a device that will help people with disabilities.

«Thus, in 5−7 years a lot more adults will have a clear understanding of what volunteering is and what it’s for», — concluded AndreiZlenko.