Scientists from ITMO University in Saint Petersburg and Hebrew University in Jerusalem have found a way to recover a protein structure after its chemical denaturation. The method is based on electrostatic interaction between folded, or denatured, proteins and alumina, which unwrap them. The authors highlight the versatility of the method: it works for both specific molecules and, for the first time ever, multiprotein systems – nobody has been able to recover mixtures of enzymes before. This can help simplify and reduce the cost of the production of drug proteins for Alzheimer's and Parkinson's treatment. The study appeared in Scientific Reports. 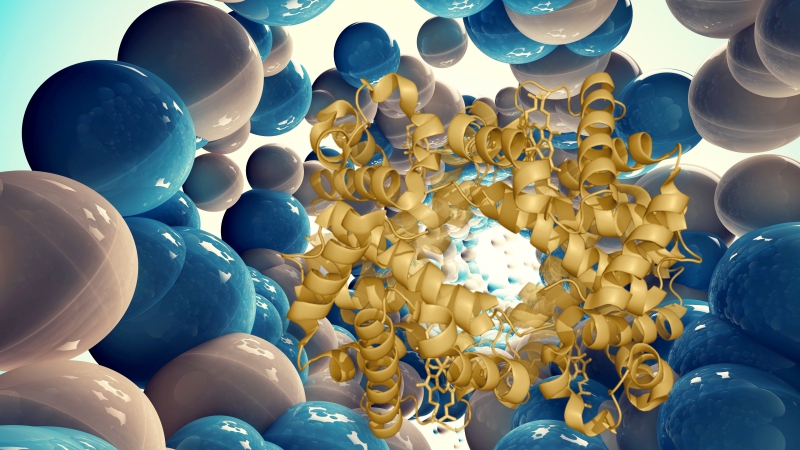 Proteins, especially including enzymes as accelerators of chemical reactions, are the basis of pharmaceutical and food industries. Meanwhile, 80% of these substances are lost during synthesis. Influenced by unfavorable factors like strong acids, alkalis or heating, proteins denature, that is they lose their original shape and simultaneously any chemical activity. Thus, the industry is looking for a universal method for recovering protein structure, which could make the production cheaper and more effective. To manufacture enzyme-based drugs and foods on an industrial scale it is especially important to find a way to recover mixtures of proteins as renaturating each particular type of enzymes separately takes a lot of time and is costly and inefficient.

Russian chemists in cooperation with foreign colleagues proposed a solution to this issue. They developed a technology process that gave a second life to proteins having returned their molecules to the original form after denaturation.

In the new research, the chemists unfolded molecules of three enzymes: carbonic anhydrase, phosphatase and peroxidase. Denatured by a strong alkaline, the proteins were mixed with nanoparticles of alumina in water. Due to electrostatic interaction, the enzymes attracted the nanoparticles and engaged them in forming a supramolecular complex with not chemical, but physical bonds.

This shell of nanoparticles protected protein molecules from aggregation enabling the scientists to easily extract them from the aggressive media. Washed from denaturing substances, the enzymes restored their structure by themselves. “Constant exposure of denaturing agents and tendency of curling macromolecules to aggregation are major obstacles for recovering proteins. When removing these factors, we were able to regenerate our objects,” says Katerina Volodina, second year graduate student of International Laboratory “Solution Chemistry of Advanced Materials and Technologies” at ITMO University.

Changing pH, the scientists separated nanoparticles from proteins showing that the substances involved in the experiment can be repeatedly used.

The authors applied their method to a mixture of two enzymes: carbonic anhydrase and phosphatase (САВ and АсР). For these proteins, the portion of renaturated molecules was more than half, which was an unprecedented result.

“Renaturating of multiprotein mixtures is a unique process; never been done before. But my colleagues and I believe that further research in this area is in the great interest of pharmaceutical companies right now. Theoretically, our method can simplify and reduce the cost for manufacturing drugs for Alzheimer's or Parkinson's therapy. Many of these medicines are made of proteins”, notes Katerina Volodina.

Besides its versatility and high performance, the technology proposed by ITMO University’s chemists is also fast and low-cost. The scientists are going to evolve the approach mostly to renaturation of proteins in complex mixtures.