Last Friday, the new laboratory center “Laser Micro- and Nanotechnologies and Systems” opened at the Department of Laser Systems and Technologies. Creating diffraction grids by using microplasma, using lasers to place tags on metal surfaces and creating functional relief surfaces - these are only some of the opportunities the laboratories offer. The laboratory's founders shared about why creating a laboratory that will always be in step with the times is so difficult, and how they succeeded in organizing one. 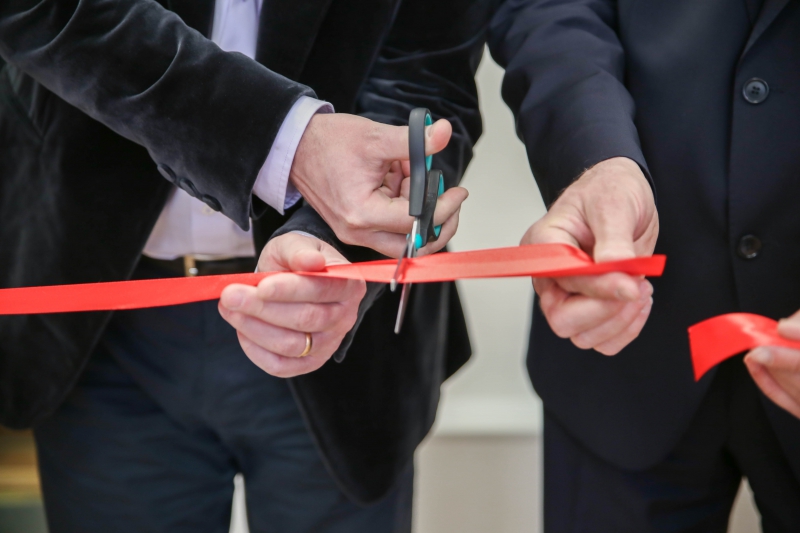 Of the three new laboratories, each focuses on its own research area: the Laboratory of Laser Microplasma, the Laboratory of Laser Nano- and Femtotechnology, and the Open Academy of Laser Microtechnology. Open Academy means that not only ITMO's staff and students will use it, but highschoolers and specialists from industry will also get the opportunity to upgrade their skills here. What is more, the Academy allows conducting a wide range of projects, from fundamental research to application tasks.

According to Vadim Veiko, one of the project's inspirers, the laboratory will mostly rely on the work of young postdocs - the recent graduates of the Department of Laser Systems and Technologies who have already defended their theses and now follow new research interests.

"The processes that we've worked out here are yet to be widely introduced in industry. As of now, almost no one uses lasers for bending and tagging metals or creating functional relief surfaces. We believe that engineers and technicians will be coming here for retraining," shares Vadim Veiko, the laboratory’s head. Among the hi-end equipment of the laboratories are different kinds of laser and measurement systems: femto- and picosecond, excimer, fiber and CO2- lasers, advanced optical microscopes, interferometers, spectrometers, an automated laser system and many more. The range of the equipments' use is most diverse: as of now, the laboratory's staff works on such projects as researching shock waves under the effect of a femtosecond laser, femtosecond laser ablation of metals and semiconductors, laser radiation's effect on transparent materials and laser surface pattering of construction materials. What's most important, thanks to the new lasers and laser systems, students following Laser Equipment and Technology, Technical Physics and Optical Equipment programs can now conduct laboratory work at the Open Academy.

Thus, the Academy solves several problems in one go. Until recently, the very idea of creating such a laboratory seemed impossible: hi-end equipment needs regular expensive maintenance, or it will break. This problem was solved with help from the laboratory's industrial partner - the Laser Center JSC.

"The equipment we use at the laboratory is most advanced, yet such equipment is constantly improved. The laboratory's industrial partners will renew the laboratory's systems, so that our students will be always using the latest inventions. What is more, we already have many ideas that can be implemented in business, though we still lack people who would agree to leave science and bring them to the entrepreneurship field," explains Vadim Veiko. "Now, technologies progress at such speed that no enterprise that's limited by finances, markets and liabilities can manage them. This is what prompted us towards close collaboration with ITMO University. We need a "live" laboratory that will make use of both new young intellectual resources and advanced equipment. The Academy solves very important tasks for both the university and the enterprise: it promotes laser technologies, develops the university-enterprise collaboration, trains qualified specialists and develops new technologies," shares Sergei Gorniy, CEO of the Laser Center JSC.

Upon attaining a particular level of technology (fiber lasers and fiber laser systems, for instance), creating such laboratories has become real. Yet, just having advanced equipment is not enough - for such a laboratory to work, it needs a strong theoretical basis and methodology. As of now, the laboratory's students and staff have laid sufficient groundwork in the field of laser micromachining: during the past five years, they've defended seven doctoral theses on metal refining and tarnishing, modifying glass and the Si - SiO2 structure; several PhD theses on metals structuring, creating Bragg gratings and glass structuring will soon be completed; more that 50 research articles were published, and more than 10 results of intellectual activities were patented.

Despite just having opened, the laboratory already has international partners: as of now, it conducts a collaboration program with France as part of the "Research and development of organization methods and properties of nanostructures based on dielectric matrixes with nano-objects under the effect of short and ultrashort laser pulses" federal targeted program, and might soon lauch a collaboration project with Greece. There is also the educational project with Lappeenranta University of Technology (Finland), and a collaboration agreement with the University of Kassel (Germany). Among the laboratory's future plans is also creating a set of laboratory classes on laser microtechnology - "Laser engineering of functional materials of photonics". Several Master's theses on this topic have already been defended, and soon, Doctoral theses will be completed as well.

"Opening of this laboratory is a great example of how science, experimental research and industry can work together. This is what our university aspires to achieve. Publishing research papers is good, but when research results are introduced into production and are in demand, when there's commercial success - it's even better," concludes Vladimir Nikiforov, ITMO's Vice Rector for Research.