On September 16-22, St. Petersburg hosted the 24th international tennis tournament ATP 250 St. Petersburg Open. In addition to exciting sports matches, its spectators could enjoy augmented reality imagery created by ITMO University specialists. ITMO.NEWS spoke with the team to learn more about their successes and the challenges of developing AR for this project. 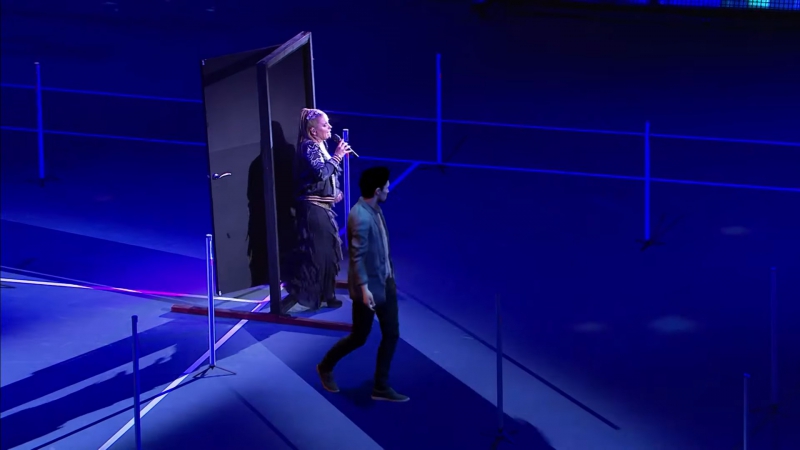 ATP St. Petersburg Open is an international men’s tennis tournament held in St. Petersburg. In 2015, it celebrated its 20th anniversary with a grandiose sporting event attended by the leading players of the ATP rankings, with Canada’s Milos Raonic claiming that year’s champion title. For the first time in the past 15 years, the 2019 tournament was won by a Russian player, Daniil Medvedev, who defeated Croatia’s Borna Ćorić in the finals.

This year, the tennis tournament was enhanced by cutting-edge AR imagery developed by the specialists of the Interactive Visualization Laboratory of ITMO University’s National Center for Cognitive Technologies. ITMO.NEWS spoke to the laboratory’s head Andrey Karsakov to learn more about the work involved.

What kind of special effects did you develop for this year’s ATP St. Petersburg Open?

Our project consisted of two parts, with the first being informational support of all matches of the tournament in terms of players presentation. Over the course of the tournament, we spent practically all of our time working in real-time mode to present the doubles playing on the main court using augmented reality technologies. Working with operational graphics has its own specifics which are different from what we had to deal with earlier in Kazan and Minsk. Especially in consideration of that, we made sure to rework our software’s toolset so that we could correct the infographics in a maximally flexible way and quickly change players’ information if and when needed.

Did the second part of your work have to do with the tournament’s closing ceremony?

It did. The tournament’s final chord was a performance by the musical headliner of the closing event, Anastacia. For this show, we’ve developed a couple of episodes using AR elements, such as the singer’s presentation and virtual decorations for one of the songs featured. But what I consider to have been the centerpiece of the evening was a duet performance of the song Safety by Anastacia and a hologram of the Russian singer Dima Bilan.

Did you encounter any challenges when developing the virtual Dima Bilan?

Our work on this performance can also be divided in two parts: the creation of graphical content and on-site work on the performance itself. The graphics part was developed by the team of WATT Studio, who did a huge amount of work on tidying up and putting together the mocap data, as well as assembling the scenes. Our task was to adapt the resulting content and oversee the on-site performance so that the graphics gelled well with the space in the right places and time. And this task turned out to be much more laborious than what our previous projects entailed. The singer’s hologram wasn’t just an additional decoration but a fully functioning agent, albeit of virtual nature. According to the scenario, Anastacia and he had to perform a fully fledged duet, interacting with each other. This meant that their actions had to be as coordinated as possible for the whole performance to look harmonious.

What is more, there were a couple of moments where this interaction had to be almost physical, with the hologram saving Anastacia from a car that jumped up in front of her and also opening a door in front of her. The latter moment turned out to be an especially interesting challenge for us: Bilan was obviously virtual and the door was very much real, so we had to hit the nail on the head with our tracking so that he could reach the door knob and it was up to the real singer, Anastacia, to then open the door and enter.

It was only recently that Dima Bilan’s hologram joined him in person to perform together. How was that act different from what you created?

This is correct, the Muz-TV 2019 awards featured Bilan performing with his holographic double, but that his was a slightly different case. That was him engaged in a dance battle with himself, he knew his steps, the timeline of the performance. But it was hard for Anastacia to, in just a couple of rehearsals, adapt not only to the venue but also the choreography of another musician. She accomplished an enormous amount of work: she flew in to St. Petersburg on Friday, and had to perform with Bilan’s hologram as soon as on Sunday. In only a couple rehearsals, we managed to bring the act to life in exactly the way it was meant to be performed!

What were you drawing on when developing the hologram?

I wouldn’t single us out as the main creators of Dima Bilan’s holographic model. This was a feat of a large, well-coordinated team that wasn’t always sitting in the same room. I would like to give credit the lead director of the event, Eva Gabulova, and her team. In spite of tight deadlines and the craziness, in the best sense of the word, of what was going on at the venue, we are glad that we had the chance to take part and that the AR tools we developed helped bring the team’s bold creative vision to life. Judging by the social media reactions, I think we have nailed it.