This year, new study equipment was added to the laboratories of ITMO University’s Faculty of Physics and Engineering. It was presented by such companies as Thorlabs, Phywe, and Holoeye, which are worldwide leaders in manufacturing research and study equipment. Read on to find out what tools are now available at the faculty, and how they will influence the practical training there. 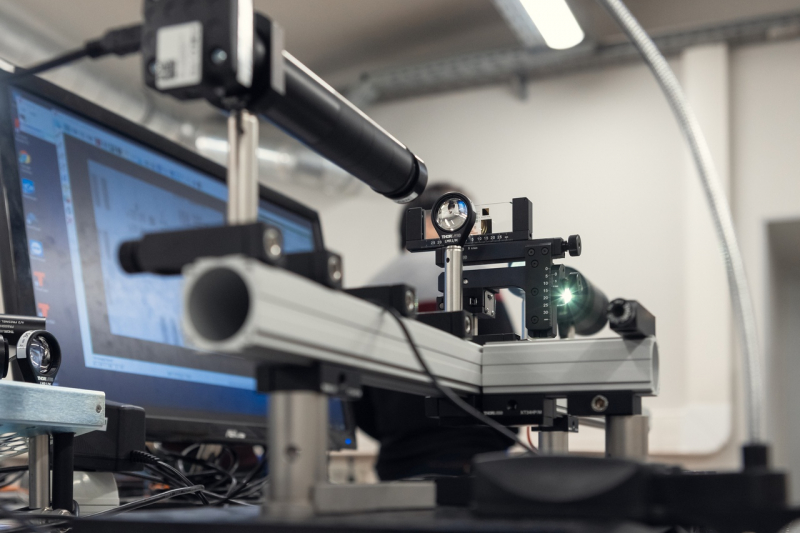 Optical equipment of ITMO University's Faculty of Physics and Engineering

Tools made by leaders of optical equipment market

Optics laboratories were augmented with equipment from the American company Thorlabs, which specializes in a wide range of products from optics and optomechanical components to measuring equipment and laser sources. The researchers from the Faculty of Physics and Engineering already use it, and now even Bachelor’s students have the opportunity to get acquainted with the modern hi-tech equipment. All equipment will be used during the practical part of the General Physics course for first year and second-year students of ITMO University.

“The earlier students learn how to work with modern equipment, the easier future independent research will be for them. The process of entering an experimental laboratory used to be quite long for the students, because they didn’t know how to work with the equipment,” says Yana Muzychenko, the deputy dean of ITMO University’s Faculty of Physics and Engineering.

This semester, second-year students of the School of Photonics will conduct experiments as part of the General Physics course. Among the new equipment there are optical tweezers, a quantum eraser, a liquid crystal spatial light modulator, as well as works on quantum cryptography and 3D cinema technologies.

Optical tweezers’ operation mode is based on the fact that a luminous flux has an impulse, and if you change its direction, a corresponding recoil impulse occurs. It slows down the movement of a microparticle by keeping it suspended.

Nowadays, there are many types of optical traps that allow us not only to suspend the microparticles, but also to cool down atoms. This technology is important for applied research, for instance, in biology. With the help of optical tweezers, biologists can manipulate various types of molecules and cells.

“The students will be able to begin their work with optical traps, to put together an entire experimental installation, to study the capture mechanism and perform it experimentally, and to learn how to manipulate the movement of a one-micron particle. Plus, this tool can be used for more complex experiments, such as for studying Brownian motion of objects,” says Ekaterina Efremova, a senior lecturer at ITMO University’s Faculty of Physics and Engineering.

Methods of data encryption have been developed and improved since ancient times. Is it possible to create fully protected data? Mathematically speaking, three conditions must be fulfilled in order to do that: the “key” should be used only once, consist of absolutely random numbers, and have a length equal to the length of the message. The main condition is to use the key only once. It was a violation of this rule that made it possible to decrypt messages by means of the well-known Enigma during World War II.

In the laboratory assignment suggested for the students, an optical analogue of the key formation and transmission is to be created with the help of basic polarization states of light (Bennett-Brassard quantum key distribution protocol, to be exact), and, above else, a covert listening device is installed.

Students will find out how data is encrypted with the help of two sets of orthogonal polarization basises, why such a key can be transmitted through an open channel, and how the covert listening device causes errors.

In the future, this assignment is to be recommended for the students of IT departments in order to get acquainted with physical principles of quantum cryptography.

The set is meant for the Optical Microscopy course, and is based on the course taught at the University of California, Berkeley. Modern optical microscopy is about university laboratories with microscopes that sometimes cost more than $100,000. There are microscopy laboratories that use femtosecond laser impulses, laboratories that reach ~3nm resolution by means of fluorescence (such resolution is much lower than the Rayleigh criterion), and biological laboratories that regularly use microscale three-dimensional optical reconstruction. Optical visualization is a modern field of science in which new complex methods appear all the time.

Assignments start with the easiest tasks that allow students to create the most simple optical system that captures images with a digital HQ camera. Then, more complex tasks related to optical aberrations, Köhler illumination, and Dark-field microscopy are to be performed.

This course’s idea is to present the main concepts used by optic engineers and microscopy specialists for projecting, calculating and creation of their own systems. Methodological support describes ten basic assignments that can be changed and expanded multiple times due to the complete compatibility of various optical Thorlabs elements.

New equipment allows us to support project-based learning, which has proved to be an effective method for increasing the motivation to study among the students.

“Typical practical training at the lab requires a specific tutorial that a student must follow in order to get the result. Quite often, students don’t even get into details and just follow the algorithm to complete it. Some of them aren’t interested in such an approach, and they want to switch from completing basic pre-given tasks to solving tasks independently. Any proposed lab assignment can be put together from scratch, so the first task for a student is to assemble an installation in accordance with the goal of the experiment. Of course, it makes the tasks harder, but students also get more involved in the experiment,” explains Yana Muzychenko.

For example, the implementation of the spectrometer circuit on your own can be a project assignment. The spectrometers used in modern laboratories are a kind of “black box” in which, on one side, there is a radiation source, and on the other, its spectrum is displayed. The laboratory set allows you to study the role of each element of the optical circuit, to see how its individual components interact.

Aside from the optical equipment, this semester the Nanoclass of the Faculty of Physics and Engineering has been opened. The Nanoclass is equipped with installations developed and manufactured at ITMO University’s Technopark by the NT-SPb company. Among its  equipment are four scanning microscopes, an installation for the manufacture of nanoprobes, and virtual training tools. Previously, the Nanoclass’ equipment was used during the Sirius summer camp’s project shift, and at the summer practice for gifted students of St. Petersburg schools specializing in mathematics and physics. Now, ITMO University students also have an opportunity to apply it too.