The last changes to the Periodic Table, which will celebrate its 150s anniversary this year, were made in 2016. Then, it was complemented with four new elements: moscovium (115), tennessine (117), oganesson (118) and nihonium (113). The latter was discovered by scientists from RIKEN, a major Japanese research institute. The new element’s name stems from “nihon”, one of the two Japanese pronunciations for the name of Japan. We spoke to Hideto Enyo, Director of RIKEN Nishina Center for Accelerator-Based Science, about the synthesis of elements, science communication in Japan, and their key research tasks. In July 2019, Dr. Enyo will be one of the speakers at the 4th International Conference on the Periodic Table that will take place at ITMO University. 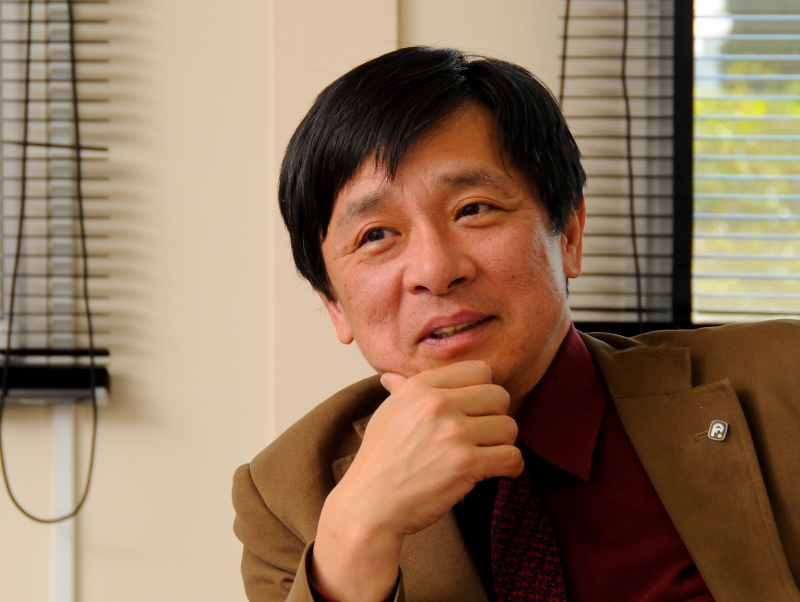 Elements that are heavier than uranium (atomic number 92) don’t exist in nature; still, they can be produced, for example in nuclear reactors. That being said, you can’t use a nuclear reactor to create elements that have an atomic number higher than 100 (fermium): you’ll need accelerators where superheavy nuclei emerge as a result of a collision between “beam” and “target” nuclei. At first thought, this task seems very simple: you just take two atoms with a sum of protons equal to that of the new desired element, collide them using an accelerator, and get a new atom. In reality, it is much harder: it takes years to pick up the beam and target that can fuse into the nucleus of a new element.

Since the beginning of the 2000s, these teams worked on producing the 113th element of the Periodic Table. The results of joint research on the issue by the Flerov Laboratory of Nuclear Reactions of the Joint Institute for Nuclear Research and Lawrence Livermore National Laboratory were published in 2004.

And in September 2004, a research team from RIKEN announced that they succeeded in synthesizing an isotope of the 113th element by fusing nuclei of zinc and bismuth. In several years, they registered three instances of producing atoms of nihonium: on July 23, 2004, on April 2, 2005, and on August 12, 2012.

On December 30, 2015, IUPAC officially recognized the discovery of the 113th element and assigned its priority to RIKEN. This way, it became the first element to be discovered in Japan and in an Asian country in general. Half a year later, the element was named nihonium (Nh) after one of the two native names of Japan, which translates as the “land of the rising sun”.

Nihonium is an element of the boron group, but it behaves more like a transition metal. According to calculations, its melting point is at 430оС, and boiling point is at 1100оС, which makes it different from the elements of the same group that melt and boil at significantly lower temperatures. The half-life of its most stable isotope Nh-286 is 20 seconds, which makes it a real long-liver amongst others.

Specialists associate such a long half-life with the fact that nuclei with a particular number of protons and neutrons are more stable than others. According to the Mayer-Jensen shell model, the number of nucleons (protons and neutrons) has an effect on the bond energy. Elements which nuclei consist of 2, 8, 20, 28, 50, 82 and 126 nucleons are more stable, as all of their nuclear shells are filled. This sequence is called “magic numbers”, which references to the empirical nature of this theory. It also forecasts the existence of an “island of stability” for transuranium elements. Its “inhabitants” have a longer half-life than their neighbors in the Periodic Table.

We spoke about synthesis of elements and key research tasks with Dr. Hideto Enyo, Chief Scientist of RIKEN’s Director of Nishina Center for Accelerator-Based Science.

The 113th element of the Periodic Table, nihonium, has become the first element to ever be discovered in Japan, and in Asia in general. How much time did this discovery take?

We spent nine years on experiments. And before that, we’d spent five years on preparations. On the whole, a lot of people worked on this discovery, more than 50 researchers.

Nihonium has peculiar physical and chemical properties. Does it have any promising applications?

This is a purely scientific discovery, and I doubt that we’ll be seeing any practical applications in the next hundred years. For now, we simply know that it exists, and there are even heavier elements. But its discovery is very important from the scientific standpoint. In particular, it speaks to the fact that there might be even more elements in the Periodic Table, and they can be more stable. Finally, this discovery is very important to Japan, as now we have an element that has been produced here.

What will be your future tasks in this regard?

We want to discover the “islands of stability” that include elements that might be not as heavy as nihonium, but stable nonetheless. In the future, I would like to witness the discovery of such a stable element that wasn’t created by the Universe but by us. This is what I dream about.

Does the process of discovering new elements change with the years? What is the difference between how they discovered new elements of the Periodic Table 50 years ago and how they do it now? How does the technological progress benefit scientists in this regard?

It does change, in a sense… You could say that before, we were digging into the ground to find a new element or a mineral that contained it. This is how the Periodic Table came into being. But this stage came to a close, as there’s a limited number of elements that exist in nature. Then, the nuclear bomb or reactor were created, and humanity learned to produce many new elements. Finally, we learned how to create new elements with the help of an accelerated beam. After the discovery of nihonium we are currently improving our accelerator, and in addition to the search for other new elements we will soon be able to create new types of radioactive isotopes that could be applied in treating cancer.

You laboratory is engaged in a wide range of both fundamental and practical research projects. What are your current key tasks?

Nowadays, we aspire to produce new isotopes with a large number of protons in nuclei, we also want to produce known and existing elements but with a greater number of neutrons. This is almost like alchemy, and it could be said that we’re creating a new isotope that is very different from its stable form. As of today, we are at the top among the leading research institutions in producing new isotopes. In order to understand mechanisms which have synthesized all the elements in the Universe, we need to study exactly how these unstable isotopes are different from unstable ones, and how they interact in the explosive events in the Universe, such as supernova explosion or neutron-star mergers.

Do you collaborate with any foreign research teams, Russian teams in particular?

You must be well acquainted with Russian scientist Yuri Oganessian. Kosuke Morita, the scientist who discovered nihonium, had once worked with him; then, he returned to RIKEN and started his own experiments. So, in some sense, Yuri Oganessian is nihonium’s grandfather. We maintain a rapport, though in this particular research we were competitors. So sometimes, we compete with others, and at other times, we collaborate on common projects.

There are various theories: some say there are 170 elements, some say there are 140 or so. The more relevant question is how much further we can advance. In order to produce new elements, we need to develop a new approach. It may well be that we’ll witness the discovery of some of these new elements in the next ten years, but no one can tell you their exact number. Still, I believe that we need to develop very new technologies necessary for producing much heavier elements.

First of all, I am interested in the conference’s range of topics and the lineup of speakers. I want to listen to my colleagues, other scientists, and speak with them about the Periodic Table. I am also interested in speaking about sustainable development, which is also among the conference’s topics. I am very keen on this subject, and I’ll be glad to take part in this discussion.

I’ve been to St. Petersburg before. That time, we were going to Kizhi, and in order to get there, we had to take a train from St. Petersburg. At that time my available time was very short, so I really want to see your city once again.

One of the goals of the International Year of the Periodic Table of the Chemical Elements is to not just let scientists communicate with each other, but to also conduct various educational events and promote science. In your opinion, do scientists really need to explain their research to the general public?

We have to be really talented in order to explain the essence of our inventions in layperson’s terms. I believe that meeting with the general public and speaking to them in a language they can understand is very important, as this is the future. Even when it’s adult people that we’re speaking to, we have to understand that these people have children. In future, some of them can become scientists. This is why we have to work with different kinds of people: young, elderly, and children. It is essential to explain why science is interesting and important, to kindle the interest in what we’re doing.

We do a lot in this regard. Recently, I’ve watched a video of the opening ceremony of the International Year of the Periodic Table of the Chemical Elements in Paris, and there were many Russians who came with children, young colleagues and students. In Japan we’re trying in a similar way, but we don’t have it as good as you do. So, I think we can learn many things from you.

You said that it is necessary to cultivate one’s love of science from childhood. Which scientific idea or invention prompted you to become a scientist?

I had a toy. It could move around, make different sounds, lights and so on. Once, I decided to disassemble it. Apart from wires and cogs, there was a big flywheel in it. This is how I learned about the law of conservation of energy, or, to be more exact, the law of conservation of angular momentum. I learned that this flywheel made my toy move. I was about four or five years old, and eventually, my toy was broken and stopped moving around, but I can say that this toy had become my first physics teacher.

In your opinion, which is the best way of kindling people’s interest in science?

Have you ever heard of “science moms” or “science dads”? It is when one’s mother or father love science. I think that if parents are engaged in science in any ways, then their children will also become interested in it. It is not the higher education that kindles this interest, but life, their scientific life. So I think that the best way to create a scientist is to start with one’s family.

Dr. Hideto Enyo is  Director of RIKEN Nishina Center for Accelerator-Based Science and the Chief Scientist of RIKEN’s Radiation Laboratory. RIKEN is a major Japanese research institute. It is almost completely funded by the Japanese government and has a budget of about 88 billion yen (760 million USD). RIKEN conducts research in many fields of science: physics, chemistry, biology, medicine, engineering and computer sciences.