Vivid holographic images and text can now be produced by means of an ordinary inkjet printer. This new method, developed by a team of scientists from ITMO University, is expected to significantly reduce the cost and time needed to create the so-called rainbow holograms, commonly used for security purposes - to protect valuable items, such as credit cards and paper currency, from piracy and falsification. The results of the study were published in Advanced Functional Materials scientific journal on November 17. 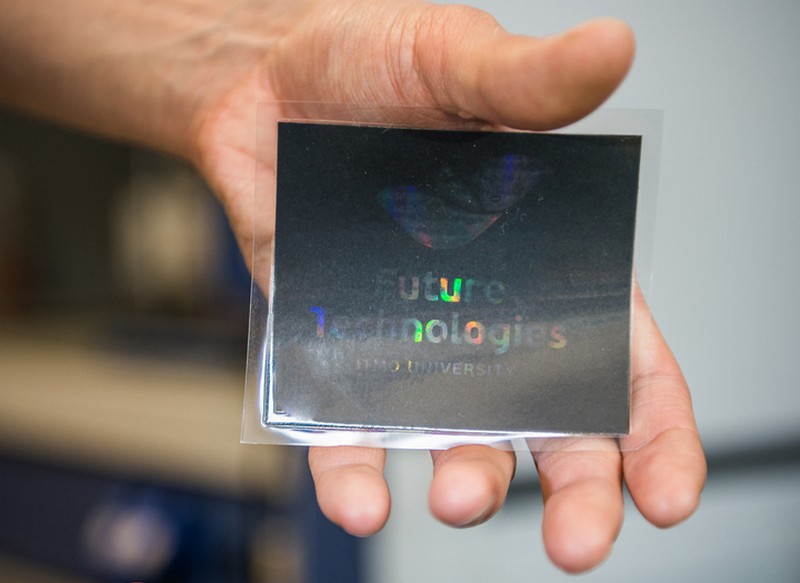 The team, led by Alexander Vinogradov, senior research associate at the International Laboratory of Solution Chemistry of Advanced Materials and Technologies (SCAMT) of ITMO University, developed colorless ink made of nanocrystalline titania, which can be loaded into an inkjet printer and then deposited on special microembossed paper, resulting in unique patterned images. The ink makes it possible to print custom holographic images on transparent film in a matter of minutes, instead of days as with the use of conventional methods.

Rainbow holograms are widely used to fight against the forgery of credit cards, money, documents and certain manufactured products that call for a high level of protection. Even though the technology of obtaining holographic images was already developed in the 1960s, there still exist numerous technical difficulties that impede its further spread and integration into polygraphic industry.

"The conventional way of preparing a hologram is incredibly time-consuming and consists of several stages. First of all one needs to create a master hologram, which is usually laser recorded on a thin layer of photosensitive polymer. The polymer is then dried and unexposed parts are washed out," explains Aleksandr Yakovlev, first author of the study and researcher at the SCAMT laboratory. "The resulting stencil is then transferred to a metallic matrix, which eventually serves to emboss holographic microrelief on the surface of a transparent polymer film."

According to the scientist, in total, the whole process of obtaining a holographic image may take up to several days. Even more, to prepare a master hologram, a set of very rigid requirements must be met - temperature control and vibration isolation among them.

"Printing separate holographic images in a quick and effective manner is a challenge that, until now, has been unresolved," adds Aleksandr Yakovlev.

The new nanocrystalline ink makes it possible to cut the expenditures related to the production of rainbow holograms by several times. The ink is applied with a simple inkjet printer on a microembossed surface, which is afterwards covered by varnish. As a result, the holographic image is exclusively seen in those areas, where the protective ink was deposited.

"The peculiarity of our ink is high refractive index in all visible range of light," says project supervisor Alexander Vinogradov. "The use of nanocrystalline ink forms a layer with high refractive index, which helps preserve the rainbow holographic effect after the varnish or a polymer layer is applied on top."

The new technique provides obtaining holograms of practically any size, makes the process easier and cheaper and, for the first time, leads to the development of unique custom holograms in a matter of minutes.