The international METANANO conference on nanophotonics and metamaterials has just finished in Anapa. During these 5 days scientists presented more than a hundred reports, negotiated on future collaborations (including the creation of an affiliated department at ITMO university), as well as enjoyed one of Russia's most sunny cities. This article is on the conference's best reports, results, and plans for METANANO-2017. 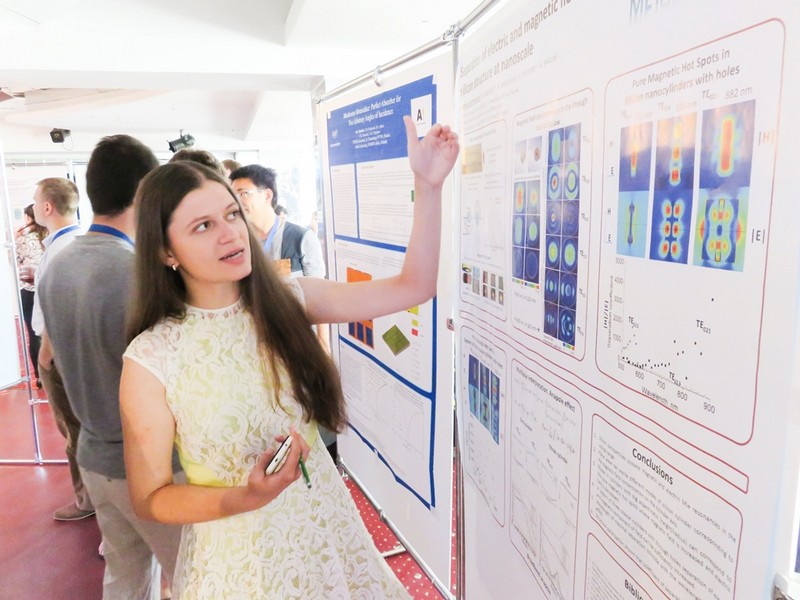 During the last several years, the conference has become popular among scientists worldwide. ITMO University got the right to organize the event in Russia due to support from Mr. Alexei Kavokin, head of The Mediterranean Institute of Fundamental Physics and the founder of the conference, as well as funding from the Russian Science Foundation.

"There were not only scientists from foreign universities at the conference but also many colleagues from Russia as well. We've made a lot of effort to conduct the conference at a high level, and, I think, we succeeded. We accomplished all we planned for and as of now, we have received only positive feedback. This means that the next conference (it is to be organized by our department of nanophotonics and metamaterials, as well) will have a good credit history, so to say" - noted METANANO's co-chair, Mr. Ivan Iorsh.

The reports at the conference had to do with the most pressing questions of fundamental physics and experimental science in the fields of nanooptics, plasmonics, quantum physics, metamaterials, photonics and other. The poster session of the conference where new scientific concepts and results were being discussed was really popular as well. During the plenary session, scientists from Russia, Denmark, Germany, Portugal, USA and other countries made their reports. Topological materials for light and sound

Modern communication systems process great amounts of data. The limitations to data processes here are due to the properties of existing electronic devices and optical technologies. Electronic metal microchips work too slow, but they are nanoscale. Optical dielectric microchips have a higher information capacity, but they are too big. The problem is that the minimum wavelength of the visible light is about 300 nanometers, and modern microchips work in scales of tenths of nanometers. Thus, combining two properties in a chip - smallness and high capacity - has been impossible for a long time. Still, surface plasmons can change this situation. Those are quasi-particles that result from the interaction of light waves and oscillations of electrons in conductors. Their electromagnetic wavelength is always shorter than in dielectrics. Thus , plasmonic microchips are promising, as they combine the smallness of electronics and the operation speed of optical networks. Mr. Volkov spoke of the latest inventions in this area, as well as demonstrated prototypes of supercompact plasmonic components that signify the creation of a new class of integrated optical microchips.

In recent decades, the introduction of photon crystals led to principal changes in all optical technologies. Several years ago it was discovered that light distribution in photon crystals can depend on topological properties. It was also believed that topological effects can establish only in crystallite media with a periodically changing inductive capacity. In his report, Mr. Silverinya spoke of the possibility of topological effects in continuous systems. Non-trivial topological effects in a static electromagnetic field are related to the emergence of edge states. This allows one to apply the theory of electronic topological insulators in the optical systems field. In the future, this can influence the development of wave guides that can then lead to the creation of topologically protected optical communications. Nanoparticles for brain mapping and stimulation

Mikhail Barabanenkov, Institute for Solid State Physics of the Russian Academy of Sciences

Nanoparticles can have medical and nanobiological applications - thanks to the phenomena of plasmonic resonance. For instance, one of the recent trends in modern science has to do with implantation of nanoparticles into biological tissues for visualization of cells, delivery of drugs, defining different conditions, etc. The latest inventions allow us to use semiconductor nanoparticles for brain stimulation - without using any wires. Metal nanoparticles with plasmonic resonance can combine in clusters or even chains of clusters in biological tissues by transferring excitation to each other. There are still challenges to this field: the emergence of collective mods of different shapes in clusters; creating conditions for interaction between nanoparticle chains for wireless brain stimulation; creating conditions for interaction between the internal and external parts of the nanoparticle grid to reflect the latest interactions between the brains major neural networks. In his report, Mikhail Barabanenkov presented the latest research in this area.

The enhancement of sensors based on surface plasmonic resonance

Daria Ignatieva presented the latest invention of her research team - a plasmonic magnetophotonic sensor heterostructure that has really high quality of defining the constants of binding macromolecules with the help of the surface plasmonic resonance phenomena. As of now, sensors based on this phenomena are widely used in medical, biological and chemical research. Yet, an essential drawback is the vast area of the resonance effect, which is a consequence of the presence of metal particles in the device. Moscow State University's team proposed methods to correct this and raise the sensor's efficiency. After the plenary sessions the participants discussed the reports, as well as prospects for cooperation. Representatives of ITMO University and Russian Quantum Center negotiated on creating an affiliated department of the Center at ITMO. Representatives of the Institute for Solid State Physics of the Russian Academy of Sciences also expressed interest in cooperating with the Department of Nano-photonics and Metamaterials - both institutions work on combining metasurfaces with exciton polaritons.

Aside from great working conditions, the guests of the conference greatly enjoyed Anapa - during their free time, the scientists played sports, went swimming and experienced the local culture. During a break between the conference's workdays its participants had a guided tour at the renowned Abrau-Dyurso winery. In its vaults, bottles of champagne are stored in stacks. A staff member of the Ioffe Institute Mikhail Limonov noted that the method of laying the bottles is similar to the periodic structure of photonic crystals, and even mistakes in the laying can be compared to defects in real crystals. He used this analogy as an illustration to his report on the phase change from photonic crystals to metamaterials. At the closing of the conference, the plans for the METANANO-2017 were discussed.  The conference will be held in Vladivostok, Russia - the city where Far Eastern Federal University is located.