School Student Does Research on Holographic Paradigm of Artificial Intelligence

How can one manage to keep winning regional competitions in several subjects at once, study mathematical models of  artificial intelligence under the guidance of an ITMO professor, and participate in the Congress of Young Scientists while still being a 10th grade school student? ITMO.NEWS interviews Dmitry Vladimirtsev, an aspiring researcher who is currently studying at Lyceum № 239, on his recent research and future plans. 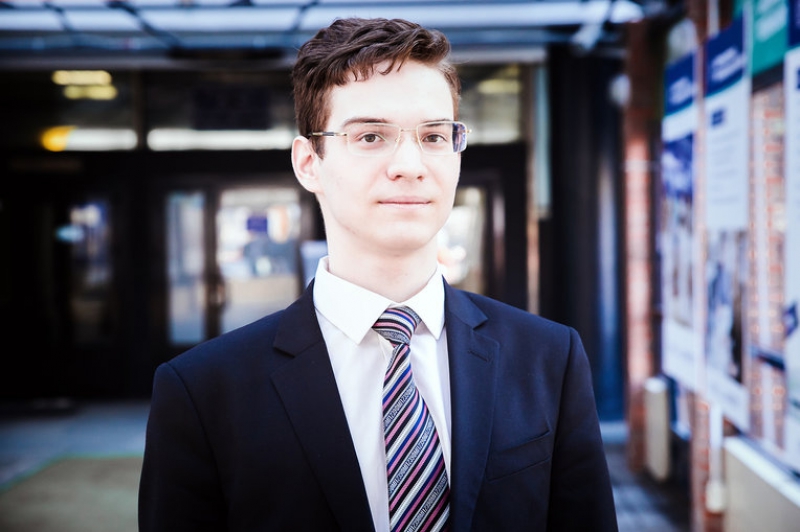 Please tell us about the research you presented at the Congress of Young Scientists.

I presented a research project on the holographic paradigm of artificial intelligence. Nowadays, it is commonly believed that artificial intelligence is a result of machine learning and the work of algorithms. Yet, this is just one of the many conceptual approaches that can be made use of in development of AI. This is a computer paradigm that is based on the idea that the workings of the brain can be programmed, i.e. that it’s possible to simulate these processes with the help of programs and algorithms. Still, it is not always possible to make the computer work similar to how a human brain does. Even though much research is conducted  in this field, and the 21st century being the century of information technologies, there are still many creative tasks that AIs that are based on the computer paradigm can’t solve. For one, the existing AI systems lack capabilities that are based on inductive inference - this cognitive function is still the domain of humans only. In order to make up for this deficiency, scientists are working on non-classical paradigms that align with physics, biology and chemistry. One of those is the holographic paradigm.

How does holography align with the AI paradigm?

Holography is the method of recording and restoration of wavefronts. The holographic paradigm in cognitive psychology was first introduced by psychologist Goldscheider in 1906. He defined the interaction of different cerebral processes as interaction of wavefronts. But holography only came about in the second half of the 20th century. That said, when talking about the holographic paradigm of AI, we are referring to the principle of Fourier hologram, when we shine light on an object with a signal and reference light and get two images of the object, i.e. a pair. We can get one, two, three or more pairs. As a result, we get an induced image where the differences between pairs will be in grey light, and the common features will be highlighted. In terms of AI, that would be a common concept based on several patterns.

So you are not talking about the same kind of holography that is being displayed on computers?

Surely not. This is not about comparing holography processes and brain functions, but the mathematics that is used in computing both holography and brain functions. Thus, we are talking about the fundamental mechanisms of cerebration and holography, where mathematical principles allow to get the above mentioned induced image, about processing images using the algebra of  Fourier-dual operations.

Where can this holographic paradigm be used?

In security systems, for example. In the subway, they use security cameras featuring face recognition. It would’ve been nice if they could recognize faces based on one’s overall image and not just certain features: this way, even if someone shaves off their moustache, for instance,  or puts on a hat, the face would still get recognized based on the form of their nose, ears, cheekbones. This way, the AI would account for different features in order to form a common concept.

What were the goals that you had set for yourself when conducting this study?

This research is a continuation of a research by my research advisor, Aleksandr Pavlov, who is an Associate Professor at ITMO’s Department of Photonics and Optical Information Technologies. My work was dedicated to studying the factors that can affect the efficiency of image recognition; I’ve come up with a theoretical formula that is close to the experimentally-derived formula for calculating it. Surely, it needs to be finalized, and I need more data to do that; actually, I’m really looking forward to improving my formula.

How did you come to collaborate with an ITMO lecturer?

I started to go to the Research Workshops of Lyceum #590. School students can go there to develop their projects. Aleksandr collaborates with these workshops, and when I said that I want to do a project in the field of holography and wave optics, they referred me to him right on the spot.

Did you choose your topic yourself?

No. When I first met Aleksandr Vladimirovich, I told him what I wanted to focus on, and shared several ideas. I thought: what if we were to produce the diffraction grating we get from holography on a smartphone screen rather than a plate, and delineated the pros and cons of such an invention. But it turned out that I was reinventing the wheel: Aleksandr told me that there’s already research being done in that field, and I won’t be able to do much with my current level of knowledge. He proposed researching the holographic paradigm of artificial intelligence, and I agreed. The great thing is that Aleksandr has a grant from the Russian Foundation for Basic Research for this topic.

What motivated you to start with this research?

Truth be told, I didn’t even think about artificial intelligence when I started, I was interested in holography only. I really liked these three-dimensional images, they are really beautiful. And I am the sort of person who’s fast to switch from appreciating the beauty of something to studying it, as I might be able to do the same with the right equipment. So, I decided to read some literature on holography. I was mostly interested in mathematical models, as I came to understand that if you understand the math behind it all, you can bring the physics into it. Some time later, I did a report on optically active compounds. I found a thesis research on wave optics by an Associate Professor from the National University of Kharkiv; as a result, the report I had to do for the chemistry class was more about physics.

Therefore, you prefer to work with mathematical modeling and fundamental science?

For now, I don’t have sufficient knowledge of physics, so I’m trying to do my best by using mathematics instead. I mean, understanding the basics of physics and knowing the advanced stuff is totally different. As soon as I learn more, I’ll be able to work with physical models, as well.

So, how do you bring physics into mathematics while lacking knowledge of the former?

In general, you have to have some basic knowledge of physics in order to understand particular laws. Still, it is possible to use mathematical formulas and equations, as well as analogies from the fields of physics you are familiar with, to understand wave optics.

What do you think of other projects presented at the Congress of Young Scientists?

I liked many of them, especially one project by a student from my school carried out in collaboration with some other students; it was on laser labeling of food products: apples, bananas, cucumbers. Some reports, I found hard to comprehend, as the practical application of the research was not clear to me, like the one on the optical properties of gelatin; in some cases, the theory behind the projects was just too complex for me to understand. Still, the presentations by other participants helped me learn about the level of knowledge in optics that other high school students who will soon apply to university possess.

In the light of your observations, what kind of knowledge will you need to get better at?

Naturally, that would be wave optics. When talking about my future career, I don’t want to spread myself too thin, but rather be a dedicated expert in a particular field. Though it is common practice to train for the Unified State Examination, I don’t really do that, as the training we get at Lyceum #239 is really good, and our students show great results in different competitions. I also take part in many of those, and I’ve already become an award winner of the Engineering Competition for School Students in physics, which, as I know, is already enough to enroll at ITMO University’s School of Photonics. In general, I try to participate in every competition I can, especially those that are included in the list of the Russian Council of School Academic Contests. This year, I’ve already become a regional award winner in Computer Science and Chemistry, as well.

How do you manage to do research and also participate in all those competitions?

Surely, time is an issue, but I still try to not overexert myself, as it becomes really difficult to study different fields of science simultaneously. So, I do my best to take walks, spend time with my friends, and listen to music so that I can relax.