The 19th International Youth and Student Festival has come to a close in Sochi. At the event, young engineers and inventors have presented more than 125 innovative projects at the occupational guidance exhibition Youth Expo “New Technologies and Innovations”, organized by the Russian Ministry of Industry and Trade. Among these cutting-edge projects, three were created with help from ITMO University: the NanoTutor scanning probe microscope, the MicProbe scanning probe module  and new nano-ink for jet-printing luminescent holograms and document protection. The Ministry of Industry and Trade has expressed its intent to support the best projects presented at the expo; among them are ITMO’s products. 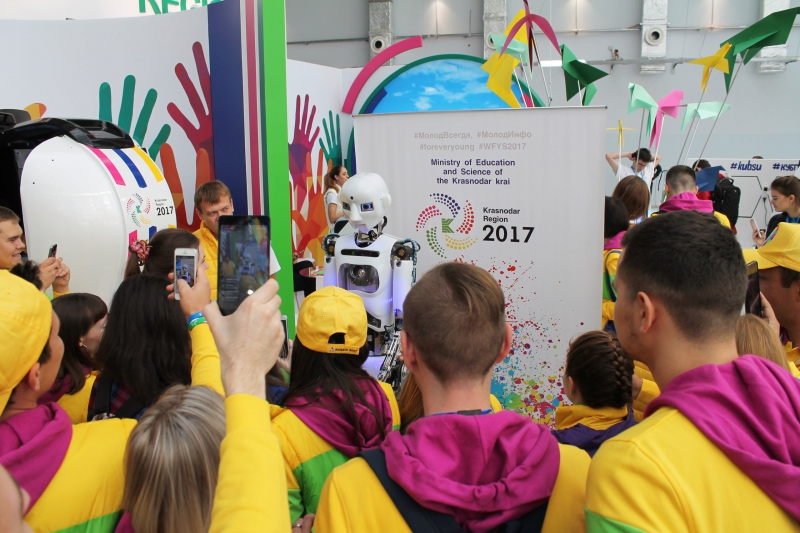 Projects by inventors from all over Russia were showcased at the exhibition. The event lasted 12 days and welcomed guests from 185 countries.

Denis Manturov, the Minister of Industry and Trade, spoke to the young inventors, examined the projects on display and pointed out eight of them, which, he believes, have potential for commercial application. The shortlist includes two projects by ITMO University – the microscopes developed by the NT-SPb enterprise, a resident of ITMO’s Technopark. NanoTutor is a scanning probe microscope and MicProbe is an optical microscope combined with a scanning probe module. Among the most promising projects were also a compact air-jet engine, an unmanned tilt-rotor drone, the KamAZ driving simulator, the KhitoPran bioplastic healing material, multi-factor cosmetics and a surgical robot. On October 25, after the festival had ended, head of the Ministry’s Strategic Development and Project Management Department, Alexey Uchenov, organized a meeting with the teams of these projects. At the meeting, possible strategies for the development of each project were discussed. Representatives of the Ministry’s departments were present and participated in the discussion.

The young inventors described their projects, their future potential and the issues that these projects face in regards to their integration on the Russian and international markets. The officials, in turn, proposed partnerships to the young engineers, outlining their possibilities for working with specific industrial departments of the Ministry. It was agreed that each of the projects will be supervised by a particular department. Nina Yanykina and the Mukhin brothers. Credit: Ministry of Industry and Trade

To discuss their future development prospects, research associates Ivan and Mikhail Mukhin from ITMO’s Department of Nanophotonics and Metamaterials, as well as head of Project Management and Innovation Department Nina Yanykina went to Moscow to attend the meeting. Minister Denis Manturov, in turn, suggested that they collaborate with the Ministry of Education and Science on a strategy for the introduction of scanning probe microscopes into the list of required technical equipment for new schools.

“This is an important occasion for both NT-SPb and ITMO University; we’ve successfully passed through several “filters”. Firstly, the university’s expert committee had chosen three projects to represent it at the festival; then, out of all Russian projects, the best were selected, including all three of ITMO’s projects; finally, out of these 40 the 8 best projects were chosen – our two projects among them,” – shares Ivan Mukhin.

The proposal for the introduction of new equipment to Russian schools involves both of NT-SPb’s microscopes. The Ministry of Industry and Trade will now collaborate with the Ministry of Education and Science on the inclusion of ITMO’s scanning probe microscopes into the list of mandatory equipment for educational organizations. As of now, the list of required equipment for elementary, middle and high schools does not contain any counterparts to these devices. “The Youth and Student Festival, and particularly the occupational guidance exhibition Youth Expo “New Technologies and Innovations”, has allowed the Ministry of Industry and Trade to outline the pool of projects the development of which they are interested in supervising. It’s highly important that we will represent the young specialists supported by the Ministry,” – explains Ivan Mukhin.

According to Alexander Golubok, professor at ITMO and CEO of NT-SPb, educational institutions will benefit from not just the microscope itself, but the educational content it provides. Each device is supplied with a specially-designed set of educational materials in two parts. The first one explains the device’s structure, how it works and provides a list of simple lab tests that can help school students familiarize themselves with the equipment. The second book describes interdisciplinary research projects that can be performed using these devices. These projects can be worked on by teams of students with competencies in various fields. One such team might include a physicist, chemist, biologist, programmer and an economist. For six months, school students will develop projects using the microscope and use their results to apply to the Sirius school, a Quantorium or any other educational center. Use of the new equipment in schools is intended to foster interdisciplinary project work. “Project work at schools is encouraged, but how well is it implemented – and how ready are the teachers? As part of Quantorium, we will soon be receiving a group of educators from various regions who we will teach to conduct research and engineering projects in nanotechnology. Working with them will allow us to find out what happens in the regions and how ready they are for project work. It needs to be understood that nanotechnology is a great area for interdisciplinary work, as it employs the methods from various disciplines. One way or another, it intertwines physics, chemistry, biology, computer science and others. It is a prolific field in which we need to seek out and develop exciting projects,” – shares Mikhail Mukhin.

The Ministry of Education will also include the developers in its decree 218 on the innovation infrastructure in education, which concerns the commercialization of university projects by industrial enterprises. This will let the university gain funding for the project’s later mass production.

NT-SPb’s NanoTutor microscope is already used in 18 schools of St. Petersburg and several regional Quantoriums; teachers received special training from ITMO University in order to ensure the proper use of this equipment by school students. Such nanotech set-ups have also been provided to two Italian universities.

In addition to the microscopes, ITMO University was also represented by SCAMT Lab’s jet-printing specialists. Their device demonstrated their invention to all visitors while the representatives described their product – a nano-ink for hologram printing and document protection – and its capabilities.