On Monday, 23 May, ITMO University hosted a meeting for IT developers with students from the University of North Carolina Kenan-Flagler Business School, during which representatives of the two countries worked together on strategy for Russian startups entering the Western market. 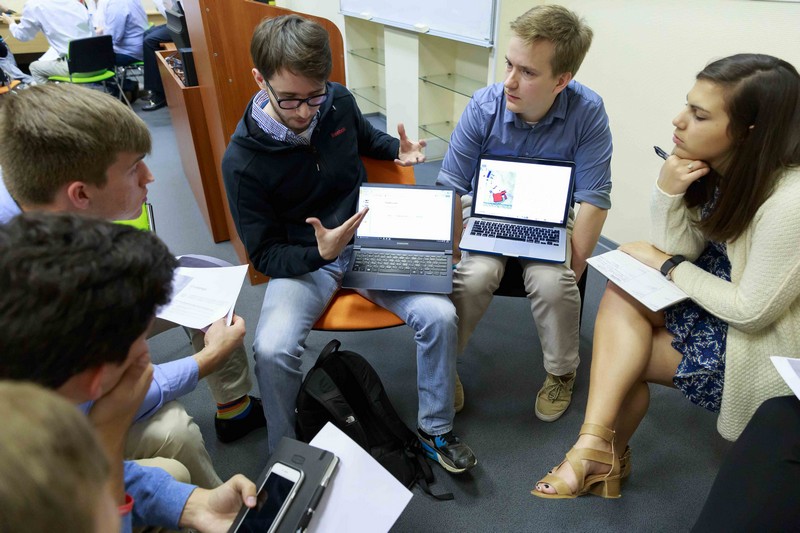 Chip Snively, director of the Capital Markets Lab at UNC Kenan-Flagler Business School, explained that for students enrolled in business programs, University of North Carolina at Chapel Hill organizes opportunities to exchange experience with representatives frm various parts of the world. The original purpose of the trip was to visit Aalto University in Finland, but the geography of the trip allowed the group to expand their horizons so that these future financial and business experts could also meet colleagues from Russia and Estonia. “Now we’re just making the initial contact, we are making the first connections between our universities and looking at what ideas, interests and experiences we can share. We all want kind of the same things, to find new ideas. Some people are philanthropic in their ideas, they want it for the good, but lots want it for profit as well. We all want the same thing, and I want our students to understand that there’s no other way to do that unless they interact with others on a personal level," said Chip Snively.

Representatives of the Department of Project Development and Innovative Activities at ITMO University, held a lecture on the current state of Russian innovation infrastructure for their guests from the USA. They also ran a series of workshops, revealing the peculiarities of technology transfer in those countries that were part of the former Soviet Union. The visit of students from North Carolina ended with a training which included IT developers from ITMO University, during which they made plans for promoting Russian startups in the West using the example of projects such as IVoRy и TVORI.

"The Russian innovation market is still too small, it makes up only a small percentage of the global market, and for most of our developers, it doesn’t make sense to concentrate only on Russia. So we try to either teach them the basics of promoting their products in Western markets or arrange meetings like these so that aspiring entrepreneurs might be able to hear comments about their product from someone who is living on the other side of the world, and find out what people would choose and what customers are looking for and notice. For us it is important that Russian startups as often as possible have an opportunity to analyze the international market and to get feedback from potential customers and partners. These days we must think globally," says the Head of Marketing Department, at ITMO University, Ekaterina Egoshina. According to Todd Wiebusch, CEO at CHMG Capital, LLC, one of the participants of the seminar, meeting students from different countries helps to give a fresh look at the economy.

“This is the first time I have been to Russia to see its innovation ecosystem and I was really impressed by the teams I’ve seen. The teams and ideas are good, and I’m impressed with what I’ve seen. It is very clear that Russia is very serious about building an entrepreneurial ecosystem, starting with Skolkovo in Moscow, and supporting initiatives of universities like ITMO University. You have the right ingredients,” explained Mr. Wiebusch.