Transport of the Future: A Foresight Session at the Anichkov Palace

The "Right Rudder!" festival on transport and traffic has just finished in Saint Petersburg. During the festival a foresight session has been conducted where schoolers and university students made forecasts for the development of the transport systems of the country. 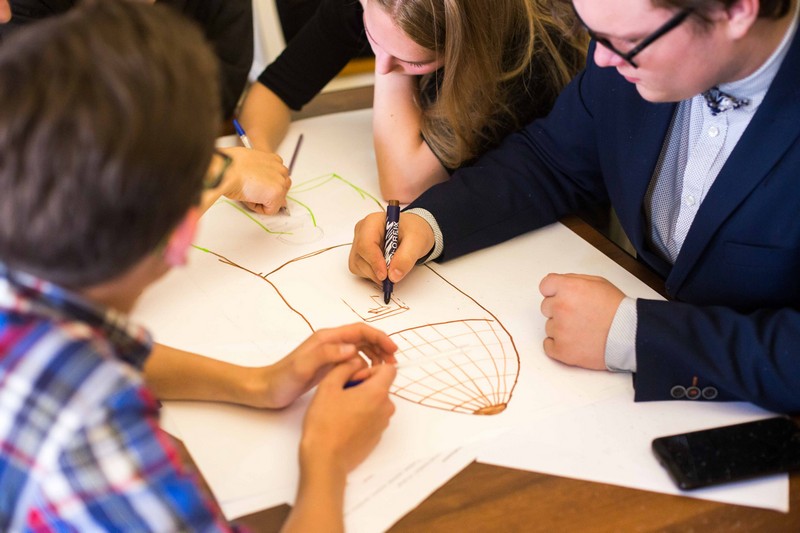 The nationwide festival started on September, 7th in Saint Petersburg. For 5 days, students from Russia's different regions took part in tours and master classes dedicated to transport. They were taught to navigate a ship, drive a train and fly a plane, they've visited a retro­bus exhibition at the Anichkov palace and the city's electric transport museum and also decorated the "Kind Bus" on route 27 with children's pictures.

One of the festivals most notable events was the foresight session "E­Transport and our Future": the participants had to think up ways to replace regular buses and trolleybuses and make a 2­ minute presentation on their ideas. Amongst the jury and the curators were representatives of ITMO University, Smolny and the city's Palace of Youth Creativity, as well as experts from Saint Petersburg Metro and state public institution "Organizer of Transport". The schoolers and the university students made their presentations separately, but, as Ms. Natalya Lukovnikova, the head of ITMO's Foresight Center notes, the schoolers presentations were in no way "childish". "Maybe schoolers get involved more easily and discuss their work more actively. During the foresight sessions with adults the limiting factor is always resources. Children understand this factor as well, but they place what they want to attain above all", ­ comments Ms Lukovnikova.

After discussing various hoverboards and spaceships from movies and books, the teams began working on their foresights for transport development. Some focused on technology to present projects like a rocket street car or hovering wheel­chair that needs no ramps. Others focused on where will modern tendencies lead us. For instance, one of the teams used statistics as a basis and derived that the future of transport is in the development of transportations as a service. "Car owners always have to look for free parking spaces, whereas public transport is always on the move. Personal vehicles stand idle most of the time, and the future is in using transport non-stop",­ explains Nikita Kozlov, student of the Anichkov Lyceum, ­ "when we need a haircut, we go to a hairdresser, but we seldom use professional services for getting somewhere. Our team believes that professional services can make the transport system effective and safe".

Another project of the Lyceum's students team was deemed best in the whole session: it was on creating a tube transfer system covering a whole neighborhood.

"We propose creating an experimental neighbourhood ­ on the outskirts of Saint Petersburg, for instance. All buildings are to be interconnected with a tbe transfer system for small packages: for example, if a child forgets his second pair of shoes at home, his mother can send them directly to his school. Also, this tubes can be used as delivery service for online shops. The financing is to be based on advance sales of the apartments, and if the system proves to be efficient the project can be brought onto city level", ­ explains Maxim Boitsov from the team. According to Ms Lukovnikova, these solutions can later become basis for future projects ­ for instance, at the Saint Petersburg State University of Civil Aviation. The guest experts can use these results as well. Children at the Anichkov Palace are planning to work on these ideas for about a year ­ to later present them at different contests and festivals.