Everything You Need to Know About Apple Pay

From 1 November, the top 10 Russian banks joined the Apple Pay payment system. Now, clients of Sberbank, VTB24, Tinkoff Bank, Otkritie Bank, Raiffeisen Bank, Yandex.Money and MTS can now pay for purchases online and offline using Apple devices. So far, MasterCard holders can make payments, while Visa holders will have to wait till December. Read more to find out how it works and just how safe it is. 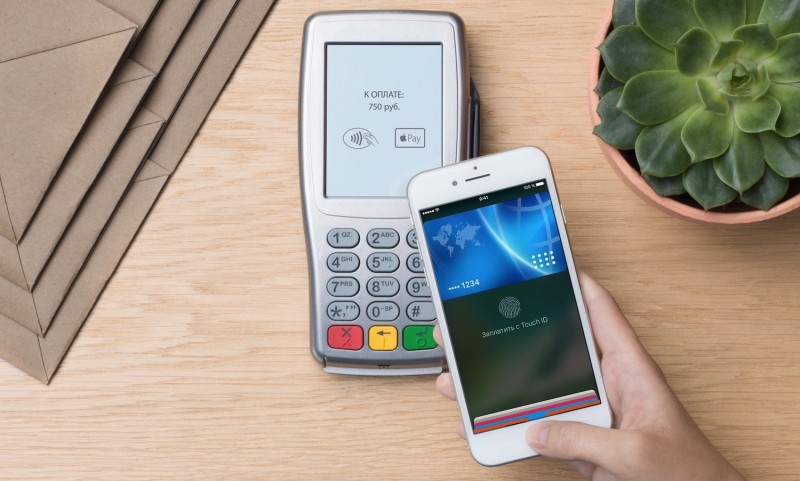 Let’s start with some important terms that are used to describe the technology that allows you to make purchases with your phone. Firstly, your device must have NFC which is a wireless short-range frequency communication technology. It has been around for over 10 years. The telephone also has to have an authorization system using the owner’s fingerprint. This is how the payment is confirmed. A POS-Terminal (point of sale terminal), is where you hold your phone or smart watch to pay, it needs to be PayPass or PayWave enabled. These two words are already familiar to those who have already stopped loading their card into a terminal and entering a pin but just tap their card on the screen. Then there’s the term Tokenisation which is what ensures security when making payments. When you make a purchase, Apple Pay uses a device-specific number and unique transaction code. So your card number is never stored on your device or Apple servers, and when you pay, your card numbers are never shared by Apple with merchants.

"When using Apple Pay, the details of your card are kept on a separate chip in your smartphone and are not accessible to anyone. Even if someone takes your phone apart, they still won’t be able to get to that data. If you restore the phone then you will need to put all the card data in the phone again. Of course, this isn’t some amazing banking innovation but it’s a lot safer than using your card. The telephone will help you, even if you forgot your phone at home" explains Roman Galimov, a senior analyst from the Department of Secure Information Technologies.

For those Russians using Apple, the dreams of many will come true with the launching of Apple Pay in Russia. As long as you have your phone charger, you can leave your card at home. Owners of iPhone 6/6+, 5s/5s+, SE, 7/7+, and Apple Watch are amongst those who can use Apple Pay. New Apple iPads will only work for online purchases in apps or on websites. The company insists that this is currently the safest and fastest way to pay for things. Of course, Samsung and Google also have similar payment systems. Samsung, for example, can pay on older terminals that don’t have PayPass and Paywave, and Google with Android Pay still hasn’t made it to the Russian market. If you’re worried about security, you’re probably worse off when you use your card, since people can easily copy down your card data and use it on the internet. With Apple Pay you just put the phone on the terminal and you put your finger on the Touch ID when paying. So even if your smart phone ends up in the wrong hands, they can’t take any money off your card. In the case of Apple Watch, whenever it is removed from your wrist, it locks and needs a four digit pin code to be accessed. When your watch is on your wrist, you just have to tap it over the terminal and it’s that easy to pay.

"From my experience, if the purchase is over 1,000 rubles, then you need to put in your pin number. If you’re just getting something small like chocolate, then you just need to tap your iPhone on the terminal and simply swipe your finger across the ID. However, I’ve had some awkward situations. I’ve been using the technology for about a month, since the time it came to Russia but I’ve already been stopped by security in stores when they saw I was putting my phone on the terminal instead of my card. Another time, one older lady who was working in a small store demanded that I pay for the goods, even though she had a receipt in her hands confirming the transaction. In general, not everyone is ready for this kind of technology", shares Mr. Galimov. According to the expert, Apple Pay has become so widespread due to Apple’s excellent public relations, and also their approach to security and its isolation techniques. Of course, phones have had NFC for a long time, but Apple has perfected the technology so that it’s more user friendly which also coincided with the introduction of contactless payment terminals.

There aren’t many disadvantages to Apple Pay but to name a few: not all stores have the necessary terminals. Furthermore, until December those with Visa cards won’t be able to use the service yet. Also there are people don’t know about contactless payments, and that can cause uncomfortable situations. Otherwise the technology is very useful, as confirmed by Roman Galimov. In order to save himself from an awkward situation, Mr. Galimov always takes at least one of his cards with him, not just his phone. He also uploaded Apple Pay cards for those banks which use this technology and paying he can just choose which account he wants to use. Comparing Apple Pay with Samsung and Android versions, Apple beats its competitors due to its secure system, the phone data and card data are kept separately. Even an advanced hacker would have trouble getting to the card data, and it might not even be worth the effort. Additionally, iOS is getting harder to jail break. Until now, there haven’t been any official stories of fraudulence connected with Apple Pay. With Android, there is a higher vulnerability towards hackers since the file system is much more open.

On the net, there are all kinds of reviews about how Apple Pay has made life easier for thieves. There are plenty of horror stories of how someone might grab you in a dark alley and force you to put your finger on the Touch ID and send all your money to someone else’s account, but these stories aren’t worth paying attention to. Mainly because this isn’t actually possible since Apple Pay doesn’t have the ability to transfer money from one account to another. It can only be used together with a POS-terminal.

"This is why you also can’t just take the phone and withdraw money from your account. In fact, it would be easier to steal the card itself and get money, because all the data you need to buy things online is on the card. If someone wants to steal money from your phone, they don’t need Apple Pay, they can hack your mobile banking client much more easily. Remember that without your fingerprint and pin number you can’t buy anything for more than 1,000 rubles using Apple Pay. Also with the help of iCloud, Apple Pay can be completely locked if you lock the smart phone through the cloud." concludes Roman Galimov.