Residents of ITMO Accelerator Are Working on the VR Superstar Project

Yana Artishcheva has been in the game industry for over 20 years, nine of which – in VR application development. In April 2020, her team became a resident of ITMO Accelerator. They work on a project for a virtual filming studio that would allow users to create quality videos without a group of actors and extras, equipment, and a filming set. Yana Artishcheva shared with us what VR Superstar is and for whom it is meant. 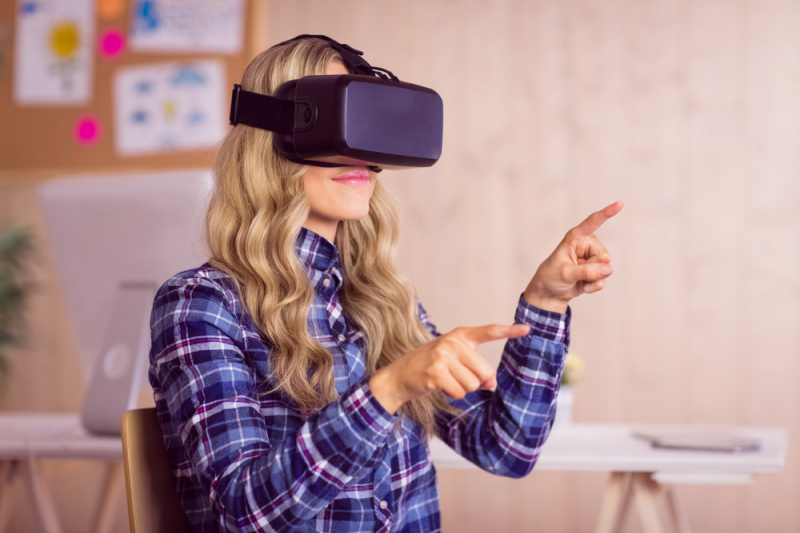 Yana, please tell us about how your product works?

Once you put on the VR headset, you appear on the filming set. Then you can choose a style (animation or photorealism), decorations, avatars for you and the actors, as well as set up the lights and the cameras. Basically, you can produce all the scenes of your movie without leaving the house. Even if you or a member of your team don’t have acting skills, the artificial intelligence component, which is implemented into the app and taught using examples of professional actors’ acting, will improve your body language and facial expressions. It will make them seem more natural.

As a result, you will get a complete film or a video. You can also choose the format: conventional (suitable for flat screens), 3D, or 360°.

You don’t even need a computer for filming. A VR headset called Oculus Quest – not an expensive one – will suffice. You can finish the rendering remotely, using our own capacities.

How promising is this field and VR in general?

Virtual reality is quite useful for creating animations, movies, and games. It allows us to save a lot of time spent on post-processing and other phases of movie production. The trend for  using VR in film production can be seen among major studios.

If VR technologies allow major companies to save money at no expense of quality, such solutions will be even more useful for smaller studios with less funding. The goal of our project is to make new technologies of animation more accessible for small studios, indie companies, and independent artists who are into movie making or game development. The appearance of such products means that there is already a demand.

Who is already involved in development of such solutions?

Major film companies have been using VR technologies for several years now. For example, Disney is actively developing and using VR tools. It can be observed in the latest version of The Lion King, or in the ongoing project Cardinal, which allows to turn a script into an animated VR scene.

There are smaller companies which also use VR technologies for content creation: Felix & Paul Studio, Baobab, Fable Studio, Penrose Studios and many others. There are also various VR filming and animation tools, such as Tvori, Flipside Studio, Mindshow. Mindshow was taken down from public access on Steam, as its creators have signed a contract with one of the major studios.

How did the idea come to your mind? Why did you decide to engage with VR technologies?

I’ve been into VR and AR applications development since 2012. I worked on the AR-Go project that won the Lenovo DoNetwork contest. In 2012-2014 I was working on the development of several apps for the AR glasses Moverio BT-100 and BT-200 as part of contract-based work for Epson. I created my first VR application for these glasses. Since then, I’ve moved on to VR development. I participated in development of such VR projects as CROC, Another World, Enter VR, Azur Games, and LogicEditor. The most interesting job for me probably was a virtual tour of Hermitage for CROC that I worked on last year.

The idea of this project occured in 2017, when I was studying management of gaming projects at the Higher School of Economics. In the beginning of the studies, we had to come up with a dream project and pitch it. This was the first time when I was designing a project without any financial or technical limits. The starting point for me was The Movies game, a simulator of a film studio by Peter Douglas Molyneux. We’ve spent a huge amount of time playing it with my daughter 15 years ago. The most fascinating feature for me was the opportunity to create machinimas.

At first, my project was supposed to be a simulator of an actor’s life. In virtual reality, players could become an actor or an actress, and progress from a beginner to a superstar. The game was supposed to end with a short film created by the user, who would act like a screenwriter, producer, and actor.

During the studies, I worked on improving this idea by discussing it with professors, and finally dropped the initial idea in order to switch to the project of the virtual filming set.

Who is on the team apart from you? Where did you look for specialists?

There are six people on our team, including me. I am the visionary and lead developer, Evgenii Borodov is a project manager, and Vyacheslav Utochkin is a consultant and producer. I met the latter when I was studying at the HSE. We also have a programmer, Ivan Klimov, a specialist in neural networks, Dmitrii Prokhorov, and a UI/UX designer, Alina Shlagina. I met her in a telegram chat about VR technologies.

Which phase of the project are you currently in?

Right now we are focusing on creating a minimum viable product (MVP). However, finalized elements of the project are already in use. For example, we arrange weekly meetings via our own app. It increases the efficiency and adds some fun.

We cooperate a lot with the developers of the VR game Owling Crowling Bowling. They use our software for creating videos about their game, for testing game physics, and for scene design enhancement.

Recently, we arranged an exhibition of paintings by Aleksandr Verstov in our app – in the decorations of a medieval castle from Owling Crowling Bowling. In July we are planning to arrange another VR exhibition of the works by a famous Russian photographer.

Why did you decide to join ITMO Accelerator? How does it benefit your project?

First and foremost, we wanted to consult the Accelerator in order to receive an expert evaluation of our project and help on product marketing. Maybe we will also find investors, or, even better, we’ll be able to cope without them.

Working with ITMO Accelerator stimulates us, as they require weekly reports, so there are always strict deadlines.

What are your current plans?

In the coming months we want to finish working on the MVP and release a solution for a specific target audience (TikTok), as well as arrange sales of minor solutions based on our product. In the long run, we want our team to work full time on the project.