St. Petersburg had an open-air Geek picnic over the weekend for science and technology. Over a few days, Elagin island built an entire city of the future where visitors could try the latest innovations and technologies. All over the picnic, visitors could charge their brains with the latest information from the fields of science, technology and arts at various lectures and could also feel with their own hands the latest technology at the ITMO University zone, one of the organizing partners of the event. 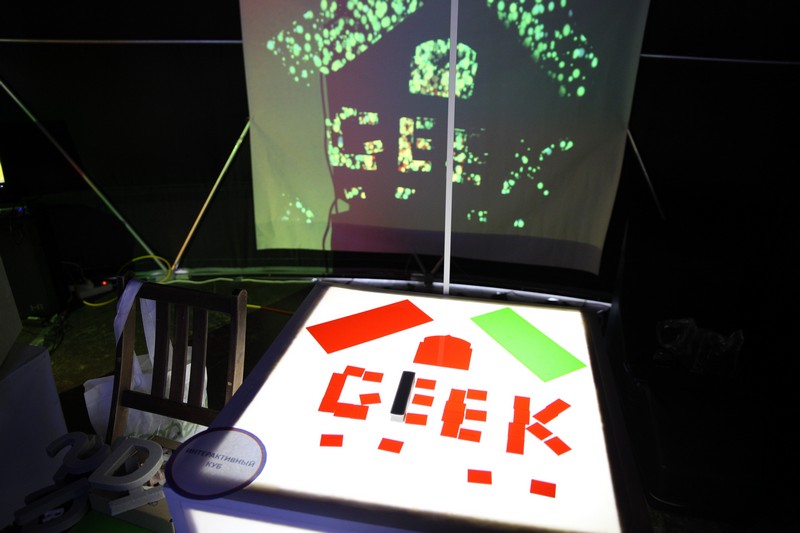 The ITMO University zone gave visitors a more practical taste of science and technology. Student Scientific Laboratory of Optical Engineering and Olimp Union (ITMO open lab) brought an optical maze to the festival, in which one must guide a laser beam from start to finish. They also offered their own adaptation of the popular game lasertag. At the ITMO zone you could also  “play” with the high-voltage arc, or light up a gas discharge bulb, without wires, by just holding it in your hands. Most likely, none of the visual arts could possibly exist without the existence of light. ITMO University’s Creative Light Design School and Museum of Optics celebrated “Eternal Light” in the Lux Aeterna tent. In the tent, one could become a 21st century actor of the shadow theater, any object on the interactive cube is displayed on the screen in an iridescent color. Spherical mirrors created a very realistic mirage which people attempted to touch. A white polygonal bear, was available for people to illuminate its various sides with the colour of their choice. This was done with the help of two projectors which could project different patterns on the paper animal. One of the walls in the tent was coated with a special phosphor film which absorbs the light falling on it and shines on its own, so you can draw on this wall using a regular flash light or for example, the light from a cell phone. The only problem is, it doesn’t last forever, so if you want to keep your design as a souvenir, there is a 3D pen in the ITMO University Fablab tent which you can use to draw something as large as the Eiffel Tower. A small sandbox was also set up with kinetic sand, for the young sculptors. Due to a special binder component, it can be molded and retain its shape like wet snow, but it falls apart again when it’s let go. The kinetic sand was popular amongst young and old alike. ITMO University’s young scientists prepared a nitrogen and chemical show for the viewers. They demonstrated lots of really cool experiments like how objects can levitate and smash oranges and kiwis into pieces. Saturday was a hot day, so visitors enjoyed innovative ice-cream from the Institute of Refrigeration and Biotechnology at ITMO University. This is no ordinary ice-cream, it is prepared before your eyes using liquid nitrogen which has a temperature below -175 degrees Celsius. Due to the very large difference in temperature with the remaining ingredients large ice crystals simply do not have time to form, therefore, cryogenic ice cream has a very delicate homogeneous structure, and the natural ingredients – milk, syrup and fruits – provide a delicious taste. Visitors had a chance to try FOYT cocktails, a “just add water” replacement for breakfast or lunch. These cocktails provide all the necessary amount of proteins, fats, carbohydrates, vitamins and minerals. A standard serving contains 390 calories, and this energy will be useful to those who are going to buy anything in ITMO.STORE. The store offers customers a discount equal to the number of pull-ups one can do, and the biggest discount achieved on Saturday was 33%.