Unreal Fest – St. Petersburg's first large-scale event dedicated to VR and AR technologies - took place last weekend. The festival gathered both consumers who had the chance to test new technologies, and representatives of the young but fast-developing virtual reality and augmented reality market. The field's experts made presentations and lectures for businessmen and startupers. Research results were also presented at the show: for instance, the team of the Cyber Suit project brought its neurointerface costume which imitates real tactile sensations, and developers from the eScience Research Institute gave the guests an opportunity to virtually visit an Indian temple during a massive festival. 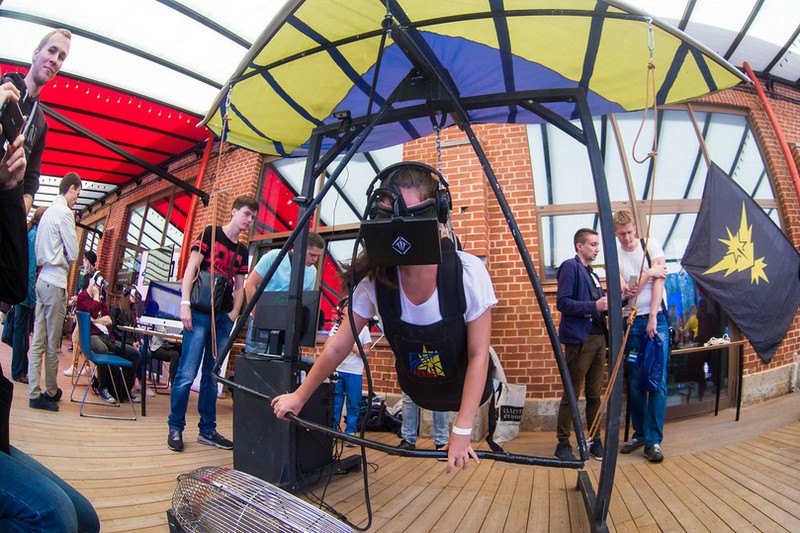 The festival included business, entertainment and educational programs, as well as a technology exhibition and a children's zone. Experts such as Dmitry Statovsky, founder of the 1Reality VR service, Ekaterina Filatova, head of Russia's first Association of Augmented and Virtual Reality, Igor Melnikov, co-founder of the company that produces VR-goggles VR Boxglass, and others were among the speakers for the event. The guests could also watch drone races, try different VR products and enjoy unconventional foods. ITMO's venue was one of the most popular ones. There were whole lines of guests who wanted to try drawing with 3D-pens, watch videos made by the Video360Production team and play with robots. Young scientists from the eScience Research Institute also presented their know-how. Their invention that is dedicated to research of crowd behavior is based on a multi-agent model that has been improved with data gathered by researchers in India during the Kumbh Mela festival and during the VK fest in Russia. The model includes classification of people by age, social standing and other indexes. This can be a great aid in education, for example, for volunteers: they can be shown particular scenarios of the mob behavior that they'll have to adjust to, - one can not only watch, but also control the VR process using the technique. "The essence of our demo is that using VR, people get into an existing Indian temple where we did our research during the Kumbh Mela festival. During the festival, the flow of people ranges between 50 to 100 million. Using VR-goggles, one can get into the temple, explore the territory and navigate the flows of people, and the other can play the role of a crowd-manager: monitor the whole picture and give out recommendations. Thus, a person who’s using VR can see notes that appear on the virtual territory and complete different tasks", - explained Andrei Karsakov, head of the scientific visualization group at ITMO's eScience Research Institute.

A costume out of science fiction

The young scientists from Moscow presented a neurointerface costume that allows for scanning and recreating movements and sensations. It interacts with muscles and skin receptors, and recreates certain movements. "The idea came to me during my rehabilitation - I was practicing music and accidentally cut a nerve, so I could no longer move my right hand. I was studying to become a biologist and was designing medical equipment with a team of engineers. We created a prototype that scanned someone’s movements and recreated them onto me. In this way, I learned how to play the double bass in 21 days. We've developed the project further using VR technologies, and created an entire costume that can not only recreate movements but also tactile sensations - heat, cold, touch", - shares Olga Levitskaya, the company's CEO.

According to Olga, the technology is based on a method of affecting nerves with neural impulses. There are lots of contacts on the costume, and its fabric plays the role of a transmitter that transfers impulses to the nerves via a system of flexible cards. The scientists had to create the costume by themselves, using professional help: formerly, such tasks were only done in the space industry, to create costumes that slow the atrophy processes in astronaut’s muscles in zero-gravity conditions. The developers note that their project should not be confused with Tesla Suit, as its much more sophisticated. Currently, around 30 people from all over the world work on the project.

AR for schools and life-hacks Arman Atoyan, the co-founder of the Arloopa company advised VR specialists to develop products for the educational field: according to him, it has a lot to offer from the business point of view. Thus, a music book about dinosaurs inspired the idea of a new product. The businessmen decided to improve it with modern technology: after one caught the dinosaur’s picture with a phone camera, a realistic dinosaur showed up on the screen, moving around and making noises. The developers also liked visualizing laws of physics and astronomic phenomena. For instance, using the same phone camera and a special app you can make a picture explaining a sun eclipse, making it much more understandable than a usual illustration. Valeria Kholodkova from the EligoVision company shared how AR can be implemented in education. According to her, most entrepreneurs are still afraid to invest their technologies into such a traditional and complex field, yet, she and her colleagues decided to try. As a result, the company succeeded in implementing an AR constructor in several schools. The developers note that it's a very simple constructor that can be easily used by anyone who can turn a PC on; texts, slides, videos, images - all the things a modern teacher uses can be uploaded there.  The schools are also offered ready-to-use products that are already uploaded into the constructor - one can use them as they are or modernize them. For instance, during one of the related projects a high schooler who became interested in the novelty created a model of a medieval city after 3 months of work in 3D-Max. Such subjects as math, biology, geography, chemistry and physics will become much easier with the help of AR, and teachers will be always there to support the students.

"School directors are not always interested in such offers as ours - we entered schools with the help of students and teachers. Children who are really interested in everything new are the evangelists of technology. You should have seen their eyes when they start working with the constructor. They have lots of ideas, and they always try to bring them to life", - comments the representative of EligoVision company. The speaker also shared advice that will be useful to those who are set on implementing their novelties. According to her, the most important thing is to not be afraid to offer the technology to the target group, never mind the stereotypes. The second advice is that one has to be patient: few projects have a huge success at the very beginning, but believing in your product can work out in the end. The third life-hack is that you have to spend as much time as you can with your client. You have to explain the technology in detail, answer any and all questions, adjust your inventions for their purposes - and then you'll surely succeed.