Andrey Breslav, an ITMO graduate, the creator of the Kotlin programming language, and co-founder of the Alter service that helps find a mental health professional that suits you, gave an open lecture as part of the Mental Health Month. He spoke of his personal path to psychotherapy, his work on Alter, the promotion of psychology, and struggling against social stigmas. 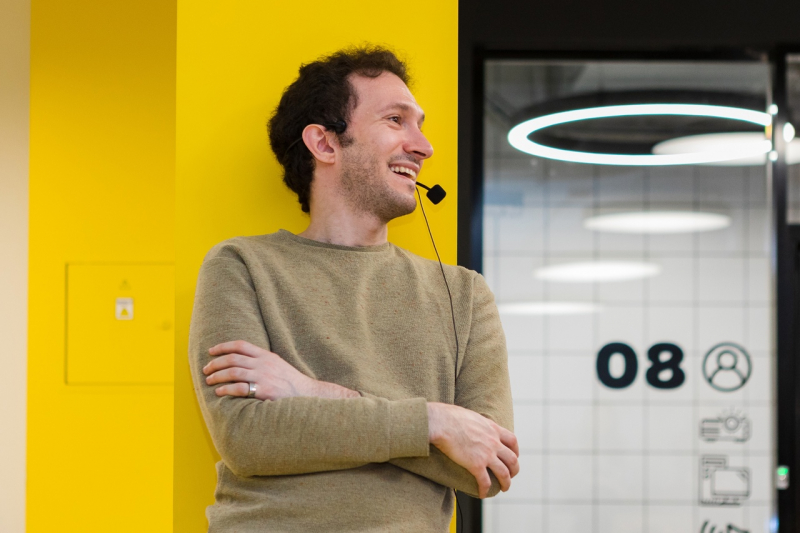 Psychotherapy as an element of self-improvement

According to Andrey Breslav, his path to psychotherapy started with postponement: it took several years for him to finally approach a counsellor with issues he’d been dealing with for some time. The initial stimulus was a new relationship and the associated problems that suspiciously reminded him of previous ones. Quite soon, it became apparent that it wasn't the relationship but his personal problems that he had to work on: anxiety, high expectations for himself, and so on. This way, Andrey began to see psychotherapy as not just an instrument for solving specific problems but rather an essential element of self-improvement – and this had a great effect on his attitude towards the whole thing.

We all possess two types of intelligence: verbal (logic and speech) and intuitive. Intuition is just a vast neural network that learns from our early childhood, and we don’t even notice based on what it’s basically learning from. Therefore, the reactions that this neural network generates are not always logical and often contradict our principles or values. They are just the product of patterns that we’ve accumulated for years – and you can influence them using verbal intelligence which you can control.

On the whole, there are currently about 600 various methods, schools and approaches. Among them, one can single out four major areas, depending on the subject matter and the needs of the client.

By all means, one doesn’t necessarily need to understand what these areas are exactly about to choose a specialist that suits them. But if you want to have a better understanding of them, there’s a special guide on psychology branches, as well as an introductory course on the Stepik platform (in Russian).

Andrey Breslav says that they developed the Alter service out of necessity. Several years ago, when psychotherapy wasn’t popular and people were often ashamed to admit that they were getting counselling, the only way to find a specialist was by word of mouth. But as a matter of fact, close relatives, friends and partners shouldn’t really be getting counselling from the same specialist, as this leads to a conflict of interest. What’s more, people who don't have a keen knowledge of psychotherapy can’t say for sure whether a specialist is good, or how good they are.

Alter offers a different approach – it searches for specialists based on scientific algorithms and expert selection. The service was created in 2017 – then, Andrey Breslav still managed a large team at JetBrains, so he worked on Alter in his free time. He says that he wrote the code in fits and starts, often when travelling by train or plane.

The new service’s key goal was to make effective and safe therapy accessible to everyone. For this purpose, its founders, Andrey Breslav and psychologist Olga Kitaina, decided to put their stake on a strict selection of specialists in accordance with a methodology developed by scientists from the Psychological Institute of the Russian Academy of Sciences. The counsellors are tested on their knowledge of the structure of psyche, empathic listening skills, personal motivation, and so on. The testing is conducted by specialists of the aforementioned institution.

Another important aspect is supervision, i.e. a counsellor has to consult their colleagues and discuss clients’ cases (with regard to their privacy). It is of no less importance for them to get counselling themselves – this excludes the possibility of projecting their own problems on their interactions with a client.

As of now, Alter has a database of over 500 psychologists who deliver over 8,000 sessions on a monthly basis. The number of people who Alter helped find a specialist since 2017 has exceeded 17,000.

How to choose a psychotherapist

In conclusion, Andrey Breslav spoke of a few misconceptions that are often associated with choosing a specialist, namely the wrong criteria people use: many of them seem important, but in reality, have nothing to do with the quality of a service.

The first is whether a specialist has or doesn’t have medical education. It’s believed that a person with a diploma in psychiatry is better. Actually, there’s no scientific data substantiating this notion, but there’s an observation that’s at the very least relevant for Russia. In our country, doctors are taught to work with patients, i.e. see them as “unhealthy”, and make them “healthy”. Psychotherapists, on the other hand, don’t work with patients but with clients, and that’s a huge difference. In modern non-medical psychotherapy, one of the key approaches has to do with unbiased perception of the client. In this case, there are no “healthy” or “unhealthy” clients – even if a person has a diagnosis, the therapist’s position still remains unbiased. Therefore, a person with a medical education will have to change their attitude – and that can be an issue.

Another widespread misconception has to do with clients’ intention to find a specialist who’s had a similar life experience. In truth, an attempt to find one’s “double” as a counsellor is doomed to fail. First of all, all people are different, and even similar experiences don’t make them the same. Secondly, there’s a risk that the specialist hasn’t resolved their own issues, so the sessions can become a trigger for them. Lastly, all therapists are taught empathy, so they will understand you not because they’ve experienced something similar, but because they’ve learned to understand you and see into what you talk about.

One more important criterion that’s important for many clients is age and gender. It’s worth mentioning that for the counselling to be successful, the client has to trust their therapist. So if you find it easier to trust a person of your gender or the opposite one, older or younger – choose such a person. There’s no data stating that specialists of specific gender or age work better; it’s comfort that’s important here.

The issue with work experience is even more amusing: scientific data states that if it’s more than two years, there’s no difference. Meaning a psychotherapist with two years of experience is on par with one who has ten. What’s more, psychotherapy is a constantly developing field, so if a specialist got his education quite a long time ago and didn’t receive further training, they are probably falling behind. So it’s important to pay attention to how much time passed since a specialist studied rather than their work experience.

It’s also worth mentioning that the cost of a session doesn’t correlate with its quality in any way. In Russia, at the very least, specialists come up with prices on their own, and a high price only speaks of a counsellor’s high self-esteem and a desire to take new clients.