One more regular session of ITMO university International Camp has ended at the «Yagodnoe», educational, sports and recreational center. Students from Russia, Spain, France, Poland, Czech Republic, Italy, Slovakia, Taiwan, Belarus and Serbia spent two weeks learning waste recycling, cleaning the territory around the local lake, listening to lectures on food-sharing and recultivation of pits, and even found an unauthorized disposal field on the wildlife reserve's territory. The participants also developed several eco-projects as well as worked on alternative sources of energy. 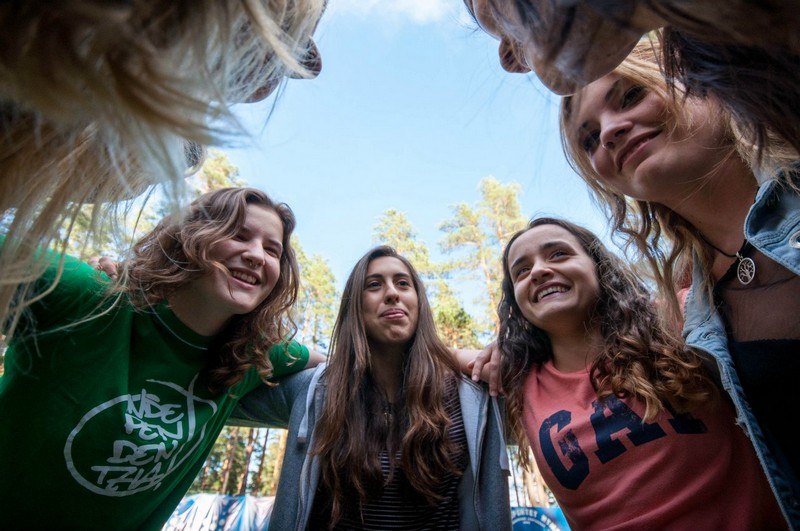 According to the camp's coordinator and manager for ITMO University Center of Social Design and Entrepreneurship Alyona Stepanisheva, the two weeks at the camp were split into three modules: one dedicated to education, one to sports and culture, and the recreational one. All the interactions between students — from cleaning up to preparing national food — were in English. The first to arrive at the camp were the French students — those were greeted Russian-style, with salt and bread. Then, students from 8 more countries joined the camp as well. All in all, 28 foreigners participated in the program.

«At the beginning of the program we conducted an ecological game during which our students learned about separating waste. Just before that we found a huge unauthorized disposal field on the territory of the local wildlife reserve. We had to write to the Environmental Inspection Committee to make them utilize it», — comments Alyona. Yet, the large dump played a positive role in the camp's work. The coordinators proposed finding unusual artifacts in the waste. In the end, the international guests gathered a whole car's basic frame from what they found. Another find was some sort of a traveler's suitcase full of different things that can prove useful on the road. The participants could not possibly clean out the whole dump, so they turned their attention to the territory around the lake. The campsites left by tourists were a sorry sight: there were pits full of different plastic and glass garbage. The participants cleaned the pits, then filled them with sand and planted raspberry bushes there.

«All in all, we've gathered more than 300 sacks of garbage, including 200 bags with sorted waste. Transporting them was no easy task — sometimes we had to move them from one side of the lake to the other, no matter the weather. All the waste we gathered was loaded into a car and sent to our partners — „Waste is no longer“ organization, has already spread it between different recycling facilities», — notes Alyona Stepanisheva.

Almost every day the participants attended lectures by the staff of Center of Social Design and Entrepreneurship and other invited specialists. Thus, a representative of «Food sharing in Saint Petersburg» told them about this movement, which allows to save and use the products which are commonly thrown out by restaurants and cafes every evening. Another speaker gave a lecture on recultivation of pits, which is a pressing concern for the Leningradsky Region, as pits left after sand and slate extraction usually turn into dumps and affect the ecosystem. A proper recultivation is a natural process that takes several years: firstly, they plant grass along the pit's borders, then, after some time, bushes and trees. This restores the soil and improves the ecology. Apart from that, the participants presented 5 ecological projects. Each team consisted of 6 people, two of them were Russian coordinators. The first team's project was inspired by the above-mentioned dump — it was a device for collecting rain water, created using materials gathered there. The water was used for everyday necessities.

Students from the second team made artificial manure from food residues left by the camp's diner. The mold they got can be used as a fertilizer, or to re-cultivate pits.

«The students made an arrangement with the cafeteria so that its workers would separate food left-overs. As a result, the cafeteria’s workers started to pay more attention to preparing and distributing food, as to create less waste», — explained Alyona Stepanisheva.

The third team worked on alternative sources of energy. Their activity was presented as a quest game. For instance, they developed a windmill prototype based on a regular plastic bottle. On one of the stages of their project they powered up LEDs using batteries made of potatoes and apples. This project was considered the best.

The fourth team worked with separated waste collection bins. They also made informational banners for promoting an ecological approach to waste. The fifth team used waste to build flowerbeds and presented them to their colleagues. «Two or three times we've had evenings dedicated to Russian folk craft. After one of those the participants got themselves their own hand-made ecologic rag bags. They also tried coloring matreshka's, using their own ideas of how they should look. We also had a dancing party: surprisingly, our participants liked Russian national dances with their stomping, „khorovods“ and „runlets“ the most. The Spaniards danced „Macarena“», — shares Alyona Stepanisheva.

Among other events, the participants organized an evening dedicated to national cuisine. Chocolate brownie, authentic carbonara, cakes, pierogi’s, roast potatoes and herring, sandwiches and snacks. The foods were not the only cross-cultural experience: the participants went on several trips to Saint Petersburg to see its main cultural sights.

«This was an incredible experience. I met new people from different countries and made new friends. I really liked studying Russian culture and culture of other countries. And I'm really grateful to the organizer's team, who brought it all to life», — shared Segurola Ortis Leire, a student from the University of the Basque Country.