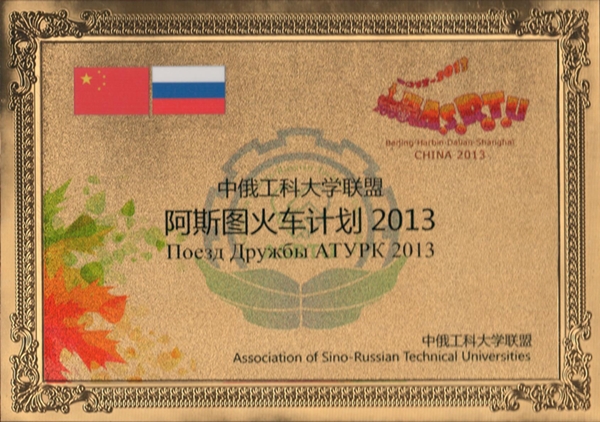 Association of technical universities of Russia and China (ATURC) was established in 2011 as part of the integration process between the two countries. The main objectives of the association were: the improvement of the quality of education and the exchange of experience between the students of the leading technical universities. Different conferences, seminars and scientific competitions are held regularly by the ATURC.

The feature of the organization is not only the exchange of experience and demonstration of technical achievements. Students also get acquainted with the culture and customs of the countries involved. «The Train of Friendship ATURC» was created for this purpose.  Last year, the first similar train travelled from China to Russia. The delegation of forty students and ten teachers from various universities of China drove along the route: Moscow — Samara — Moscow — St. Petersburg. At each stop travelers learned something new about our country. In St. Petersburg, the students went sightseeing and visited our University. The main event of the visit was a grand concert organized by Chinese students, which was attended also by students of the NRU ITMO.

The success of the first journey of «The Train of Friendship» forced the organizers to continue the development of this project. This time, the Russian students had a reciprocal trip to China. In October, a delegation of Russian creative students went on a journey. The NRU ITMO was presented by Ruslan Olszewski, Christina Khafizova , Nicolai Grazhdanov, Anastasia Dubinovskaya and Jaroslav Davydchik.

The delegation also consisted of representatives of the Bauman University, the Gubkin Russian State University of Oil and Gas, Moscow Aviation Institute, the Moscow State Automobile and Road Technical University, Samara State Aerospace University  and many other technical universities in the country.

In addition to introducing students to traditions of China, our delegation has also prepared a creative feature colorful Russian flavor. Students of the NRU ITMO introduced a part from the medley of Russian folk and classical songs to the accompaniment of violin and piano and a sand show. In each city, our students visited Chinese universities. They attended different tours, lectures and other activities purposed on sharing the results of scientific work. On his way friendship train made ​​stops at universities in Beijing, Shanghai, Harbin and Dalian.

All project participants gained new knowledge. The international cooperation between the technical universities is becoming a reality. And «The Train of Friendship ATURC» proud to pave the way for future joint Russian-Chinese studies.