"The days of diffraction" and the ITMO University

May, 26-10, 2014 the annual international conference "Days of diffraction" was held in St. Petersburg. The conference brought together more than 200 mathematicians and physicists from across the world, they specialize in diffraction theory, wave phenomena and related fields. 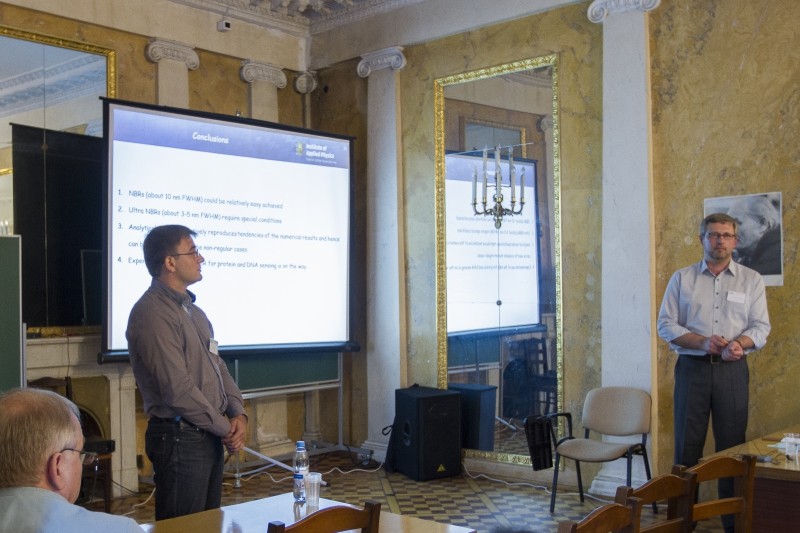 May, 26-10, 2014 the annual international conference "Days of diffraction" was held in St. Petersburg. The conference brought together more than 200 mathematicians and physicists from across the world, they specialize in diffraction theory, wave phenomena and related fields.

The conference was organized by the ITMO University jointly with the St. Petersburg Department of Steklov Institute of Mathematics of Russian Academy of Sciences, the Physical Faculty of Saint Petersburg State University and the Euler International Mathematical Institute with the support of the Russian Academy of Sciences, the Russian Foundation for Basic Researchand the St. Petersburg representative office of the Institute of Electrical and Electronics Engineers (IEEE).

Duringfive days the participants acquainted with more than 150 reports on the theory of diffraction, mathematical aspects of wave propagation theory of nonlinear waves, electromagnetism, elastic waves and seismology, dissemination of sound and vibration, and electromagnetic processes in nano- and metamaterials.

World-known scientists were invited at the conference. Among them are Alexei Maradudin, Professor of physics at the University of California, Irvine (USA), who delivered a report on the numerical study of light scattering and its passage through the two-dimensional randomly rough surfaces and Nikolai Rozanov, head of the Department of Laser Optics of the ITMO University, who presented the report "Solitons in the dynamic pool". Vasily Babich, Professor of Mathematics and Mechanics Faculty of the St. Petersburg State University, Chairman of the section on asymptotic methods, presented a report about isomonodromic deformations fuchsian systems and symplectically geometry of the space of matrices; Ivan Andronov, Professor of the Department of Computational Physicsof the St. Petersburg State University, told about the diffraction problem on systems cylinder with a strongly elongated cross-section.

The ITMO University took an active part in the conference. Special section on physics of metamaterials for the ninth time took place at the initiative and under the direction of Pavel Belov, head of the International Research Centre for Nanophotonics and Metamaterials of the ITMO University. Development and application of metamaterials is the main theme of the section. This is one of the most perspective directions in the scope of modern optics and photonics with high potential and wide opportunities for practical application. The section was held in the format of the workshop: after the performance, the audience could ask questions to the rapporteur and discuss actively the topics covered in the report. Pavel Belov believes that this form of conducting scientific session is the most productive.

This year the reports of the section on physics of metamaterials have been mainly devoted to the structures based on graphene and research forces at the nanoscale. Among the speakers there were the researchers with a world name: Javier Garcia de Abajo, (the Institute of Photonic Sciences (ICFO), Spain), Jofroi Larose (Institut Langevin, France), Yuri Kivshar (Australian National University) and others.

The speech of Alexander Poddubny, the scientific employee of the Department of Photonics and Optical Information Technology of the ITMO University, was held during the session. He presented the report on the topical theme of topological conditions on the borders of photonic nanostructures, stable to changes in the external actions. It causedgreat interest among the scientific community.