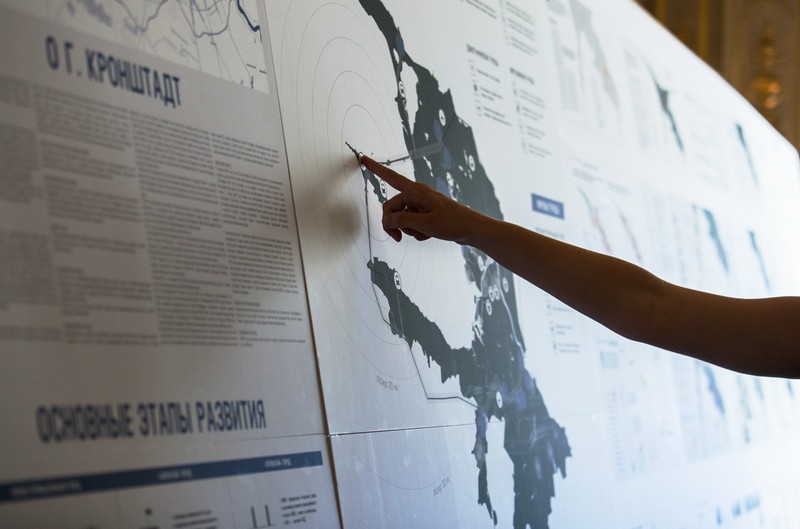 The project "Kronstadt 2040 vision" was launched during the implementation of the master's program of the ITMO University "Design of urban ecosystems." During the year, from September to August 2013 2014, mentors and students studied the specifics of the urban environment of Kronstadt and produced different scenarios of the development.

Vladimir Vasilyev, the rector of the ITMO University, said: "Reorganization of Kronstadt is a long process and although the material realization of the project hasn't started, in September 2013 work has changed the social environment in Kronstadt. In discussions on the development of urban space residents and local businesses were included. The University attracted young and talented specialists with creative thinking, forced to take a new look at the existing situation in the city".

With the aim of understanding the regional characteristics, interests and needs of local residents, the project team has carried out a large amount of work «in the field». The obtained results were analyzed in the framework of foresight sessions: "We have created a number of images that can complement each other, and four optimistic scenario of the development of the city",  Natalia lukovnikova, the head of the Center of Scientific andtechnological foresight of the ITMOUniversity, said. "The first scenario: Kronstadt becomes a beach area and a recreation area for residents of St. Petersburg. The second involves the rapid development of University campuses. Another option provides for the active development of the port, but this is a more vicious way of industrialization of the city. The international scenario is also possible: Kronstadt starts cooperating with the cities of the Baltic region. The fifth scenario we called "Detroit", this is a crisis variant of development of the city. We left this scenario because the managers and citizens need to understand what will happen to Kronstadt, if nothing is done”.

The authors of the project have created a road map that shows how particular idea of transformation of the urban environment can lead to implementation of one or another scenario of Kronstadt. After discussing the ways of development, the preparatory stage of work begin. It should bring the city to an ideal image. Within this phase, the administration can facilitate the implementation of small-scale initiatives, for example, cleaning the city beach or the creation of a summer's archeological school.

The head of the administration of Kronstadt Terenty Meshcheryakov said at a press conference that he will leave the post of the head of the district soon and he noted the progressiveness and ambitiousness of the project of reorganization of Kronstadt. "The ITMO University is a leading Russian University, and it is very important that we are able to use their knowledge and potential," Terenty Meshcheryakov said, adding that the project will continue to evolve also without his direct participation.

According to Anatoly Kotov, the Chairman of the Committee on economic policy and strategic planning in St. Petersburg, the project managed to collect a lot of useful data, but in the nearest future it is necessary to outline concrete actions. "For over three centuries Kronstadt performed the defensive functions. When it was not necessary anymore, the state has not offered any alternative", Kotov said. "The team of the ITMO University has identified key directions of transformation of the city. Now you should start a more specific discussion, including the budget, because we must take into account the real circumstances".

The Chairman of the Committee on tourism of St Petersburg Inna Shalyto noted the necessity of the cooperation between the authorities and the academic community: "It is important toincrease the role of universities in such projects. Now we are seeing a statement of certain facts and in future I would like to see the answer to the question: what to do?"

According to the Director of the program "Design of urban ecosystems" Michael Klimovsky, the one of the main tasks of the project is the creation of a viable scenarios of the development of Kronstadt, they should interest the administration and they should serve as the basis for decisions of the city authorities on the strategy of city development.

"Now we are negotiating with Anatoly Kotov concerning the optimization of the strategy of social and economic development of St. Petersburg until 2030'', Klimovsky said. "In this strategy, Kronstadt is given little attention. By our project we want to show that each district may submit their own development plan taking into account the desires and needs of its inhabitants".

The next stage of realization of the project "Kronstadt 2040 vision" presupposes active involvement of students of the "Urban Transformation School" of the ITMO University (UTS), which plans to work in three directions next year - "Design of urban ecosystems" (master program was opened last year), "Technological entrepreneurship (open from 2010) and "Municipal Informatics".

Each of the three directions has its own specific character and is focused on practical activities of graduates. The program "Technological entrepreneurship" focuses on issues of business organization and development of investment projects. The second program, "Design of urban ecosystems", is dedicated to the global planning and reorganization of the territories. "Municipal Informatics" is purely application program duration one year, implemented in partnership with Thomson Reuters and JetBrains. In UTS the Open Studio alsocontinues to work, therethe project "Kronshtadt vision" wasdeveloped. Curatorsexplain thatsuch association of educational programs was motivated by the new requests of students and graduates aimed at the creation of urban projects.

"We have combined two two-year master's and one one-year programs  because they are all aimed at the development of the city", the head of the program "Technological enterprise" Marina Sukhorukova explains. “Talking with applicants, we were convinced, that we have correctly guessed the trend: people come to us with interesting ideas and creative thinking that want not onlyto create Start-Ups, but also to change for the better the urban space. Incubator QD becomesnot a business incubator, but experimental platform, on the basis ofwhich thepromising projects are carried out".

At the beginning of their studies the students must choose one of four studios under the guidance of the Western experts: Jamel Klush, Peter Lawrence, Stanislava Boskovic and Jose Acebillo, Edward Moro and Markus Appenzeller. The program is constructed by a modular principle: theoretical intensive, workshop, design trip in partner countries with the study of specific projects of transformation of urban areas, independent work - and again the repetition of intensive.

Michael Klimovsky said that five fundamental principles of modern educationare implemented in the"Urban Transformation School": "The first is the practice-oriented training. We give the design decisionof a specific task, which can be formulated by business or city. The second principleis transdisciplinarity, i.e. develop solutions that lie at the intersection of different disciplines. The third is joint planning: at each stage we engage the ultimate consumer of the product in the work. The fourth principle: for us engineering processes is more important for us than the form. And the fifth principle: network interaction, which became possible thanks to the ITMO University, one of the leaders in the scope of international cooperation".

The work of the "Urban Transformation School" is only the first step on the way of reorganization of Russian higher education. The presentation took place in St. Petersburg House of architect, once again demonstrated the importance of interaction between local authorities, the academic community and business representatives in issues of transformation and improvement of the urban environment.