During the week of March 12, the world champions in programming Niyaz Nigmatullin, a student 6th year student in the department of Computer Technologies of ITMO University and Maxim Buzdalov, an assistant of the same department, will hold preparatory training for the world cup championship on programming final (ACM ICPC) for Beijing University students. 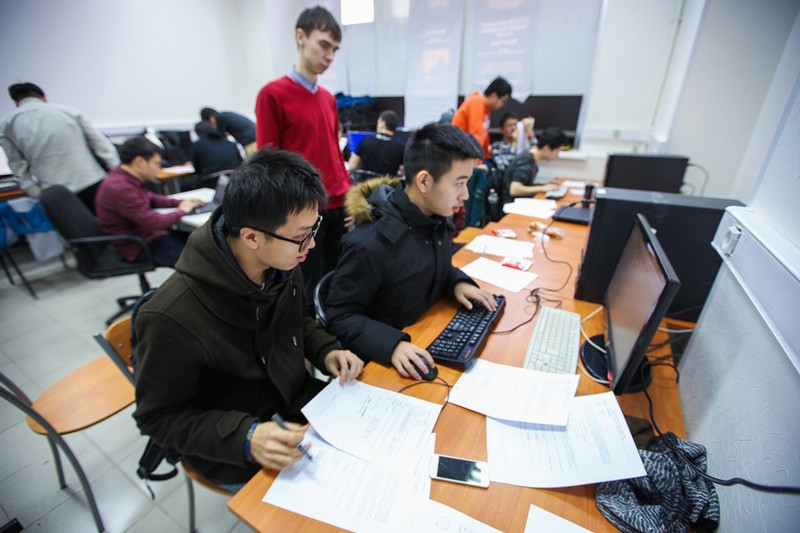 The terms of training sessions are close to the real competition: the teams have five hours to solve about 10 tasks.The tasks that have already been presented in the semi-finals and finals of the competition over the years are most often used for training.


Each task has a certain "legend" from which the guys should catch the mathematical essence. Their aim is to write the code for a program that will do what is required by the task. After self-testing of the finished program, the participants send it to an automatic system which brings the final result: it checks whether the code is written properly and the task is done," Niyaz Nigmatullin comments.


According to Niyaz, despite the fact that it has only been a few days from the beginning of the training camp, the foreign guests are already showing good results, and some of the four teams who came to St. Petersburg from China are ready to take part in the world cup championship on programming final ACM ICPC, which will be held in May this year in Morocco.


"Our guests are really interested in training. The participation and winning in the championship for them is a good way to express themselves, because in China there is a lot of good specialists and a high competition between them, which is also a part of their motivation," the coach of the Chinese national team shares his opinion.


Peking University students, as a part of a partnership agreement between the universities, come to train to ITMO University for the second time.A year ago, one of the teams, that visited St. Petersburg, won the third prize in the final of the international competition.
The delegation from our University visited ITMO University for the first time two years ago with the result that we signed a cooperation agreement. Then there were first trainings in Russia and our team's reaching the ACM ICPC championship prizes. This only confirms the quality of the programming school, which has developed in ITMO University. No wonder it is the students of your university who became the five-time champions of the competition," Guojie Luo says, the Peking University team coach.


ITMO University champions are popular not only among the Chinese students. In October last year under the leadership of Niyaz Nigmatullin and Vladimir Ulyantsev, the graduate student of the department of computer technologies, programming competitions organizer, the training sessions for world cup regional quarterfinal were held for students of the University of California, Los Angeles (UCLA).Experts from St. Petersburg organized five contests and five lectures, and it is possible that the training of the UCLA students will become regular.<
The numerous victories of ITMO University students serve as proof of leadership of the University in the preparation of world-class programmers.In 2014, Gennady Korotkevich, the university team member, became the undisputed champion on programming; he won all the major international competitions: Google Code Jam, Facebook Hacker Cup, Yandex.Algorithm, Russian Code Cup.And this year, the third year student, also began with winning the open world championship on programming - Facebook Hacker Cup 2015.


"As you know, the 21st century will be the century of China. This country is developing with a fantastic pace, and there is no doubt that in the next 20-30 years, it will become a huge scientific and technological country; it will be difficult to compete with it. But in the field of sports programming it is Russia, ITMO University, who opposes China. We have a special school, a great experience and methodology of teaching the extra class programmers, which was spread by Andrey Stankevich and his students, the world champions, who have shown talent and the ability to teach others. That's why foreign students come to us for training and we receive a huge number of proposals from different universities to come to them. Most often it is the universities that are part of the world ranking of leading universities," Vladimir Parfenov says, the dean of the Faculty of Information Technologies and Programming of ITMO University.