A debating club initiated by a software development company “JetBrains” was held on August 23. The main topic of this meeting was artificial intelligence. Aleksey Potapov, the professor of the Chair of Computer Photonics and Digital Video Processing of ITMO University, presented his lecture on AI. Mr. Potapov talked about the history of AI, its development and perspectives. 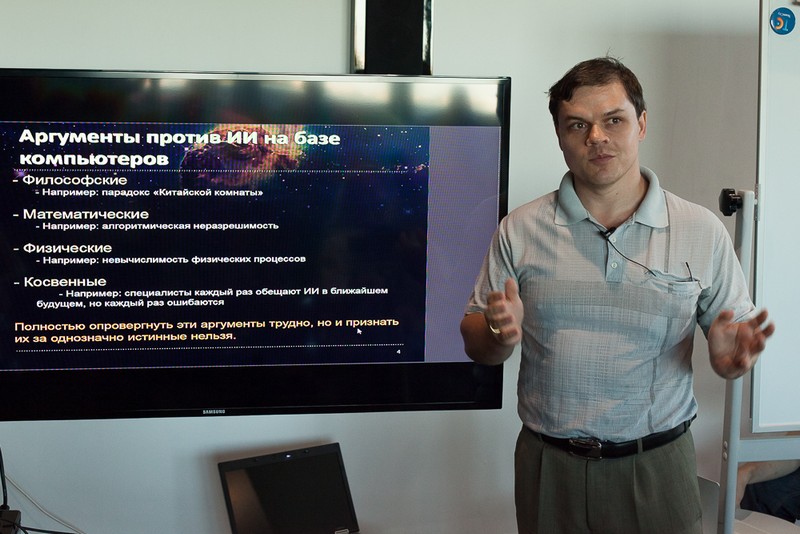 A term “artificial Intelligence” (AI) has different definitions. Usually it is a computer, which is smart as a human. However there is a doubt that AI can be based on a digital computer because it cannot comprehend. Speaking about this problem one can remember a thought experiment called “Chinese room”.   Take for example someone who doesn`t speak Chinese. He enters a special room in which there are several boxes with Chinese hieroglyphs. Then he is given a set of rules using which he has to construct Chinese sentences in order to answer different questions. In spite of the fact that answers are correct this person doesn`t understand Chinese language because the only thing he does is following these rules. He is not studying this language at all. This experiment invented by John Searle aimed to prove that a program cannot give a computer a "mind", "understanding" or "consciousness", regardless of how intelligently it may make it behave. Mr. Searle supposed that symbolmanipulating is not enough to have an intellect. However those researchers who criticize this experiment suppose that it is not correct because a person who makes Chinese phrases is only a mechanism, which puts these rules into action. In this case the room has to be intellectual being.

The birth of AI and the period of “AI winter”

The field of artificial intelligence research was founded as an academic discipline in 1950s. AI pioneers supposed that smart machines would be developed very soon. However they underestimated complication of this process.  Then researchers focused on application of AI but their projects didn`t attract investors. This misfortune led to AI declining and “AI winter” began.

In recent 15-20 years AI gains popularity because it focuses on applied areas. Moreover technological progress gives an opportunity to solve complicated problems. Now there are a lot of programs that can beat a human at chess and “Reversi”.

Modern technologies become smarter and smarter. A lot of computer applications are based on AI principle. For example intelligent search and email filtering. Besides more and more startups and business projects from all over the world are focused on development of so-called “strong AI”. However some famous experts as Bill Gates and Elon Musk suppose that AI can be dangerous. Mr.  Musk invested $20 million in “Good AI” company in order to develop AI. A half of this sun of money has to be spent for research, which should answer the question: what nuisance AI cancause? In the last two years AI security programs attract more investors than AI development.

AI based on human intelligence

There are different ways of AI development. One of them is whole brain emulation (WBE). On the one hand it is easier than AI development from the ground up because there is no need to invent a new operating principal. WBE aims to make human brain more powerful. On the other hand it is very difficult to use a human as a base because the process of WBE needs comprehensive facilities. Thus this way is more complicated than self-sustainable AI development. As an example one can remember cyborgization, which is still unresolved.

Strong and Weak AI vs Full and Narrow AI

Until 2000s AI was divided into strong and weak. Strong AI is capable of self-comprehension. Weak AI does not attempt to perform the full range of human cognitive abilities. It is more correct to name it “narrow” because it solves limited amount of problems. Thus strong AI should be called “full” because it aims to solve a variety of problems.

How to stop a headache? If one asks AI it will answer, “Cut this head off”. To develop AI it is necessary to eliminate all absurd answers. That is why a project “cyc” was invented. It is an artificial intelligence project that attempts to assemble a comprehensive ontology and knowledge base of everyday common sense knowledge. It contains millions of answers but this way leads to a deadlock. First of all symbols are recorded into AI. That is why it cannot analyze them using experience. Moreover AI system doesn`t acquire knowledge itself. An idea of pattern recognition as a way of AI development appeared in 1970s. Pattern recognition usually applies to neuron network construction.

The future of AI

It is very hard to predict the development of AI. However according to different estimation methods in 2030-2050 a full-fledged AI can be invented. In spite of the fact that there are a lot of doubts that it may be real.