Championship on programming: from Saint Petersburg to Ekaterinburg

June 19, 2014 at the ITMO University a "Day of Champions World Programming" was held. It was dedicated to the most prestigious computer tournament in the world ACM-ICPC. The event was followed by a press conference with the coaches and the winners of the championship, a roundtable discussion on the preparation of IT-specialists, as well as a teleconference with the Ural Federal University (UrFU), the host championship on programming this year. 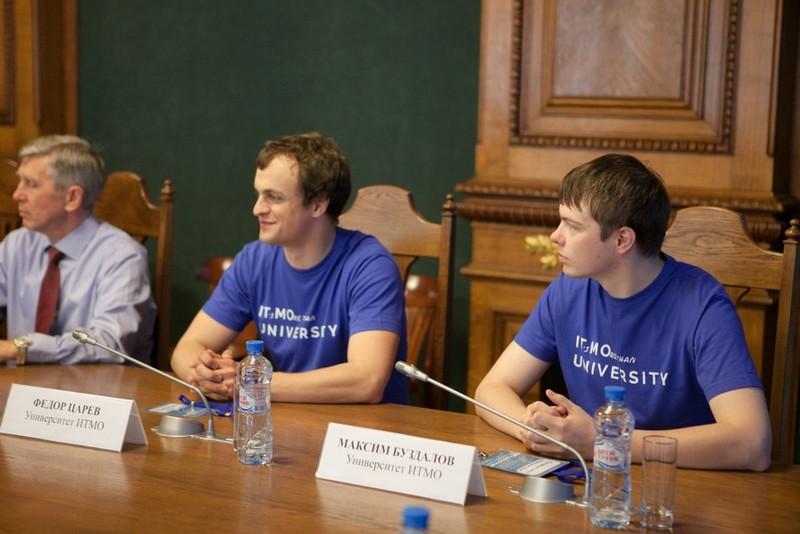 June 19, 2014 at the ITMO University a "Day of Champions World Programming" was held. It was dedicated to the most prestigious computer tournament in the world ACM-ICPC. The event was followed by a press conference with the coaches and the winners of the championship, a roundtable discussion on the preparation of IT-specialists, as well as a teleconference with the Ural Federal University (UrFU), the host championship on programming this year.

In 2013, on the initiative of the ITMO University ACM-ICPC Championships was held in Russia and become victorious for the university team. Becoming the world's only five-time champion of ACM-ICPC, the ITMO University in 2014 created the International School for sports programming, where 12 Russian and foreign teams were preparing for a trip to the World Championship, which begins in Ekaterinburg on June 22. The School was attended by students from Australia, the USA, Poland, Switzerland, Latvia, Peru and other countries. Opening the conference, the president of the «RUSSOFT» Valentin Makarov said that St. Petersburg is considered to be the birthplace of Russian programming. The city has a huge number of talented IT-specialists, and in this great achievement of the University of Information Technologies, which has created a unique system of training champions, victories and experience passed down from generation to generation.

In his speech, the rector of the ITMO University Vladimir Vasiliev said that despite the opportunity to get into the largest and most prestigious IT-companies in the world the plenty of champions of the ACM-ICPC from the ITMO University remain there to train a new generation of prospective students. "Our main resource is people. Only with human capital, we can talk about international competitiveness”, Vladimir Vasiliev says. - This year, creating an international school, we have proved that the ITMO University is really more than the university. We took on an important mission of preparing participants from other countries. So we begin to create the international community of universities, and our main task is to maintain this network cooperation".

Holders of the world title on programming Fedor Tsarev, Maxim Buzdalov and Niaz Nigmatullin said that the School recreated the atmosphere of the championship: the same type of problems, the same time frame and competitive spirit. Teachers deliver lectures and talk about how to solve competitive challenges quickly and efficiently. “These skills will be useful not only in the competition, but also in their professional activities. This experience allows us not to give up before the difficulties, and to search for approaches to solve them effectively, "- Maxim Buzdalov, the School teacher, said. The head of the School Fedor Tsarev shared with the audience his expectations regarding the upcoming championship: "Following the tournament gold, silver and bronze medals are awarded not to three but to twelve teams. In our school there are exactly twelve teams. We hope that they will get all the sets of medals".

In the final part of the press conference a teleconference with representatives of the Ural Federal University, receiving ACM-ICPC championship this year, was organized. From the side of UrFU the teleconference was attended by William Paucher, the executive director of ACM-ICPC, Dmitry Bugrov, the first vice rector of the UrFU, the final stage director of the ACM-ICPC-2014, and the coaches and participants of the championship. Representatives of the Ural Federal University spoke about the preparations for the upcoming championship and expressed the hope that the Russian team will win this year again.

The ITMO University has started a new tradition of ACM-ICPC and passed the baton to the championship with the help of the encoded message. UrFU students coped successfully with decoding the phrase and the Friedrich Nietzsche's famous statement: "Winners do not believe in coincidence" appeared on the screens of the ITMO University and the UrFU.

The last of the series of events was the roundtable on "The role of business in the development of IT-education". During the discussion emphasis was given to the workforce shortages in the IT-industry. Vladimir Parfenov, the dean of the Faculty of Information Technologies and Programming of the ITMO University, noted that today Russia is the one of the three world leaders in the field of information technology, along with China and the United States. In Russia the own search engines and social networks are created, and the country's competitiveness in the field of IT is not questioned. However, the business still lacks skilled in this area; and Vladimir Parfenov sees a lack of motivation among students as one of the main reasons for that. Anatoly Shalyto, the head of the Department of Programming Technology of the ITMO University, agreed: "Today, only 16% of Russian schools students are motivated. They are interested in the hard work and work on the result. The universities included in the top 100, the motivation of the students is very high, and this is where we need to aim".

Business representatives noted the high level of Russian graduates of IT-specialties.Andrey Ivanov, the Chief Operating Officer of JetBrains Company, stressed that the new employees who have graduated from universities or study the last years, are not necessary to retrain; their knowledge and skills are enough to work effectively.

Julia Sakharova, the Director of the St. Petersburg branch of HeadHunter spoke about quite high and growing demand for IT-specialists in the labor market and stressed that today any business is interested in specialists with technical education: "The system of thinking of the person receiving technical education is clearly structured, which allows him to solve effectively any problems. Demand for IT-specialists is growing: according to research 62% IT-companies are planning to increase the personnel reserve this year".

At the end of the meeting the presentation of the film "Computer boys", dedicated to St. Petersburg world champions on programming, was organized for the participants of the round table. Before the show Alexander Slobodskiy, the film director told about the shooting and said that St. Petersburg is called the capital of Russian programming: "When you work with these talented guys, you know that our country has great potential with such people".