The ITMO University took part in the festival of technology, science and art Geek Picknic-2014, held on 9-10 of August at the Elagin Island. At the annual scientific picnic students and staff of the University have presented their developments in the field of laser technology and robotics 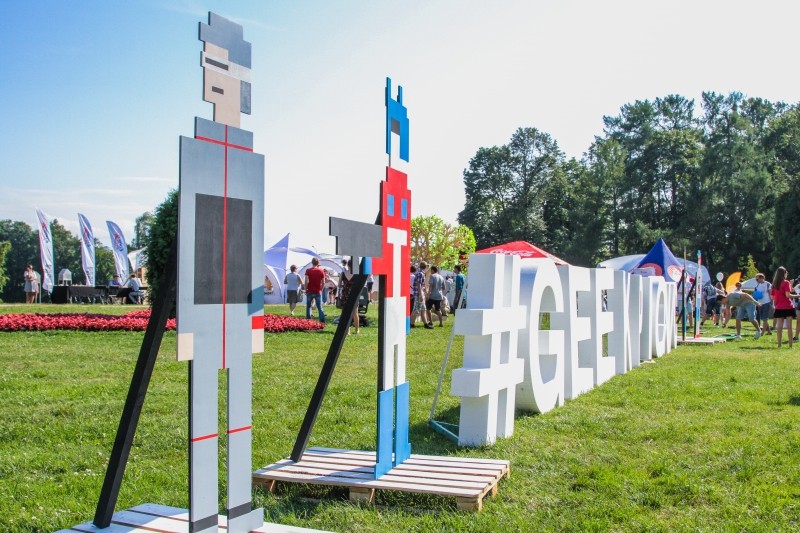 The ITMO University took part in the festival of technology, science and art Geek Picknic-2014, held on 9-10 of August at the Elagin Island. At the annual scientific picnic students and staff of the University have presented their developments in the field of laser technology and robotics.

Geek Picknic-2014, the one of the largest scientific festivals in Russia, has held again In St. Petersburg. Open air traditionally attracts smart, educated, talented young people who want to acquire knowledge, new discoveries and interesting acquaintances. The festival presented the latest technological developments, which recently were possible only in science fiction movies and will soon become the norm in our everyday life: a variety of robots, exoskeletons, bionic implants, 3D printing of furniture and much more.

According to Rinat Magdiev, the dean of the Faculty of Fine Mechanics and Technology, developments of the ITMO University looked very dignified compared with other participants. "Good weather is already the key to success in St. Petersburg. I just started crawling, but I see that our exhibits at the level of the exposed samples. Only positive impressions. And I am particularly pleased that there is a lot of smart young people at the exhibition".

Among the technical innovations of the ITMO University the diploma and course projects of the students of the first and second courses were presented: vertical pendulum, Kapitza pendulum. The robot promoter "Johnny" was especially popular among the visitors of the festival. It was handing out information leaflets to guests of the festival for the "smile". "People are interested to interact with the robot and receive information about the university from the machine. This affects the perception of robotics by people and is, in my opinion, the most effective way to popularize science” Alisher Hasanov, thegraduate student of the Department of Management and Informatics of the ITMO University, said. “At these exhibitions there is a lot of young people with different interests, they see what developments are carried out by their colleagues or students from other universities. It is interesting for schoolchildren to look at what they may be engaged in later at the university. This is a good way to promote science to the masses".

In addition to the robots in the pavilion of the ITMO University laser engraver was presented. Guests were glad to give their pens, phones and other gadgets to the specialists to paint gadgets by laser. Another popular exhibit of the university pavilion was foto room. During working hours the unit stream wishing to take a photo on the memory did not stop.

It is worth noting that many who came to the festival proved to be closely related to science, technology and art. Someons works in these areas, someone studies, and someone is just going to enter the university. The last were very interested in the new presentation of the ITMO University. Parents of future students actively asked about the scientific schools, educational programs and opportunities of entering the university.

Guests of the festival answered the question of what they liked most of the ITMO University exhibits differently:

"I really liked the robot promoter. Cool thing! It can be used for events. I myself am studying to be a specialist in public relations, so I see a lot of prospects for this development " (Maria, 21 years old).

"I liked laser engraver most of all. I even have made a picture on my phone"(Sergei, 25 years).

"We actually were going in the area of art, but when we saw the foto room of the ITMO University we could not pass. Now we have a lot of fun pictures from the festival"(Elena and Anton, 22, and 24 years).

We can say that the festival on Elagin island was really a holiday of science, technology and art. Scientific and technological progress has ceased to be something far away for thousands of people who visited the Geek Picknic over the weekend. Exhibits that change reality, approximating the future and carrying away by its incredible complexity, stepped from the screens and become a reality. It is not necessarily to understand the tricks of engineering and robotics, it was enough just to see, to try, to be interested, and XXII century has become closer.