Innopolis University is the Russian miniature analog of the Silicon Valley. The country's future center for IT has started to enroll students for Bachelor's and Master's programs since 2015. Many programs are unique to Russia, the lectures are all in English, and 70% of the study time is dedicated to practical work. What is more, the students participate in real projects for the university's partner companies and are given the opportunity to create their own innovative enterprise. Ivan Zusik, one of the students from ITMO's Chair of Technological Entrepreneurship and Innovations, has enrolled in Innopolis for one of the key Master's programs - "Software Development". In an interview for our web portal, he talked about the difficulties he expects from studying at Innopolis and what awaits him after the end of this program. 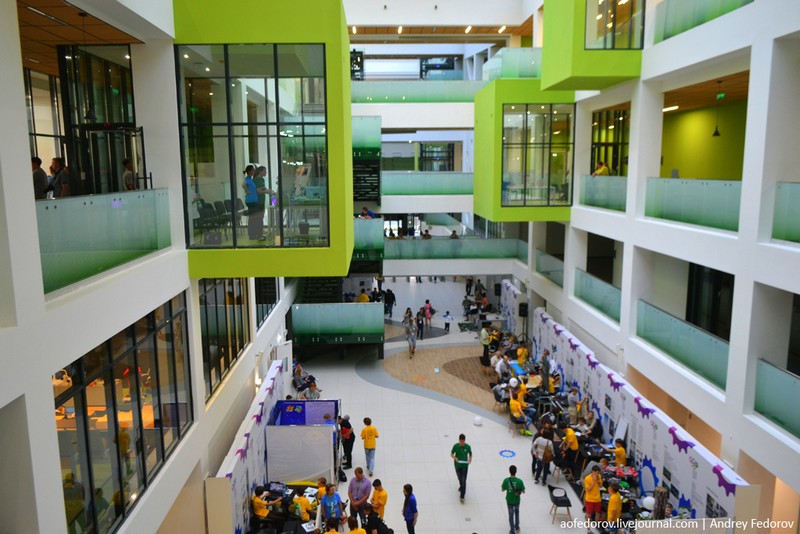 How to enroll at Innopolis

I decided to apply for Innopolis on my friend's advice -  he's already been studying there for some time and told me that was a great experience. So, I sent in my application.  Then, I had to take two tests - one for Computer Science and one in English. I was also supposed to write a motivation letter, as well as send in some letters of recommendation, but I didn't do it, for I doubted if I indeed needed this program. Then I found out that the admission committee for Innopolis comes to St. Petersburg to conduct on-site examinations, which meant that I didn’t have to go to Tatarstan, where Innopolis is located, to take the tests. So I wrote a motivation letter, asked my scientific advisor to write me a recommendation and added them to my admission documents. I didn't receive an invitation to the first round of tests, but I decided to go there nonetheless. It turned out that I did the right thing: they told me that my application could have still been processed. During the first hour of the on-site examination, I had to take an IQ test. It consisted of standard tasks testing logic and analytical skills: the most difficult one had to do with anagrams - they were in English and I just didn't know some of the words. Then there was an interview with a professor, also in English. Here, the most difficult thing for me was translating the names of algorithms. I also had to take a stress test, mandatory for all the applicants because the workload is very high in Innopolis. In the end, I thought that I’d messed everything up. Yet, I had two more interviews on Skype in a month: one on general topics, about my expectations of studying in Tatarstan, and another on my knowledge of algorithms. After another month, I learned that my grant for education was approved. It's worth mentioning that the students are enrolled via a competitive examination, and the university pays for the winner's food and board. In June, I went to the Summer School in Innopolis - this was something like a rehearsal of the educational process which will begin on August 15. I will be studying in Tatarstan for a year, then I want to finish my Master's program at ITMO University. All the programs at Innopolis are in English. Most of the professors are from foreign universities, though there are also some Russian scientists as well. My Master's program in "Software Development" uses licensed learning materials from the Carnegie Mellon University (USA). All of the academic staff for the program were certified by this university, or are from it. I've talked to the students from last year, and they told me that studying at Innopolis is hard indeed, but the experience you get is really valuable for your future career. The curriculum focuses on practical tasks: the theory takes only 30% of the study time. All the rest goes to practical work in teams. Roughly speaking, it goes as following: you listen to the theory in the morning and then put it all in practice in the evening. You also change your team several times during the program. Thus, the students learn to find common ground with different colleagues. Starting with spring, the students can participate in the development of real projects for the university's partner companies. Among those are such companies as Mail.ru, Megafon, Kaspersky, Parallels, Skolkovo Tech, Rostech and others. During such work, the students can inquire details necessary for the project's completion from the company's representatives. All these projects help optimize the work of the company, or increase its profits - hence, they are really useful. Thanks to that, Innopolises graduates possess most modern knowledge, the skills they got at the university are the ones they'll be using in their future work. Still, I have to say that it's true for ITMO University as well. The knowledge I got here was enough to start working at an IT company in St. Petersburg on the third year of my education. The student town at Innopolis is great. It is built in a way so that people would like it and no-one will want to leave. There are two kinds of lodgings. The standard ones are two-room apartments with a kitchen and a bathroom, cleaned weekly. You can also live alone, but this is more expensive. If the students bring families with them, they can rent an apartment in the town. As of now, there are four campuses in Innopolis, interconnected by heated passages, that are also connected to the building of the university. Those are very comfortable: you can access Internet from anywhere, there are enough sockets on the walls, so one can easily find a place to work on his projects. There are also special areas in the university where students can work after 11pm. Innopolis also has a big sports complex with a swimming pool, a stadium, a medical center, as well as a business center for partner companies. New innovative enterprises created by the university's students and graduates are to work there in the future. There are also recreational facilities for the town's residents, as well as different events - when I was in Innopolis, one could watch open-air films. The university also has a contract with the nearby ski center, so the students can get equipment and ski there for free. In summer, one can play golf. Innopolis has a unique atmosphere: though it is a town, there is no hustle and bustle and you can see the stars at night. What to do in Innopolis after graduation

During their education, students are not allowed to work anywhere without the consent of the administration. And after the graduation, one has to work for a year and a half in one of the partner companies. Actually, it's not some unpleasant obligation, but a great chance to receive valuable experience. Graduates are given six months to find an employer. If you can't get a job in one of the partner companies, you can look for internship in Kazan. Staying at the university and becoming a lecturer is also an option. The third way is to start your own IT business in Innopolis. I don't know yet which bonuses are given to the residents of Innopolis, but I know for sure that there are tax benefits, and new projects have overall support. All in all, the whole town was built for creating and developing startups and other innovative activities. As of now, the university lives off donations and contributions, including those done by the partner companies.

Editorial comments: according to the official annual report of Innopolis University, partnership contributions and donations in 2015 amounted to almost 536 million rubles. By the end of the year, 14 universities became Innopolises partners, including those with high positions in international rankings. More than 20 thousand students applied to Innopolis, whereas only 352 were enrolled. The expected number of students to be enrolled in 2016 is 275. ITMO University is one of Russia's leading educational establishments, its most talented students continue their education in Innopolis.