Magic of Light Exhibition in Shanghai: The Dazzling Results

The interactive exhibition of holographic installations Magic of Light, organized by ITMO University together with the Hellenic Institute of Holography, has recently come to an end. The exhibition was hosted on 1,000 square meters of Shanghai Science and Technology Museum and featured over 150 items, including ultra-realistic full-color holograms and optoclones from the collections of the Hermitage, the Fabergé Museum, and the Diamond Fund. In the course of four months, some 300,000 people attended the exhibition. In this article by ITMO.NEWS, the staff of ITMO’s Museum of Optics share about their experiences of organizing the exhibition. 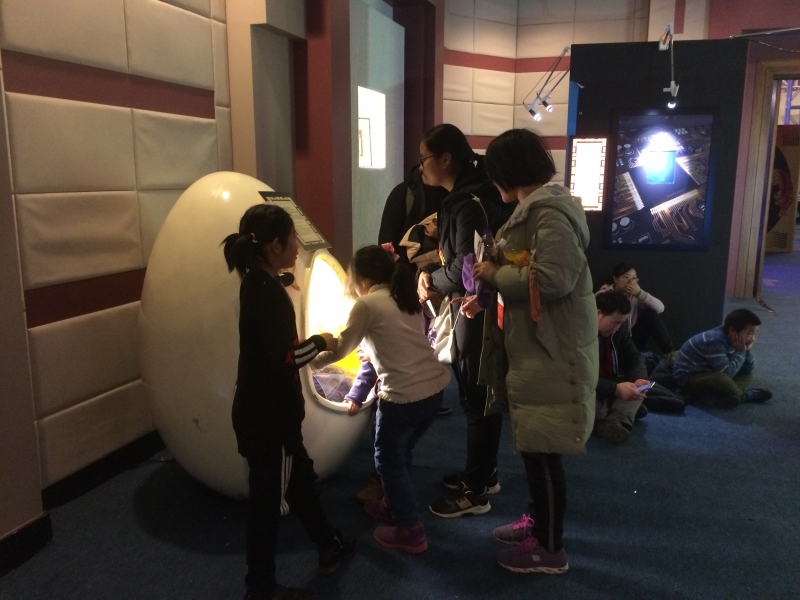 Founded in 2006, ITMO University’s Museum of Optics is Russia’s first field-oriented university museum, which focuses on explaining the principles of science in an interactive format. Since the museum’s launch, its curator Sergey Stafeev has coordinated a range of educational projects, such as the interactive museum for children “Labirintum”, the science and entertainment center Unicum, and the Tomsk Museum of Science, to name but a few.

The main distinguishing feature of ITMO’s Museum of Optics is its unique collection of holograms, which formed the centerpiece of the exhibition in Shanghai.

“The museum had long worked behind closed doors, and you had to register in advance if you wanted to visit it. Among our visitors were mainly school students and ITMO University’s partners, and sometimes tourists. The museum worked like this until 2015, when the first Magic of Light exhibition was organized, which changed the situation completely. In the course of four months, over 100,000 people attended the exhibition and learned about our museum, so we just couldn’t close it back, and now its doors are open to anyone interested in this field,” shares Elena Bobritskaia, the head of the Museum of Optics.

One of the reasons for the exhibition’s success is that this project is the result of close collaboration between ITMO University and the Hellenic Institute of Holography. In 2017, the exhibition’s coordinators decided to repeat the successes of 2015 and 2016 and give it more visibility, and such an opportunity was not long in coming.

“Half a year prior to the start of the exhibition in Shanghai, we developed a strategy and started preparing our collection for transportation. As it was our first experience of organizing such an exhibition abroad, it took us quite a while to understand what exactly was needed to be done. We had to rent huge warehouses, to where we brought all our exhibit items. Initially, we planned to transport the items by sea, which is the cheapest option out there. It would have taken 30-40 days. We contemplated a lot on how to organize it the best way possible and decided to go by plane instead,” recollects Elena Bobritskaia.

It’s not only the Russian and Greek parties that took an individual approach to each specific item but the Chinese as well. According to the Museum’s staff, there is no traveling exhibition that would be so well-organized.

“The position of China regarding science communication is a very clear and consistent one: science communication is very important and needs to be propelled by regular budgetary allocations. Scientific centers and museums in China put a lot of effort into attracting and retaining visitors. To achieve this goal, they change their temporary exhibitions topics regularly. This is exactly what Shanghai Science and Technology Museum does. What also played its role was that as with our first time organizing such an exhibition abroad, we had to learn a lot about how things are done in this field. The thing is that a typical temporary exhibition in China includes several museum items and some 10-15 interactive ones, while our collection is comprised of over 150 items, including a huge collection of holograms made of more than 100 items, as well as interactive 3D items,” shares Daniil Sharov, a Master’s student at ITMO University’s program in Science Communication, a staff at ITMO’s Museum of Optics, and one of the curators of the Magic of Light exhibition.

Visitors of the exhibition

Shanghai is the biggest city in the world. Shanghai Science and Technology Museum had long been the biggest science museum in the world, until it was replaced by the Guangdong Science Center in 2008. Nowadays, some 9,000 people visit the museum daily, 40-50% of which have attended the Magic of Light exhibition. In the course of four months, a total of 300,000 people saw ITMO’s collection.

“I did an internship at Shanghai Science and Technology Museum. I spent three months in Shanghai coordinating the exhibition from the Russian side. During my internship, I conducted a couple of surveys, which became part of my thesis. In my research, I assess the efficiency of science communication methods that the concept of the exhibition is based on. What I wanted to achieve here is to establish how effective is the concept underlying the 2015 and 2016 exhibitions and continued in 2019 one, and which methods could be used to evaluate and measure its effectiveness. To do this, I used different analytical tools. For one, the venue for the exhibition had six cameras which captured most of the display. They allowed me to study how visitors interacted with the items without disturbing them with my presence, and also to establish the timeframes of such interactions.

“As a result, I developed some sort of a heat map. In addition, I managed to conduct a survey of visitors, which would have been impossible had I not been partnered with a wonderful colleague who helped me with all the translations. I also asked the museum staff to reach out to a group of school students so I could hold a class in English explaining them the thematics of the exhibition, with another aim being to conduct some research with the participation of a specific group. To make the kids more engaged in the topic, I started with showing them a couple of thematic experiments, and then I gave them a tour of the exhibition with a step-by-step explanation of what holography is. I did a survey before and after the class, and then sent in another one a week later. The resulting data showed the dynamics of the students’ knowledge levels. I plan to conduct a similar study in Russia with local school kids, too,” shares Daniil Sharov.

On average, the exhibition attracted some 4,000 people on a daily basis. The largest influx of visitors was during the first days, with up to 8,000 people making it to the museum because of the Chinese New Year. For reference, the average visitor attendance record for ITMO University’s Optics Museum fluctuates around the number of 5,000 to 6,000 people per month. The main visitor audience is school students (ranging from elementary to middle school).

“The specifics of museum work at Shanghai Science and Technology Museum is such that parents are not very strict about their kids touching or mistreating the items on display, and latter happens all the time despite all the efforts by the museum staff to stop such behavior. The way adults conduct themselves oftentimes is also not very museum-appropriate: they would eat near the showpieces, for example. Because the number of visitors is much bigger than at our museum, there have been a lot more problems occurring. The way temporary and permanent exhibitions operate is, if something on the display breaks, you have to lock it up and put it away. I took a different approach: I tried to fix damaged items on the spot, after the museum closed off for the day. While I had to treat many items several times a day in the beginning, the situation majorly improved closer to the end of the exhibition, with only a couple of items needing some repair, all because I learned the trick,” explains Daniil Sharov.

Amounting to 1,000 meters square, the total exhibition area housed over 150 items and 100 holograms. Only the plugging-in of objects took a whopping 15 minutes, the same amount of time needed to pass through the whole exhibition without stopping by any item for a closer examination. The overall tour lasted for an hour.

“Unlike other traveling exhibitions, ours wasn’t an assembly-belt type one: we approached each item on a unique basis, fixing it on a bespoke construction we developed on our own. The experiences we had with some items made us realize that we should probably reconsider this approach as it isn’t ideal for such a large flow of visitors. Now, and it is thanks to our efforts with the ongoing maintenance of the exhibits, we understand that around ten of them should be reconceptualized. We have to learn to adapt because of the specifics of the market, and we see in this a great potential for development,” says Daniil Sharov.

According to the coordinators, in the exhibition’s four-months sojourn at Shanghai Science and Technology Museum, it was visited by people from all around the world, namely from France, Russia, Thailand, Malaysia, Japan, the US and other countries. Magic of Light was also attended by official delegations from other museums engaged in the popularization of science. Some of them expressed interest in seeing it within their own walls, with the National Science Museum of Thailand and the China Science and Technology Museum emerging as potential future hosts.

ITMO’s delegation to Shanghai Science and Technology Museum included four of its students, who helped with setting the exhibition up. All in all, it took seven specialists from Russia, five members of staff from Hellenic Institute of Holography and the museum’s own 20 specialists to accomplish this task. ITMO students also helped to create several items featured in the exhibition. The museum staff and the specialists from the University’s Fablab hosted a special meeting, during which they suggested a couple of items they would like to see included in the display.

The students from the Faculty of Software Engineering and Computer Systems and the Faculty of Applied Optics that responded to this open call chose the ideas they liked the most and then proceeded to implement these completely by their own efforts. Among the exhibits they created were the reverspective illusion baptistery painting by Filippo Brunelleschi (performed by Nikita Kintzel), a depiction of a dragon only visible in polarized light (created by Daria Solovyeva, Daria Lampadova, and Ekaterina Sharova), and several stereoscopic images by Rita Kapitan and Nadezhda Longvin.

Some of the exhibits were developed by external companies and artists specializing in the creation of objects in the field of Art & Science. Examples included the digital mirror and the OPUS art object by the company Sonicology.