An interactive exhibition of holographic installations Magic of Light, organized by ITMO University together with the Hellenic Institute of Holography, has just opened its doors for visitors. The exhibition is hosted on 1,000 square meters of Shanghai Science and Technology Museum and features over 150 items, including ultra-realistic full-color holograms, optoclones from the collection of the Hermitage, the Fabergé Museum, and the Diamond Fund. 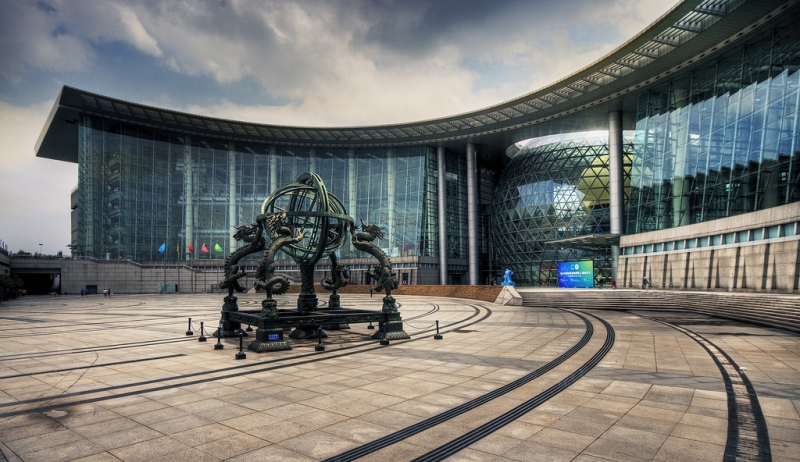 Organized by ITMO University in collaboration with the Hellenic Institute of Holography (HIH), the exhibition kicked off on January 25 at Shanghai Science and Technology Museum.

Magic of Light features a combination of modern visualization technologies, unique objects and interactive educational activities. The main focus of the exhibition is on art holography, a method that has shown great results in both museum collections imaging and dynamic digital 3D modeling. That’s the reason why the exhibition opens with a portrait hologram of Yuri Denisyuk, the founder of optical holography, placed next to several unique holograms with extraordinary optical properties.

The central part of the exhibition area is occupied by a holographic core surrounded by display stands and exhibit items, where you can learn all about various optical phenomena such as reflection and deflection, light spectrum characteristics, stereo imaging, and hidden images.

In this area, visitors can learn about the history of stereoscopy and the latest achievements in this field. Among the items on display are moving images, multiangle holograms, ancient Chinese frescoes with a perspective, renaissance paintings and Byzantine icons that incorporate various methods of perspective construction.

In addition to that, there is an area where you can familiarize yourself with some 3D technologies that require using special glasses: polarized, Anaglyph (red and cyan), and diffraction.

The main focus of the exhibition lies on a selection of masterpieces of art holography, the so-called optoclones. These are ultra-realistic full-color holograms which create the illusion of the physical presence of a three-dimensional object. The objects the holograms represent are also one-of-a-kind. Among the highlights are the biggest treasures of the Russian Empire: Fabergé eggs, and the objects from the Diamond Fund. The thing is that in reality, these objects cannot be moved abroad, so the guests of Shanghai Science and Technology Museum are given an opportunity to see the esclavage bow that belonged to Empress Catherine I, as well as lots of other interesting objects.

The list of exhibition items also includes the holograms of world culture riches such as Scythian gold jewelry, Chinese bronze wares from the collection of St. Petersburg’s State Hermitage Museum, and an ancient mummy from the British Museum.

In case you want to learn more about the principles of holographic imaging and see the models of holographic equipment, visit the Explaintorium area featuring a series of sci-tech installations and a small cinema hall screening two 5-minute videos about art holography and laser technologies.

To interest the children visitors, the organizers created a holographic World of Nature populated by lots of 3D images of flora and fauna. As for the last part of the exhibition, it’s presented as a hall of mirrors, with a range of holographic portraits on display.

Invisibility module and an interactive hall of mirrors

Exiting the labyrinth, visitors can either head for the final Hall of Mirrors part via a mysterious area full of colorful shadows, or make a detour to a dark room filled with light installations and various other attractions. This is enabled by the UV lighting which dazzles visitors with a whole forest of multi-colored luminescent threads as soon as they enter the room.

In this area, participants can try their hand at light-drawing or even experience freezing their own shadows, all thanks to the specially-treated surfaces. Covered with multiple layers of fluorescent dye, one part of the wall will preserve light images for just about two minutes. The other part of the wall is treated with retroreflective film, which is needed for reflecting the light in the opposite direction. As a result, any selfie taken against this wall will give you an outline of your own silhouette.

The final interactive area begins with a hall of colorful shadows and a light-and-music installation called Laser Harp. And after these have been visited and marveled at, exhibition guests will have a chance to take a peek at themselves as an infrared image by studying the so-called Kirlian radiation of their fingers. Bearing the name of its discoverer, this visualization method implies the lighting-up of biological objects in a gas-discharge plasma field. After the exhibition, visitors will get a plasma photograph of their fingerprints, which is created by in-built equipment designed and produced in Russia.

Amounting to 1,000 meters square, the total exhibition area houses over 150 items. As told by Sergey Stafeev, the exhibition’s organizer and professor at ITMO University’s Faculty of Physics and Engineering, the items displayed include objects that were created in different periods of ITMO and Vavilov State Optical Institute’s history and constitute the historical collection of ITMO’s Museum of Optics. Around 40% of the exhibition’s showpieces is represented by new items designed by ITMO University specialists especially for the event; the remaining part is a contribution by the Hellenic Institute of Holography, which can boast a great number of unique items in its repository.

The Magic of Light exhibition dates back to 2013 when it first opened its doors to visitors on the Greek island of Crete. In 2015, as part of the international Year of Light, the exhibition was showcased in St. Petersburg, wrapping up as a resounding success. In 2016, after wowing the Northern Venice’s audience, the exhibition traveled to Moscow, where it was held in the grandiose Saltykov-Chertkov Mansion on Myasnitskaya Street. In the two years that followed, the organizers did a big job on expanding and perfecting the exhibition display, for it to meet all international standards and be more interesting for the wider public.

“Over the course of two years, our Greek colleagues and we focused on transforming Magic of Light into a product worthy of being showcased in any world-class museum. What we have now is a high-quality, mobile exhibition with interesting items that are packaged correctly and come with a detailed description,” says Sergey Stafeev. “As one of the world’s biggest museums in its category, Shanghai Science and Technology Museum is very important for us. It has to be noted that its director first saw the exhibition as far back as in 2015; he also visited the Museum of Optics and keeps track of the research done by ITMO University. So when we were picking a venue to showcase our new and improved exhibition, Shanghai Science and Technology Museum was, to no surprise, first on our list.”

Magic of Light’s international success is a done deal, says Alkis Lembessis, head of the Hellenic Institute of Holography, pointing to all the success the exhibition had on Crete five years ago. He also highlights the great contribution of the Museum of Optics, which, in his words, serves a sort of a training area that allows the team to experiment with ideas, choose the best ones and implement the results into creating quality products fit for international exhibitions.

Magic of Light will stay in the Shanghai Science and Technology Museum for the next four months, after which it is expected to travel to other museums, namely Beijing Museum, a delegation of which attended the exhibition’s opening and expressed an interest in welcoming it within their walls next.