ITMO University, the Hellenic Institute of Holography and Gokhran Russia have collaborated on a unique collection of optoclones of unique historical treasures from the Russian Diamond Fund and the State Fund of Precious Metals and Stones. Preserved as holograms, these items have not lost a bit of their volume and luxury. Sergei Stafeev, the scientific curator of ITMO’s Museum of Optics, tells us how these copies were made and where they’ll be on display. 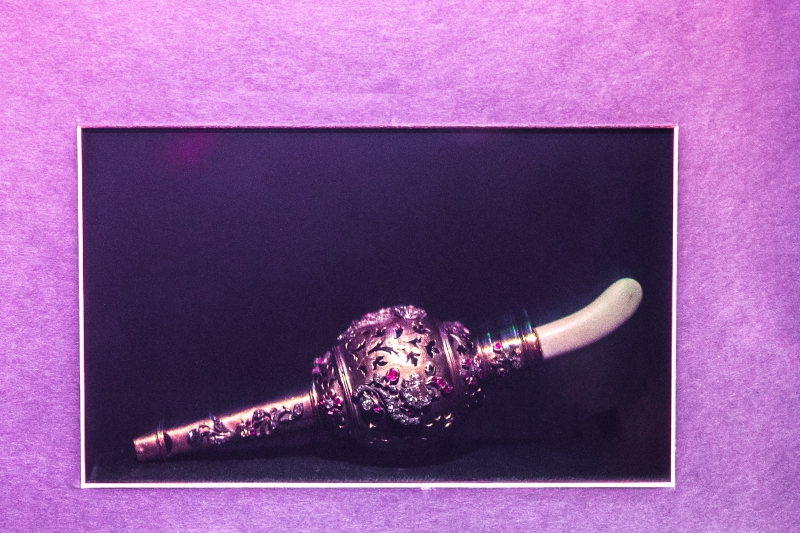 Optoclone of an artifact from the Russian Diamond Fund

November of 2017 marked a 50-year anniversary of the opening of the “Almazny Fund” exhibition, a permanent fixture of the Moscow Kremlin. The Diamond Fund of the Russian Federation is a part of the State Fund of Precious Metals and Stones (Gokhran Russia) and is a collection of state regalia, unique precious metals, and jewelry of immense historical and artistic value. Gokhran Russia operates under the Russian Ministry of Finance.  To celebrate the anniversary of the exhibition’s opening, the staff of the Ministry, along with Deputy Finance Minister Alexei Moiseev, decided to create a set of optoclones of the unique items in Gokhran’s storage.

The Deputy Minister’s first experience with the optocloning technology happened at ITMO University’s Museum of Optics – here, Mr. Moiseev was impressed by the ultra-realistic full-color holograms of Karl Fabergé’s famed collection of jeweled Easter eggs. Soon after that, a committee from the Gokhran came to the university to examine the holograms more closely, followed by a visit of representatives from ITMO to the capital, where they spoke about the optocloning technology. The meetings resulted in a decision to create a set of ultra-realistic full-color holograms of valuable items from Gokhran and the Diamond Fund’s collection.

Since all of the optoclones are made by the staff of ITMO University in collaboration with scientists from the Hellenic Institute of Holography (HIH), Alkis Lembessis, director of HIH, was present at the meeting, too. The parties agreed on the production of optoclones of ten unique objects, all in two copies. The list includes famed pendants, medals, tiaras, sculptures and others.

“The list would be constantly adjusted, as all the chosen objects had to fit certain criteria. For instance, there had to be no dangling parts – if there is any movement when a hologram is made, the final product will contain dark spots, and parts that have moved by even half a micron will not be visible. For these reasons, we had to exclude the famous “Diamond Rose” brooch and Catherine the Great’s miniature gem hat,” – explains Sergei Stafeev, a professor at the Department of Physics and the scientific curator of ITMO’s Museum of Optics.

Creation of the optoclones involved several stages. The first – and the most important – took place inside the Gokhran’s building, as the objects are expressly forbidden from being taken out of the vaults. Experts from HIH and ITMO only had three weeks to make optical copies of all the objects. For that, they used Zzzyclops, a compact three-color laser camera that lets scientists create holograms right inside museums and vaults.

“Each of the objects could only be taken out for a day. In that one day, we had to make at least two perfect copies, which is at least five or six attempts. The number of copies always depends on a number of factors: the objects’ oscillation, air humidity, sound, quality of the plates on which the copies are imprinted, and others. The conditions were tough, as we were working in a closed space with priceless objects,” – explains Prof. Stafeev.

The team, which included staff of ITMO and HIH, required a week to make the first samples and learn to control the humidity level in the room they were provided. By the third week, the team was already making copies of two objects per day. The first stage lasted three weeks and, in June 2017, the copies were sent to ITMO University for final processing. In September, the second stage began at one of the university’s buildings.

“To make a quality copy of an object, it must remain at the temperature of its surrounding environment for a certain amount of time. The item itself is illuminated by a laser for 10 to 20 seconds, depending on the material. Besides, each object has different colorization. The device we’re using lets us set different exposure times for the red, green and blue lasers. After several tests, it becomes obvious that one color needs 15 seconds, another – 20. This is the kind of process where there isn’t a strict algorithm that applies to everything – it has to be tuned for each individual object,” – explains Andreas Sarakinos, Scientific Director at HIH, who headed the workgroup.

From ITMO’s side, the project group was joined by Sergei Stafeev, Mikhail Shevtsov, Elena Bobritskaya, and Natalia Goncharova, a student at the Faculty of Laser and Light Engineering. The Greek side was represented by Andreas Sarakinos, Alkis Lembessis, and Kostas Sarakinos. According to the agreement, the team could not involve a great number of members; no more than four people were allowed to be in the room at any given time, as the process had to be stopped if the air humidity index reached more than 60%.

“Initially, a hologram looks like a transparent plate, and you can’t see anything on it until it has been properly processed. It has to be hermetically sealed, too, because over time the emulsion layer may degrade. From behind, a plate of black glass is attached using a special optically transparent sealant that ensures the integrity of the hologram’s color palette. To illuminate this kind of holograms, we use a tunable RGB source (Holofos-HIH) with dichroic filters that feeds off a regular power supply. In October, we presented the optoclones to Gokhran: twenty holograms of ten unique objects. The second set was made with autonomous light sources powered by batteries – as a backup option,” – tells us Prof. Stafeev.

In a conversation with ITMO’s Rector Vladimir Vasilyev, head of Gokhran Andrey Yurin gave high praise to the project and thanked the staff of ITMO University and HIH for their hard work in difficult conditions. The optoclones were popular with the renowned guests of the event dedicated to the 50th anniversary of “Almazny Fund” exhibition. Among some of the international guests were главный смотритель Сокровищницы британской короны в Лондонском Тауэре Амичанд Нивек, Gerle Morgan, Director at Department of Royal Palaces (Sweden), Staffan Larsson, the Governor of the Royal Palaces (Sweden) and others.

Optocloning technology increases manifold the number of people who can see realistic reproductions of treasures of national or global value. The second set of optoclones will be exhibited at various venues in Russia and abroad. The idea of “touring” the optoclones across the country belongs to Russian Prime Minister Dmitry Medvedev. The first exhibitions are planned for spring and summer of 2018.

Part of the optoclone collection is currently held at ITMO University – the university’s staff were granted permission to display five holograms of the more famous objects at ITMO’s Museum of Optics. Two optoclones were shown at the State Historical Museum in Moscow and at the State Optics Museum. The clones’ cross-country journey will start in the summer, starting with the State Historical Museum of South Ural in Chelyabinsk. Negotiations are nearly finished regarding a major hologram exhibition at the Shanghai Science and Technology Museum in January 2019. This, too, would be a collaborative project by ITMO and HIH.

Today, as part of an Art & Science agreement between ITMO University and the State Hermitage Museum, preparations are being made to set up a joint holographic lab. Optocloning of the museum’s unique items (including those stored in the Hermitage’s Gold Room) will be carried out on the museum grounds. Over the course of a year, specialists will create hundreds of full-color holographic copies for all sixteen branches of Russia’s most famous museum.

The technology for creating holographic copies of museum items was born in St. Petersburg in the 1970’s. Its author was the renowned Soviet physicist Yuri Denisyuk – a graduate and professor of the Leningrad Institute of Precise Mechanics and Optics (LITMO, now known as ITMO University).

There are many types of holography, but the idea of artistic holography, including for the creation of optical copies of museum items, belongs to Denisyuk. Today, this technology is known all over the world as “Denisyuk hologram”. Optoclones are the most perfect holograms made using Denisyuk’s methods and the latest achievements in optics: next-gen compact lasers, photomaterials with increased diffraction efficiency and innovative lighting systems. The term “optoclone” is not just a general term, but a registered trademark of the Hellenic Institute of Holography that refers to the ultra-realistic full-color Denisyuk holograms.

“In the 90’s, when we created monochrome holograms of the Hermitage’s items, objects would only be sent to the laboratory with the written permission of the director, Mikhail Piotrovsky. The holographic equipment we used was bulky, heavy and required specific conditions. It was outright impossible to record holograms in the museum. Zhores Alferov’s creation of the world’s first semiconductor heterostructure laser, which can work at room temperature, revolutionized the production of artistic holograms. Later on, the Denisyuk method found use abroad, and in particular at the Hellenic Institute of Holography, who further improved the technology and created a compact holographic chamber, which is successfully used at museums all over the world. Today, the technology returns to Russia, capable of creating optoclones, which are full-color ultra-realistic Denisyuk holograms. These optical copies are indistinguishable from the originals, and they really open up a lot of opportunities for museums, collectors, and art restorers. Another innovation are the photomaterials themselves. Plates that are sensitive to the entire visible spectrum can only be found abroad today. However, we have a chance to change this; in the future, with the experience of our Greek colleagues and the potential offered by ITMO’s Biochemistry Cluster, we may be able to supply holographic plates ourselves and ensure a closed-cycle production,” – concludes Sergei Stafeev.