How the Stones of Ancestors Exhibition Changes Our Perception of Archaeology

This week is your last chance to visit the exhibition of Stone Age artifacts at the A.S. Popov Central Museum of Communications. The exhibition is a DIY project created by enthusiastic archaeologists, artists, historians, and science communicators. 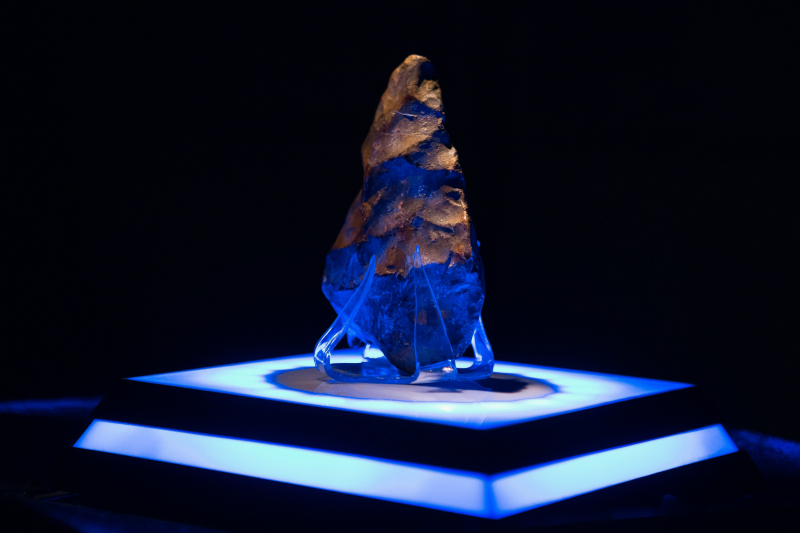 The Stones of Ancestors Exhibition

Ekaterina Loginova, an analyst at ITMO University’s Center for Science Communication, took part in the project and helped with market placement, communication strategies, and promotion. The latter was especially important, as the project was self-financed by its team members without support of state institutions or grants. We talked to Ekaterina Loginova and Nikolay Sevastyanov, curator of the exhibition, about its concept, message, as well as making science appealing and accessible.

Nikolay Sevastyanov came up with the idea of displaying archaeological objects in a new, modern way about four years ago. It took several years to form the team, which now consists of Nikolay’s colleagues and classmates from the archaeological department of the St. Petersburg State University, as well as architects, designers, and artists.

The preliminary stage – developing mock-ups and the concept, designing the displays, and writing texts – took quite a lot of time. Exhibited objects (copies of real artifacts from the Stone Age) were commissioned from flintknappers, professionals who specialize in replicating stone tools. They were created by well-known masters from Russia and abroad. For example, a flint dagger was made in Denmark, and an obsidian sickle – in Armenia.

The first exhibitions took place in a garage on Vasilyevsky Island that Nikolay Sevastyanov rented specially for this purpose. According to him, it was a rehearsal of the upcoming exhibition and a testing of the format. The project team named themselves Museum No. 7 after the number of that garage.

“We have all worked in museums, done an archaeological internship at the Hermitage, and realized that it’s all quite boring. Even the staff at the Hermitage told us: ‘Archaeological objects aren’t very attractive. They’re just not interesting to look at.’ We decided that this is a problem with the presentation, not with the objects. Especially when it comes to Stone Age objects: they are displayed rather bleakly both at the Hermitage and at other international museums. We decided to do it our way, so we rented a garage on Vasilyevsky Island, set up a mini-museum, decorated it, and asked our fellow archaeologists to give lectures,” says Nikolay.

According to Nikolay, the main idea was to give ancient objects a touch of magic and mystery. The project team made a survey among people aged 14-35 and asked them to draw the first thing that comes to mind when they hear “archaeological artifact”. As a result, they saw lots of sketches of floating crystals, swords in stone, red-hot daggers in lava – typical images from fantasy books, video games, and movies. This defined the approach they used in the exhibition.

“We thought that the creators of these fantasy images must have been inspired by real things – archaeological objects. The design of our exhibition encourages visitors to communicate with objects and feel the sensation of touching an artifact, as they were in a fantasy world. It’s a feeling of miracle and mystery that is definitely a thing in archaeology. To put it shortly, we believe that it’s not about the objects, it’s about presentation. These artifacts need help in order to shine,” comments Nikolay.

Other than an unusual way of presentation – each object has its own room and pedestals are decorated by artists and lighting designers – the immersive effect is also achieved through intriguing curatorial texts. Along with general annotations, they include little sketches of Stone Age life, which the authors based on reliable historical sources. All objects are surrounded by decorations that correspond with their purpose or origin.

For example, the obsidian sickle is a copy of an artifact found in Mesoamerica. It was used for harvest and is now decorated by a lighting installation that imitates a field of maize. A Clovis point from North America is displayed on top of an artificial volcano, as obsidian is basically a solidified piece of lava.

Anastasia Direktorenko and Tatyana Korneva, architects and artists, were responsible for implementation of all these ideas. In the process of working on its visual aspect, they used unusual materials. For example, instead of expensive museum partition walls they used boxes painted black, and for lighting installations – ordinary LED lights.

“The DIY format is not the key thing here. It’s more about the way our curators try to communicate with their audience and create an atmosphere by using lighting and music. It’s more of a demonstration of the fact that if you really want to, you can create a cultural project without funding and support of major cultural institutions. The clever use of materials proves that the exhibition could be even more impressive if it received external support,” says Ekaterina Loginova.

Even though the project wasn’t funded by museums and government institutions, it has attracted quite a lot of attention: ANTROPOGENEZ.RU, one of the biggest popular science portals in Russia, published an article about it and the Two Tracks studio created a series of audio guide podcasts for free.

Lecturers from St. Petersburg State University and researchers from the RAS Institute for the History of Material Culture contributed to the educational program that supplements the exhibition. An animated film created by the project team together with historians of the Stone Age has attracted the attention of universities: it will be screened for archaeology students at Ural Federal University.

Museum No. 7 has several more concepts up their sleeve. They are preparing for an upcoming exhibition at the Military­-Historical Museum of Artillery, Engineer and Signal Corps. The team plans to work with other objects that are hard to display, such as paleontological artifacts. At the same time, the organizers don’t aim to bring science to masses, they just want to show how fascinating and amazing it can be.

“It’s hard to measure the efficiency of popular science exhibitions. In order to determine whether the visitors have learned something, we would need to assess their knowledge before and after they visited an exhibition. I think the important thing about our project is not that it’s popularizing science, but that the team had enough courage to showcase archaeology in an unconventional way by taking ancient stone artifacts down from dusty museum shelves,” concludes Ekaterina Loginova.

The Stones of Ancestors exhibition is open from 10.30 to 19.30 until November 22 at the A.S. Popov Central Museum of Communications, Pochtamtskiy Ln. 4.