Breaking the Language Barrier: Which Teaching Practices Are the Most Effective?

“Challenges? We love them.” This provocative motto titled the poster stand, which Olga Aleksandrova and Daria Sevzikhanova, experts of Foreign Language Training Center (FLTC) of ITMO University, presented at an educational conference in Moscow. The specialist came to the National University of Science and Technology MISiS so as to share modern English language teaching methods used by ITMO`s tutors. 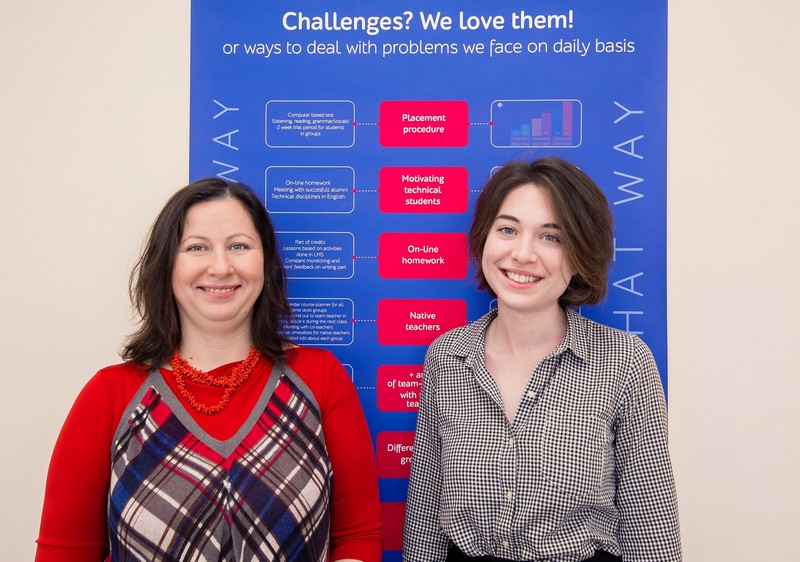 The experts presented a poster with modern techniques of English language teaching used by ITMO University`s tutors. According to Ms. Alexandrova and Ms. Sevzikhanova, such methods as communicative and creative-oriented are the most effective ways of breaking the language barrier. Usually students are afraid of making mistakes. ITMO University`s experts solve this problem by setting a trend in trust-based relations between teacher and students.

The examinations at ITMO University are provided by online tests. Despite of the fact that about 1, 500 Bachelor students study English the experts of Foreign Language Training Center focus on the individual approach.

“I think it is the keystone of success. If a teacher considers students as just a mass or group of people he will never involve them into the educational process. The personal-oriented approach that we use includes such required elements as getting acquaintance and so-called trial period. It means that students try to attend English classes with different levels in order to understand which of them is more appropriate. Having chosen a group a student follows classes within it for two and a half years. However after the first year the most talented of them can be enrolled to a group with higher level.” said Olga Aleksandrova.

To evaluate their opportunities students pass a test. However it is not enough because some students are good in a grammar but have no enough experience in spoken English and vice versa. That is why the trial period doesn`t include reading and doing exercises. Students focus on speaking practice whereby tutors to define their level.

According to Ms. Alexandrova, during three terms students study English language having four classes per week. Then they choose extra class such as IT or Engineering English. Six months later they start follow academic writing course, graduating from which students have to write any part of their term papers, for instance, introduction  or review in English.

“Answering test questions they can check out which of their answers are correct. A home work also includes essay part, which looks like a blog through which tutors read assignments written by students and correct the mistakes,” noted Olga Aleksandrova.

Thus each ITMO University student can improve his or her English skills. One just has to embrace all opportunities offered by the University!

The experts of Foreign Language Training Center pay the great attention to pronunciation. Not long ago they took part in the workshop led by a specialist in phonetics, who presented techniques of correct articulation and effective phonetic exercises.

“Many lecturers will have to give classes in English. Furthermore currently knowledge of English is very useful skill,” underlined Ms. Sevzikhanova.

According to FLTC`s experts, most of ITMO University`s professors and lecturers speak English well. It helps them to make contacts with international partners and colleagues, publish their articles in leading academic journals and promote the University at the international educational arena.