This Is (Not) Art: Insights into the Origins of Art, Its Connection to Science and the Makings of a Masterpiece

Nina Gavrish, a prominent art historian, has recently gave an open lecture in St. Petersburg. An educational programs coordinator and researcher at the Museum of the Russian Academy of Arts in St. Petersburg, in This Is (Not) Art Nina Gavrish moots the open-for-debate questions on the definition of art and what can be considered as civilizational legacy and world-class chefs-d’œuvre. The lecture was followed by a discussion on contemporary art and its new genres, including Science Art. ITMO.NEWS put down the keynotes. 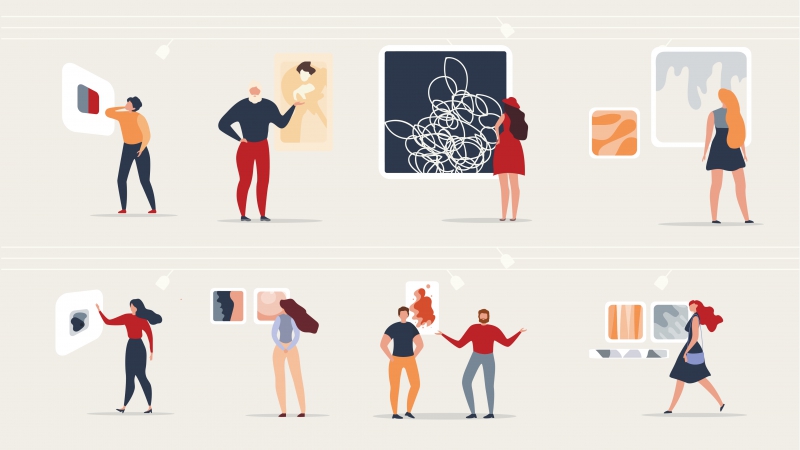 Nina Gavrish began her presentation with a remark that there’s no clear-cut definition of art. Or, in other words, there are sundry definitions out there, but none of them can claim universality. What can be used to describe antique statues and Roman mosaics cannot explain contemporary art objects.

“What is art and who needs it? Animals don’t need it, but for some reason, cave people did. If we consider art in the contemporary sense of the word, it’s completely unclear how humans, whose intrinsic, existential goal is just to survive, could have created non-utilitarian art. Science speak of this case as that of reflection, positing that art is first and foremost a tool for cognizing the world around us. This is perhaps the only definition of the word “art” that has the potential to become universal,” says the researcher.

A brief guide to the art of the ancient world

There are currently three hypotheses that attempt to explain the rationale behind the emergence of cave art.

The magic hypothesis: humans depicted dead and captured animals ahead of a hunt to attract what they wanted.

The social hypothesis: humans left paintings not in the caves where they lived, but where they gathered together with other members of their tribe.

The paleopsychology hypothesis: humans were so frightened and emotionally weighed down after a hunt that they needed an outlet to pour their feelings into, and because they couldn’t talk they took to drawing pictures.

But none of these hypotheses have so far found confirmation, and most importantly, none of them serve the high purposes of art. Ritual, communication and emotional release is just about everything people make of prehistoric art today.

But did art ever exist purely for the sake of aesthetic pleasure? Or was it ourselves that floated the concept of a linear history of art that merges together motley artifacts from different eras?

The answer hides in the very origin of the terms “art”, “techne” and “artistry”. All of these refer to the concepts of “craft”, “skill”. Is a well-made horseshoe also an art? It can be surprising, but only a few centuries ago this issue wasn’t nowhere near contentious.

In Ancient Egypt, the pharaohs’ tombs and sculptural depictions weren’t considered as objects of creative thought and activity: there served a very pragmatic purpose. The Egyptians dreamed of enshrining their names in eternity, and used all means available to achieve this goal. The Antiquity was fixated on decoration, the Middle Ages on worship, and the eras that followed on stone-cold commerce.

“Let’s look at the works of the so-called Small Dutch Masters at the Hermitage Museum. Why are these so miniscule in size? The answer is simple: back then, a small picture was easier to sell. We shouldn’t forget that the history of art always had a commercial tinge to it,” explains Nina Gavrish.

But in no way does it all posit that artistic works didn’t elicit any enjoyment or aesthetic pleasure. Saying that, the first public museums in the modern sense of the word only emerged in the first half of the 18th century, and it was students and scientists that formed the majority of their audience.

The close ties between science and fine arts date back to the Renaissance era, when artists turned to Antiquity and the ancient Greek concept of “mimesis”, meaning “imitation of nature”. Realism directs creators to the study of anatomy and physics in order to convey, as accurately as possible, the similarity of a picture with the original that inspired it. According to Nina Gavrish, the second wave of the increased interest in science arose at the turn of the 19th and 20th centuries.

“Science entered into a special relationship with art back in the era of Enlightenment, and it was at the beginning of the last century that new discoveries even served as a starting point for such revolutionary and avant-garde movements as Dadaism. Dadaists were the first to use collages in their works, which at that time was a unique, groundbreaking practice. Surrealists were another movement to draw inspiration from science in the first half of the 20th century. They often portrayed cyborgs that incorporated biological and technical elements,” notes the lecturer.

Nowadays, this tandem of science and art has already established itself as a separate genre: that of Science Art. It unites artists who create pictures using cutting-edge technologies and artificial intelligence, and, vice versa, scientists who apply artistic means and concepts in their experiments and research.

French for “chief work”, the term “chef-d’œuvre”, or “masterpiece”, initially referred to a piece of work produced by an apprentice aspiring to become a master craftsperson in the old European guild system.

Today, we use this word to describe outstanding paintings or sculptures. But Nina Gavrish sees this as yet another opportunity for reflection, urging the audience to answer the question of who determines whether a work is a masterpiece or not. The lecturer emphasized that we shouldn’t get too preoccupied with the prestigious moniker, because very often these works acquire special clout due to random circumstances, as in the case of the once-stolen Mona Lisa, or simply because they have a material shell.

“The 21st century gifted humankind with a great deal of wonderful things, but it also stripped the image in a picture of the magical halo it enjoyed in previous eras. It can now be deconstructed to digits, multiplied, animated. This is the reason why material art objects have attracted such a bizarrely significant value; after all, the notorious “Don’t you breathe at the masterpiece!” museum visitors get chastised with does have its roots. But if you really think about it, this is terribly stupid,” opines Nina Gavrish.