Do You Want to Become Invisible?

Invisibility has always been considered as something magical. There are references to invisibility hats, which enable a person to become invisible to those around them. You can find such references in Pushkin’s fairy tale “Ruslan and Ludmila”. The idea of becoming invisible by wearing something, was further extended to the idea of an invisibility cloak which due to the fabric’s “magical” properties can hide a person completely. H.G. Wells was the first person to refer to the scientific aspects of invisibility in his novel “The Invisible Man”. The hero, a physicist by the name of Griffith, decolourized his blood with the help of a drug he invented. Now, thanks to science, the ability to make an object invisible to human eyes is no longer just a story-book fantasy. Although, scientists at this point are more focused on learning about materials rather than biology. This is a detailed description of how far scientists have come in their research on invisibility, in the world, and in ITMO university, and how to make objects invisible. 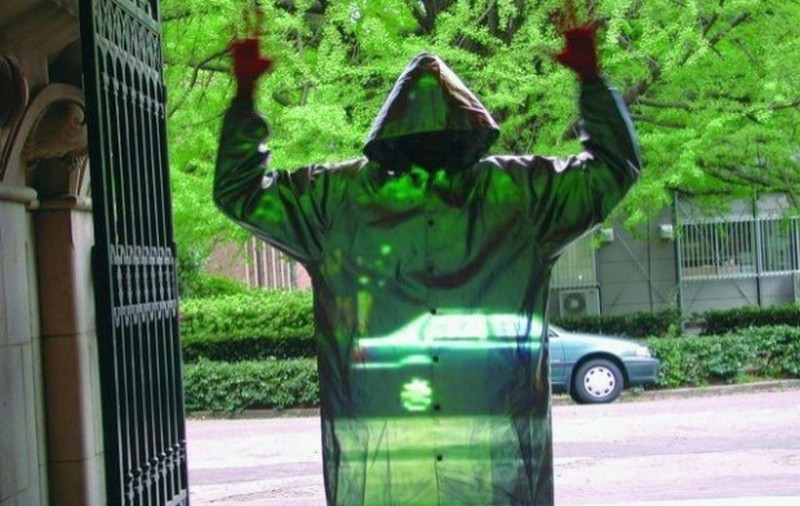 If we define an “invisible object” simply as “an object we don’t see”, without digging deep into details and nuances, then we can start with an example from nature (or wildlife) – the principle of camouflage, which helps predators hunt their prey, and the prey to escape death. Mimicry is the most well-known version of this, where the colour of the animal blends into its natural habitat. Arctic animals and birds often have white fur and feathers, and in the desert, the animals are a range of colours on the “sand” spectrum. This trick is used by military around the world by using camouflage fabric for their uniform. Some animals of the world have mastered mimicry to such an extent that, for example, the African praying mantis (or Phyllocrania paradoxa) is very difficult to distinguish from a dry leaf, and its counterpart Hymenopus coronatus, which dwells in India and Indonesia, is the colour of an orchid.

There are more sophisticated versions of mimicry, such as the chameleon or octopus. Many researchers are attempting to emulate this concept and create an adaptive camouflage. For example, scientists from Professor Susumu Tachi’s laboratory in Tokyo University have created their own version of the invisibility cloak on the basis of retroreflective projection technology.  They succeeded in achieving the "invisibility" effect by filming what is happening behind the person in the cloak and projected onto the special fabric. A similar idea was used by Simon Pegg and Tom Cruise in “Mission Impossible: Ghost Protocol”, although the writers, of course, did not limit their imagination to actually existing technologies.

From Zoology to Physics

There are many more examples of how objects imitate their background, but none of them are close to “true” invisibility. To really hide an object from prying eyes, it is necessary that it neither absorbs nor reflects light.

To hide something from technical devices is relatively easy, although these solutions have many limitations: stealth (undetectable) military technology is based on the idea that the radar station will emit a ray which will be reflected in different direction and not back to the receiver. To deceive sight is more difficult because the eye doesn’t emit anything but only detects light, and, if some kind of object will not reflect anything, it won’t make it invisible, instead there would just be a black space. Therefore it is necessary to make the electromagnetic wave pass through the object without distortion.  For this to work, it is necessary that its optical properties were identical to those of air, and this is not yet possible.  Another solution would be to make the waves go around the object.

Vladimir Borisov, a Masters student from the Chair of Photonics and Optical Information Technologies, and Secretary of the Student Optical society of ITMO University, said that the problem is solvable. What is required is to place the object – for example, a ball, inside a bigger ball made of a material with the same refractive index, so that the incident wave would bend around the object, and then continue in that direction. Theoretically this can be implemented in two ways. The first method involves the use of metamaterials – these are a special class of materials. Their properties are defined by their structure and not the substance they are made from. Scientists can create materials with surprising characteristics which are not found in nature – such as possessing a negative refractive index. To understand what this looks like, imagine the following experiment, a glass is filled with liquid, the optical properties of which are the same as water, except that the refractive index is negative (n=-1.33). If you place a stick into the glass, it will look like there are two different sticks, one which is above and one which is below the surface of the liquid since the ends will be pointing in different directions. In order to change the refractive index of a material, it’s possible to “dilute” its structure with another substance.

For starters, you can create a hexagonal mesh (honeycomb) structure, the dimensions of which are comparable to the length of an incident wave. If we drill a hole in each of the hexagons, then the light will be perceived as one and something homogenous and the refractive index of the material decreases. This method is used by researchers from North Carolina, they have created a dielectric film, with similar optical properties to air and published their research results in the Advanced Functional Materials journal.

“The structure doesn’t necessarily have to be hexagonal: the shape of the structural units can be more intricate. However, this is the simplest form of a polygon since it will have the minimum distance between the centers. This is why such patterns, for example, a honeycomb is often encountered in nature. This method, is simple enough to execute up to a certain point, there is a video on the internet, which camouflages a man using microwave radiation. The waves bend around the pipe in which it is located. But there is one problem: the experiment is difficult to repeat in the optical frequency range, because the wavelength in the visible spectrum is only 400 to 800 nanometers. The space will need to be filled with very small hexagons, in which many holes need to be drilled". - says Vladimir Borisov

Scientists from the University of California at Berkeley, have already created an invisibility cloak on the basis of metamaterials made of gold nanoantennas that hides three-dimensional objects in the infrared range. However, they have only managed to make an object with an area of 1,300 square microns invisible. The results of the experiment are published in the Science journal.

Another method is related to the use of light-sensitive media – these are materials change their properties in response to external stimuli, most often properties such as the refractive index and absorption.

"We can just take a piece of material, heat it up or cool it, and after – illuminate it so that the refractive index changes exactly as we want.  I'm working on creating a base for the implementation of this approach, but I will not elaborate further now on this subject as my Science Slam ITMO University presentation will be based on this. In this field we are still at the foundational research stage, and practical experiments are still quite far away." shared Vladimir Borisov.

Vladimir Borisov explains further that even if scientists could create an invisibility cloak, in which waves would bend around a massive object, and completely get rid of optical distortions. It will not happen overnight. First, due to the fact that the light bending around the object has to travel a little further and so the background behind the invisible person will be visible a little further than expected.

"Invisibility would be most useful in the defense industry. Protecting an object from waves of a particular length is necessary for the military, so that with their wavefront nothing unusual would take place. At this point, computers do not know how to recognize these defects and will be unlikely able to do this in the near future. Today many scientists are trying to model the behaviour of lights in materials, there is a huge math and physics package with the help of which we can see how waves can bend around an object, regardless of the wavefront.  The human eye is not a very reliable receptor, it doesn’t register all physical quantities that are inherent in the electromagnetic wave.  Therefore, the main tool for all physicists, who deal with issues of invisibility, are these software packages." explained Vladimir Borisov.

We will add that a “real” invisibility cloak, which causes light waves to bend around the object has apparently already been created. The Canadian company Hyperstealth Biotechnology, specializing in the camouflage manufacture, published an article stating that their Quantum Stealth technology can hide an object in the visible and infrared frequency range, to hide its shadow and at the same time does not require power sources, cameras and mirrors. The invisibility cloak is lightweight and is inexpensive. However, according to the company, the technology is so secret that they can't publish any details about the development, or even photos of the coat in action.