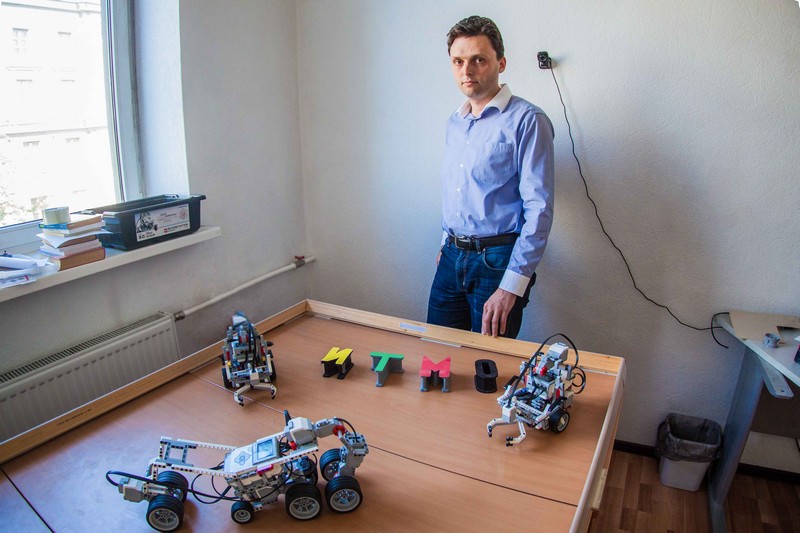 The international laboratory «Intelligent Technologies for Socio-Cyberphysical Systems» works on developing methods, models and technologies for automatization of various processes in socio-cyberphysical systems. Aleksei Kashevnik, a senior research officer of the laboratory, says that one of the current projects has applied for a grant with Horizon 2020 Program. The research is devoted to staff competences management systems. This project has interested a Finnish medical company, which plans to participate in its development.

Besides, at ITEA Event 2016 the ITMO University representative presented some completed research projects in robotics. The developed devices are robots, their sensors and manipulators. For each device there is a separate ontology-oriented model in intellectual space, and the robots interact with each other on the basis of these models. Also, there is a social space: where, in cases that specific tasks cannot be settled automatically, human interference is required.

“Recently we introduced a principle of multilevel self-organization. This has to do with the division of different interacting services, devices and users into several levels and implementation of self-organization on each level separately. As a result, there occurs generation of behavior policy on the higher level, which restricts behavior of the lower-level services. Self-organization on each level is set on the basis of subscription publication mechanism. For instance, there are services that manage sensors and movements of a robot, on the higher level – there are services in charge of operational planning, and on the highest level – there is strategic planning service”, - explains Alexei Kashevnik. The students have built several socio-cyberphysical systems of this kind in the Laboratory with Lego Mindstorms construction sets. The first system is a pair of robots making up an abbreviation “ITMO” out of separate multi-colored letters. Using an App a user attributes a color to each letter and sets the relevant order. The robot finds a letter and transfers the information about its color to the intellectual space; then guided by what it receiveds from higher level, orders it to put the letter into the right place. The other robots get informed automatically about the operation, and won’t touch that letter.

"The interaction of the robots cannot be seen, as it goes through the intellectual space. If one has found the letter “M”, another understands that it doesn’t need to search for it anymore, because the information about it is already in the model. This approach has its advantages: the robots are not managed through a central server, which could get out of order. In our system, even if some of the robots become disabled, others would still complete the task, slower though", - adds Alexei Kashevnik.

Another system built by the students consists of two robots and a load lying nearby. The load should be gathered by the robot standing closer to it. To understand, which one should complete the task, the robots turn around and measure the distance to the objects close to them, and transfer the gained information into the intellectual space. If one of the measurement results match, the robots understand that they have found each other. They compare their distance to the second object identified, and “make a decision” based on this information. There is also another similar system, including two loaders of different types. One of them delivers loads fast, but cannot cover them from the rain, while another, on the contrary, can protect them from the rain, but moves slower. Depending on the type of delivery needed – urgent or not, is it raining or not, - the robots decide which one should complete the task.

Even though now the abovementioned systems work on the basis of Lego Mindstorms construction sets, the same principles can be successfully transferred to industrial machinery. In fact, besides the robotics, the ITMO University laboratory is working on an Android App – a touristic guide TAIS, applicable for any city in the world. The app uses data from Wikipedia, Wikiguide and Panoramio. A user receives a list of sights depending on his or her location, weather, traffic situation, and feedback of other users. “Obviously, the quality of the content depends on editors of these Internet-resources. On the one hand, it might be a weakness, because the description of a small museum might have some incorrect information. But on the other hand, it’s a technology of the future: qualitative elaboration and maintenance of a resource cannot be ensured by an organization and a state. The impact of people might be much more valuable, as proved by the Wikipedia example”, - says Alexei Kashevnikov.

In fact, during a seminar held on 12 May in ITMO University Technopark, the adaptive touristic guide has interested Cyprus University of Technology. The collaboration between scientists of St. Petersburg and Limassol in this respect has a high potential.