Dr. Armando Walter Colombo, professor of University of Applied Sciences Emden/Leer whose field is Cyber-Physical Systems came to ITMO University to give an intensive course in development of these systems for industrial purposes. 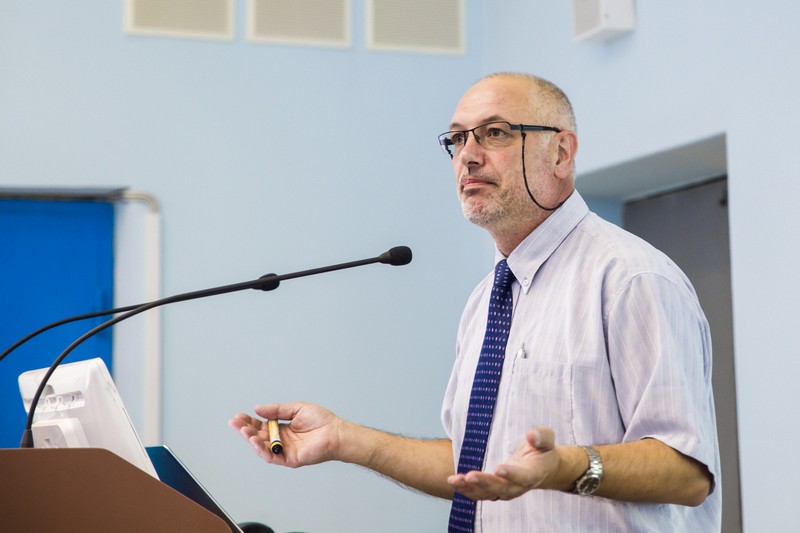 Dr. Armando Walter Colombo is a well-known European expert in industrial cloud-based cyber-physical systems. He works as a professor at University of Applied Sciences Emden/Leer and as a senior expert and a head of joint programs and projects at Schneider Electric. Moreover Dr. Armando Walter Colombo is a visiting professor at universities in Europe and all around the globe.

A week-long series of lectures is devoted to new approaches and technologies applied to modern industrial systems. The lectures were prepared with the assistance of Anon Pyrkin, the head of Department of Control Systems and Industrial Robotics. During the lectures the students are to learn about the peculiarities of industrial processes at leading European and world`s enterprises that follow “Industry 4.0” strategy. During the first lecture, which took place on August 29, Dr. Colombo talked about how production methods were changing alongside the industrial development. He gave an example of industrial revolutions as steam power and electric engines affected the world. Currently mass production doesn’t meet the requirements of modern industries. To develop flexible and mobile information and communications industrial systems, one needs to organize seamless interaction between engines and control systems.

“Every industrial revolution was caused by industrial novelties. Consequently these revolutions provoked changes in other areas. If you try looking for a picture illustrating an industrial revolution, that’d be a steam engine for the first and an electric – for the second. After the third revolution an operator became more than a “communicator” for a machine – he has joined the industrial process. As for now, we live in a very interesting period when everyone has a handset or a tablet. It means that each person has information and communication interface. Men-machine interactions have become real, so to make it operate correctly we have to use the appropriate data model and also speak one language,” said the professor.

The forthcoming lectures will be centered around the digitalization of economics, education and social sphere.