Relativity Theory in Layman’s Terms: a New Lecture at the «Gutenberg's Lounge»

What secrets do dice hold, and why it's better to pass each medical examination twice? Anton Antonov, a computational methods specialists shared on these subjects during the recent meeting at the recent lecture of the «Gutenberg Lounge» sci-pop project. 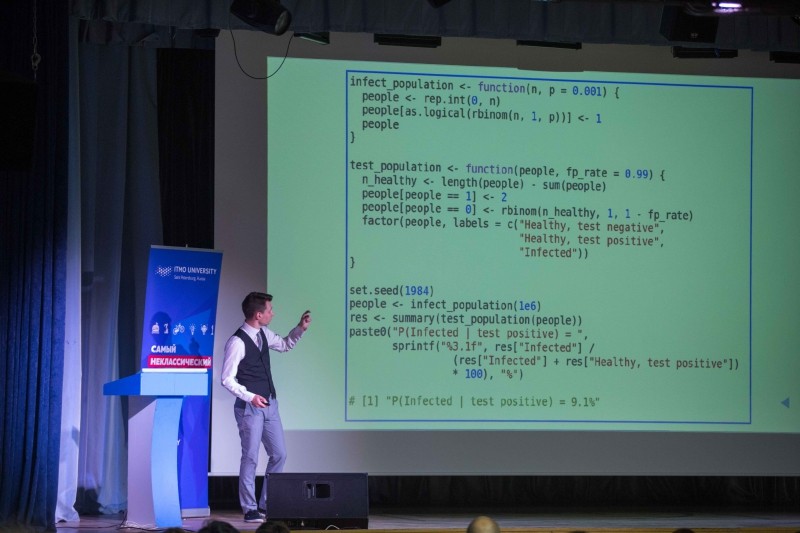 When they invited me to read a lecture, the first thing I did was opening YouTube and browsing through the videos from the «Gutenberg's Lounge». For the last last year, there were 13 lectures in history, 13 in biology, 12 were related to space. There were also lectures on literature and philosophy, psychology, physics, chemistry, economics — and none on mathematics.

Why does that happen? Mathematics is too abstract. The explanation of one of the simplest concepts of mathematical analysis, the limit of functions, looks really complex in formal language — though we've all got in school when it was explained to us in layman's terms. So the problem for anyone who wants to talk about mathematics is how to do it, how to explain, give comprehensible examples, how to motivate the audience. Well, I'll try to solve this task while talking about relativity theory.

The central concept of the relativity theory is random variable. Just try to imagine a dice: it's something mankind invented about 5,000 years ago, between the wheel and writing. When talking of the dice as a random variable, we imply that it has six faces, each is inscribed with a number from 1 to 6, and there are no other options. The second component is probability distribution, in our case the probability of getting each face is 1/6. Here, probabilities are equal, though in most cases it's different. The only condition that's to be met is that the probabilities should not be negative, and their sum has to be 1.

Once we have the reference set, we can work with different possible events. For instance, we have the X event with an odd number of points. That'd be outcomes 1, 3 and 5, and the probability will be 3/6, or ½. Another example — the Y event: the amount of points is strictly more than 3. Then we're ok with points 4, 5 and 6, and the probabilities of X and Y events are equal. Now we can work with combinations of events. If events X and Y coincided, it means an odd number strictly more than 3, — that will be 5, and the probability will be 1/6. When working with such simple connections and space of events, it seems hard to make an error. Still, it's possible.

When I studied on the Military Department (and that's some unique experience — part fun, part humiliation), our lecturers decided to give some maths — something from the Game Theory. The task was the following: There is a tank that moves on our positions. We have two cannons, each has one shot, both fire simultaneously. We consider the tank destroyed if at least one of the shots hit, and as it's quite close the probability of a shot hitting the tank is 0.8. The lecturer explained as follows: you are all mathematicians here, so you know that the probability will be 0.8 + 0.8. Then he calculated it, got a result exceeding 1, got a bit embarrassed and concluded: «Well, that means it's totally done for».

What was his mistake? If we represent the probability space as a square, we'll have 4 possible outcomes: A — the tank is hit two times, B — the tank is hit only by the first cannon, C — vice versa, and D — both cannons missed. By summing 0.8 + 0.8, the lecturer summed probabilities AB and AC, so he counted the A outcome twice. By subtracting 0.82, we get the right answer — 0.96, or 96%. There is even a simpler way to solve this task: as we need the sum of A, B and C, all we have to do is to subtract 0.22 from 1.

In some tasks, presenting the probability space is much harder. For example, we throw not a single dice, but a hundred of them, and work with the sum on them all. The minimal value will be 100, if each rolled 1, maximal — 600. Let's say we want to know the probability of this sum being from 350 to 500. If we'd use a chart to represent the probability space, its size will be 6 (for one dice) * 6 (for another) and so on for each of them — for a hundred times. That's about 10 raised to 78th power, which is near 1/100 of all elementary particles in the observable universe. I surely won't fit into a presentation slide. Still, we can write a simple program on any computer or smartphone, run it a million times using a simple code and calculate the proportion of sums that we seek — the probability will be around 51.2%. This is called the Monte Carlo method. It was created during the Second World War, but was classified for some time, so the first publications were around 1949; after the war it was used for nuclear research in design of safe reactors.

In 1978, a study was conducted among medical staff. They were presented with a following problem: there is a rare disease that affects only 1 in a thousand. There is a test with a 99% accuracy. We take any passer-by and get a positive result. What is the possibility that he actually has the disease? Tabular integration of a function using the Monte Carlo method

The answer being 99% would be too simple, won’t it? To get the right answer, we have to consider different events. Event A — the patient is sick. Event B — the test is positive, and event C — negative. So, we need to find the probability of event A happening under the conditions of event B — so we take only those people who answer the B category. There are two possible options of this happening: one is that he's really sick and the other is when he's healthy but got wrong results, so that'll be 0.001 (one sick out of thousand) + 0.999 * 0.1 (wrong results). Then the probability will be 0.001/(0.001+0.999*0.01) which is approximately 9.1%. Let's try to understand, what really happened: we had quite an accurate test but the probability of the patient being really sick is below 10%.

These are the results we just calculated. Let's check them using the Monte Carlo method. We take a million people and infect each 1000th, then run the tests and look who got into which category. The results for a million subjects will similar. To raise the accuracy of the test, let's make a control one; then, the probability of one being really sick will increase to 91%.

As you see, relativities can be misleading at times. So be sure to be accurate when you have to deal with some real problems that concern everyone — I'm not talking about some abstract things but those like medical and financial risks. And if you are not sure — you always have the Monte Carlo method.