How do humans fare in isolation, why do some believe in the supernatural or even see faces on the surface of Mars? Why does one need to understand the theory of relativity and what is a neurotheatre? The Geek Picnic festival has come to an end. Thousands of guests had the opportunity to attend dozens of venues, hear stories and news from the fields of science, gaming and technology and meet famous scientists and science writers, program their own chameleon-lamp and build a custom rocket. Read on to find out more about the things one could see, hear, taste and touch on the festival’s closing day. 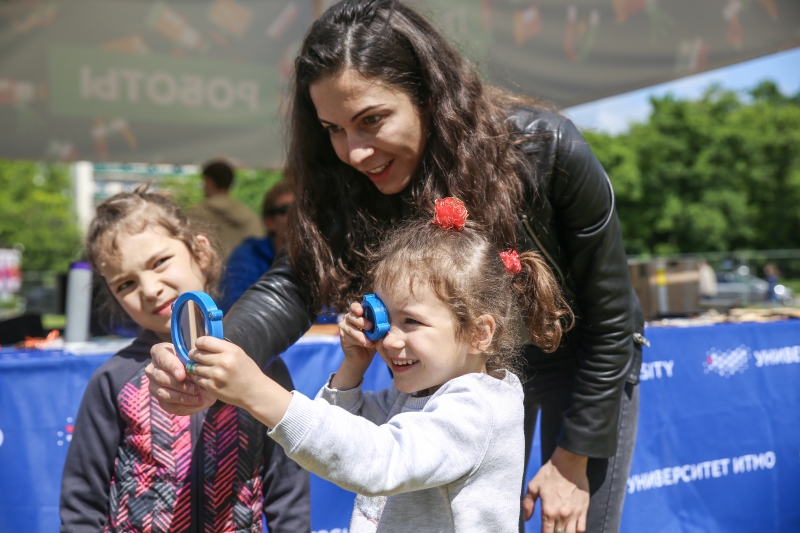 What would happen if you were to be completely isolated from the outside world? Imagine saying goodbye to your gadgets, your lifestyle and simply went back to basics. What will happen to your body, your brain, your behavior? How will you adapt to this new environment? To find the answer to these questions, you don’t need to actually test this on yourself – just learn from Australia’s example, says Evgeniya Timonova – a natural scientist, creator and host of the web-show “Just Like Other Animals”. Marsupials, poisonous and venomous animals, wingless birds, tough reptiles, killing toxins, vicious jaws, dangerous migrants and other fascinating results of the Earth’s biggest experiment called “Australia”. There, on a continent isolated from the rest of the world for almost a hundred million years, the strangest animals possess the strangest evolutionary traits.

The extended isolation made Australia’s animals frugal in regards to food and drink. For instance, koalas, who are monophagous animals and subsists only on eucalyptus leaves, are forced to conserve as much energy as possible, a condition which, for example, made their brains smaller in size, explains Ms. Timonova. The isolation had an effect on the aboriginal population of Australia, too, who are assumed to have migrated there 45 to 60 thousand years ago.

“Australia’s first people were actually at the vanguard of humanity, in a way. They were among the first peoples to leave East Africa and explore the world around them, which got them quite far. But being isolated from the rest of the world made them into a sort of a civilization reserve,” – explains Evgeniya Timonova – “If we were to exclude ourselves from the rest of civilization, then in a few million years we will, too, stop being an advance force and become this reserve, keepers of some forgotten knowledge. Maybe others will merge with brain interfaces, become a single collective mind, while our group will still exist as separate minds, old-school style. Each of us will be an individual, but still much more primitive than the new society. And that society will look at us with mixed feelings: on one hand, we’d be silly and cartoonish; on the other, we’d be an example of some ancient existence that they lost a long time ago. This is how evolution tends to work. In Australia’s example, we can witness how it happens and even make some conclusions for ourselves”. One can learn more about why Australia is so strange and the lives of wombats, echidnas and bandicoots on the YouTube channel “Just Like Other Animals”. Or you can see it for yourself by going on a trip with Nikolay Drozdov and Ms. Timonova this August. The trip from Darwin to Uluru will last 11 days – from August 19 to 29.

Why are people so prone to hearing voices where there aren’t any? Can scientists make a mistake and accidentally discover that rats are “telepathic”? Alexander Panchin, a science journalist, writer and senior research associate at the RAS Institute of Communication Problems, explained how illusionists fool their audiences, what apophenia is and why some are drawn to the supernatural while others aren’t. Even a serious experiment, if conducted carelessly, can lead to a “paranormal” discovery. This happened, for example, to the group of scientists who once attempted to analyze the changes in rats’ appetite in various factors. First, the researchers put two of the animals into a cage. Then they separated them and put one into a control group and the other into the experimental group. The animals were not in contact and could not see nor hear each other. Then, the first group was starved while the second was put under observation to see how much they would eat. It turned out that the starved rat’s companion ate twice as much as if the hunger was relayed telepathically.

“The researchers’ excitement died down when a mathematician wrote to them to propose putting a numbered label on each of the rats and using a random number generator to determine which rats should be put into the cage and which of them should then be sent to the first or the second group. Randomization helps prevent a researcher from personally influencing the conditions of an experiment. Thus, when the experiment was repeated using randomization, the “telepathy” was gone. After several repeat testings, the scientists admitted their error. So even honest scientists trying their best to be objective can still make mistakes,” – explains Mr. Panchin.

Some are prone to seeing telepathy when it isn’t there, while some see faces in objects and hear voices in white noise. Such phenomena are referred to as “apophenia” (greek for “make appear, display”), a term coined by German psychiatrist Klaus Conrad to describe a condition in which a patient perceives connections and meaning between unrelated objects. Swiss psychologist Peter Brugger introduced the term to the English language in 2001. He explains apophenia as a result of imperfection in human consciences, a “tendency to find order in random patterns” and a “confusion perceived as epiphany”.

Such “discoveries” are often reported by various websites and TV channels. Just think how many times you’ve heard about someone finally finding the Loch Ness monster (which turns out to be a waterlogged stick) or seen blurry photos of the abominable snowman. A great variety of similar “findings” has been made regarding the surface of Mars. Vitaly Egorov, space exploration activist, founder of the “Outer Space” project and a well-known blogger under the alias of zelenyikot, gave a talk about such “discoveries” in the Technology section of the festival.

A bison, dinosaur remains, alien soldiers, faces and a First World War-era landmine have been found on Mars rover images with help of people’s imagination. In fact, what might first seem like a dinosaur skull or a statue is, when seen from a different angle or lighting, turns out to be just what it is – a rock.

“In a day, a Mars rover takes anywhere from 100 to 200 photos. It’s highly likely that the same object will be photographed several times in different conditions. If you take two photos and compare them, you’d see that the same structure can look very differently due to lighting and angles,” – says Mr. Egorov.

The path of the Levelord: Doom, Quake and Duke Nukem

Gaming enthusiasts, too, had something to look forward to in the Technology section. Here they could attend a meeting with Richard Gray, a game designer better known as Levelord. Having served in the Navy and worked as a software engineer in the aerospace industry, he became interested in game development in the mid-90s. He first sent a set of levels he made for Doom to the head of id Software, Jay Wilbur in 1994, back when, as he says “E-mail” was written with a capital letter. He later worked at 3D Realms where he designed levels for Duke Nukem 3D and the Quake series. He is credited with introducing the “islands in space” and “rat-size” level designs to the gaming culture. Gray is also famous for placing “easter eggs” in hard-to-reach spots of his levels. For the past four years Levelord has been living in Moscow, although he himself admits that his Russian is still rather weak.

Theory of relativity and the neurotheatre

Vladimir Borisov, postgraduate student at ITMO University’s Department of Photonic and Optical Information Technologies, visited the Technology section to talk about the theory of relativity.

“The theory of relativity is not as complex as it might seem. Even in Feynman’s works, who talks at length about this topic, it only takes up two and a half chapters. There’s simply nothing complex in it from the standpoint of pure logic; it’s based on one simple statement that had already been made in the 16th century. The main difficulty is understanding how it works in the most extreme cases. And that’s where it gets interesting,” – says Mr. Borisov.

For example: how, in accordance with the theory, can reaching a certain speed slow down time? How does the weight of an object increase when that speed is achieved? What happens to distance? To understand how the scientific community came to realize that laws of physics can’t be understood intuitively, Borisov joined the audience in going through the history of relativity problematics, starting with aether and fine-tuning and ending with Einstein’s virtual experiments.

Those who like a more interactive approach could visit ITMO University’s area at the festival grounds. There, they could attend an Arduino workshop by ITMO’s FabLab and build and program their own chameleon lamp. The younger attendants tried to conquer Earth, fly a shuttle to Mars and build a rocket, all as part of a quest organized by OLIMP Laboratory and the “MIR” Center. The quest’s zones – control, electronics, programming and creativity – familiarized the players with the basics of robotics. Each successful task was rewarded with a rocket part. Those who did best, went home with a complete model rocketship.

ITMO’s area also hosted an audio-visual performance by NEU-theatre – an experimental project in the new genre of “neurotheatre”, created by Russian media-artist Yury Didevich in collaboration with dancing group STAGE DFT and ITMO University’s Higher School of Lighting Design. This project is an example of the emerging trend of Art&Science – a symbiosis of sciences and arts.

The performance is created through use of neural interfaces the dancers wear – the devices analyze their emotions and relay them through music, light, sound and rhythm. According to Didevich, the idea of taking an actor’s emotional state and translating it to the audience directly from their brain has been around for a century. But only now does the availability of neural interfaces and their ease of use let neurotheatre realize its potential.

On the festival’s closing day, visitors to ITMO University’s area at the festival could try cryogenic ice-cream, see St. Petersburg from a bird’s eye view, take a virtual museum tour and draw 3D-paintings using a VR helmet, among other things. You can read about the festival’s first day here.