A Solar Lab: What Mysteries are Hidden in the Sun?

The Sun is the largest astrophysical lab and when we study itwe can understand how stars and objects in space live. In his lecture Dr. Alexei Pevtsov, a researcher at the National Observatory of the USA, talked about the benefits and threats brought by the Sun. The lecture took place at the Pulkovo Astronomical Observatory. 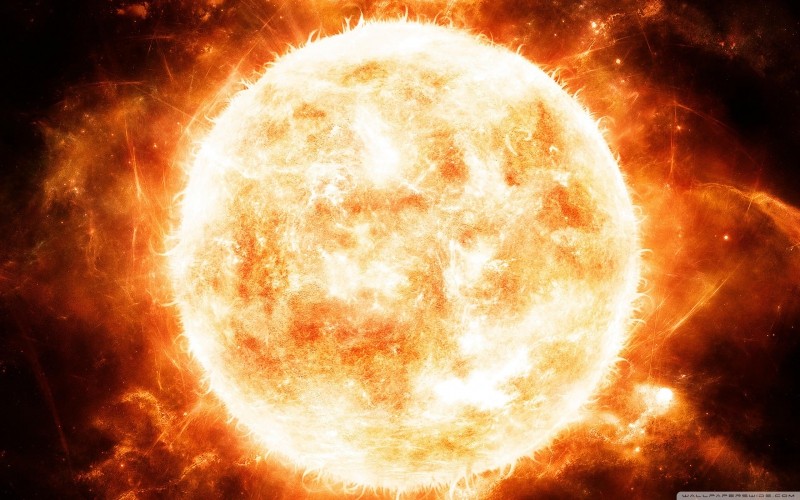 When moving from the Sun’s center to its surface the temperature gets higher and higher. The lower layer of the Sun’s surface is called the photosphere, which covers the chromosphere. Thanks to hydrogen’s ionization, the chromosphere is reddish. The next layer is the Corona. The heat source is in the middle of the Sun, its temperature is over 5, 000 C. However Corona’s temperature is about several million degrees. Studying the Corona’s structure in details is possible only during total solar eclipse.

Sunspots are phenomena on the photosphere. They are possible to research because the Sun is closer to the Earth rather than other stars. At close range we can see that the sunspots are surrounded by constantly moving granules. They are usually caused by a process similar to boiling water in a kettle which is called convection. Thus each granule is a convection cell. This process can be explained easily in terms of physics but one needs to take into account that the average size of a spot is six times more than Russia’s territory. Sunspots were discovered in the days of Galileo Galilei. Till now historians are debating about who exactly made this discovery. Henry Schwabe was a scientist who contributed to this field a lot. For over 16 years he was researching sunspots. Then he understood that they are unstable — as of now, we name this phenomena solar activity. There are periods of increased and decreased activities. According to Schwabe’s theory, their duration is about 10−11 years. Later researchers discovered that there are also periods when spots disappear completely. It turned out that "decreasing" periods described by the term "Maunder Minimum" coincided with the periods on the Earth when the temperature was extremely low, for example, Little Ice Age. This is one of the main reasons why we have to analyze how solar activity affects the climate.

Nowadays we can study sunspots in more detail than in previous times. By using telescopes at the geostationary Earth orbit researchers observe how spots emerge on the surface of the Sun. We cannot look at processes under the surface but we know how to model those using geological approaches. While looking for mineral deposits they fire explosions and detect sound waves' speed. Going through layers with different density rates the waves change their speed. Having analyzed these changes geologists develop underground deposit maps. Thanks to seismology one can also understand what happens under the Sun’s surface -it is also called helioseismology and when one deals with stars it is called asteroseismology. Instead of aimed explosion we use convection: when a convection cell appears it provokes a small explosion, which causes a heat wave. By estimating waves we can detect their depth and estimate how a spots' shape changes inside the Sun.

The modern state solar cycle activity is less than the activity in previous times. According to some predictions, today’s activity will continue to reduce. How to look at it?

The observation of solar states is provided with the assistance of ground-based and orbital telescopes. For instance, in 2006 researchers launched the Stereo project consisted of two satellites. They moved along the same orbit as the Earth moves around the Sun — the first one moves the same direction as the Earth and the second moves in the contrary. So their names are A — "ahead" and B — "behind".

The other satellite is a Japanese invention called Hinode. Launched in 2006 it goes along the orbit located in the middle between Earth’s day and night. One of the main satellites is the American Solar Dynamics Observatory which has been working for six years.

Those who are interested in photography can take a picture of a geostationary satellite at the Equator. The only thing you should do is make a "long exposure" shot by leaving a working camera for some time. Thus stars will look like light stripes in the photo while satellites will be like small points. According to the lecturer, he left his camera for three hours on a brick, so a special tripod is unnecessary. In the photos of solar flares one can see plenty of white points that are charged particle of radiation that move to a satellite and affect its electronic systems. The crown constantly releases these particles. Thanks to the magnetic field of the Earth our planet is not affected by them. When the particles penetrate into the magnetic field they start interacting with earth's poles — thanks to this interaction we enjoy one of the most beautiful phenomena, a polar light.

Why is it dangerous?

The polar light also has its disadvantages. There is a phenomena called space weather. It was discovered on September 1, 1859 by Richard Carrington. He loved to observe sunspots. That day using a telescope he saw bright stripes that he had never seen before. It turned out that he witnessed one of the brightest flashes.

Back then there were no hi-tech systems like we have now. The main communication system was telegraph. Each station was based on a battery. Geomagnetic storms could provoke wires' inflaming, as electrical current amplitudes were too high. Sometimes telegraph batteries were switched off but communications continued for many kilometers. It can be easily explained by a physics program taught at high school like the Ampere’s and Faraday’s laws. If we have electric current, it includes a magnetic field but if we have a magnetic field changed it induces current. We have the same process in the atmosphere — the particles caught be the magnetosphere move from one pole to another and create a variable magnetic field that provokes the current at long conductors, for example, transmission lines or a sea. Satellites also give problems. They easily move along low orbits but while magnetic storms electric currents that appear in atmosphere heat satellites as they heat wires. Air expansion leads to the following problem: air rises and reaches satellites. It provokes atmospheric deceleration phenomena. Any driver knows that a car slows down in a deep puddle. The same happens to satellites that lose speed, decline and then burn down. The Skylab space station burnt in the atmosphere earlier than it had to. The work of solar panels can also be affected — according to the best-case scenario electrostatic discharge damages electronic systems, but there were incidents when a computer received their signals and started working, for instance opened telescope or, in the worst case, launch a missile.

We cannot protect ourselves from these phenomena but thanks to modern scientific methods we can predict them. Thus if we know the certain time of the upcoming anomaly we can be prepared for a disaster.