The international team of scientists has developed a graphene matrix, which allows to grow living tissues from stem and cancer cells. According to the scientists, with the matrix it is possible to study reproduction and differentiation of stem cells, growth dynamics of tumors and their potential treatment. Modeling of cells behavior will help in the skin and internal organs restoring. In addition, the matrix conducts electricity that allows to assemble grown nerve cells in neural networks and opens opportunities for Alzheimer's and Parkinson's investigation. The study was published in Scientific Reports. 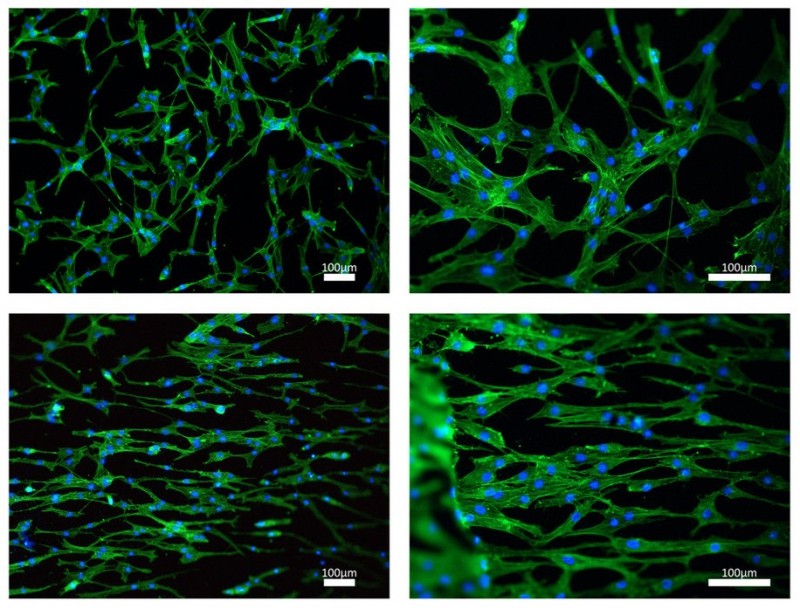 The staff of Tallinn University of Technology and CellIn Technologies company, Estonia, together with Aalto University Foundation, Finland, and ITMO University, Russia, developed 3D scaffolds for growing tissues from stem cells, which imitates natural extracellular environment necessary for cells development. The scaffolds are produced by sputtering a thin graphene layer onto aluminum nanofibers. The scientists showed that it is possible to simulate the behavior of various types of cells, including stem and cancer ones. Thus, the new 3D matrix can be useful in a wide variety of applications such as basic cell biology, drug discovery, tissue engineering, migration and invasion of tumor cells, development of stem cells.

It is known that the cellular behavior can vary depending on methods of cultivation and design of the matrix. Numerous studies showed that the substrate properties, including its surface relief, are very important for cell growth, reproduction and differentiation (a process, when equal cells turn into different types of tissues).

The researchers named the graphene matrix as "GAIN" (Graphene-Augmented Inorganic Nanofibres). In addition to such advantages, as biocompatibility and strength, the hybrid matrix has special nanostructured surface that allows cells to cling to her, and stimulates their growth. The scaffolds provide cell-cell interactions responsible for cell differentiation.

"This hybrid nano-network is unique, as it combines a set of exceptional properties, which was not available before," says Irina Hussainova, leading researcher at Tallinn University of Technology and professor of ITMO University. "The matrix is able to selectively control stimuli for stem cell differentiation, to vary immune reactions and to locally immobilize cancer cells. This opens new prospects for in vitro experiments especially for dermal, neural, cochlear, nephrology, hepatic and other applications, as well as for pharma areas such as Alzheimer, Parkinson and similar drug developments."

Now biotechnologists carry out expensive and long animal testing followed by more expensive and long clinical trials. That is why the environment and conditions for cell growth are very difficult to simulate artificially. However, the new development can solve these problems. The GAIN matrix is a unique substrate, which enables to evaluate cell behavior under controlled conditions. Changing experiment parameters in wide range that was previously unreachable, one can more accurately model and simulate cellular processes. Thus, the scientists showed that the graphene matrix is able to navigate human stem cells in the needed direction. Along with it, the special structure of the substrate (all fibers are parallel to each other) provides not only turning stem cells into nervous ones, but also forms neural networks of them.

"Formation of functional links between neurons is a crucial goal in regenerative therapies, and at the same time — the biggest problem of this field. The graphene scaffolds successfully coped with this challenge and confirmed that they can help treat an injured nervous system," notes Irina Hussainova.

Another application of the 3D matrix was found out during a study of tumor growth. The scientists cultured breast cancer cells on two substrates with horizontal and vertical fiber arrangement. In the samples, there were both intense infiltration of cancer cells into the matrix and forming microscopic bonds and growths that are evidence of local cell immobilization. Thus, the researchers got accurate three-dimensional model of the tumor in the laboratory, which opens new horizons in the field of 3D cancer modeling and therapy.