St. Tatiana Badge of Honor Conferral at the Smolny Cathedral

On January, 25th — the Student's Day in Russia — notable representatives of St. Petersburg universities and chosen citizens were conferred with St. Tatiana's Badges of Honor for their contribution to spiritual and ethical education and social activity. The ceremony was held at the Smolny Cathedral, which has been the "Cathedral of all educational establishments" since 1835. 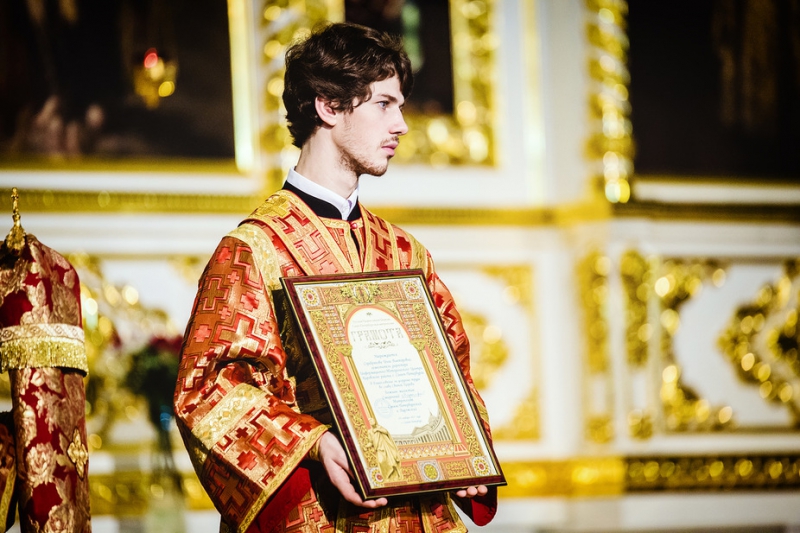 The celebrations at Smolny began with a communion service attended by staff, students and cadets of St. Petersburg's educational establishments and representatives of the city's administration. Vice-governor Vladimir Kirillov congratulated them on behalf of the governor.

"Today, there are more than 300,000 students in St. Petersburg, and our city cares a lot about the development of universities and the system of higher education. And we have to hand it to the students, as they do much in return: by orders of the government, they do projects that are then applied in transport, public utilities sector, and other fields. Every tenth of those who is employed at executive branch agencies is a student. Also, some of the students — namely those from ITMO University — are multiple world's champions in programming. St. Petersburg hopes that each of the students will contribute to the development of our city and the country as a whole", said the vice-governor.

Representatives of St. Petersburg's Council of Rectors, led by ITMO's Rector Vladimir Vasilyev, presented the St. Tatiana Badge's of Honor to students and citizens who've greatly contributed to the city's social development and outreach. Among other honorees was Svetlana Ushakova, a master's student at ITMO's Faculty of Technological Management and Innovations and manager of the Social Design and Entrepreneurship Center and Philipp Kazin, Dean of the Faculty of Technological Management and Innovations, who also got the honorary title "Guide of the Youth". Mr. Kazin shared that the award is a yet another proof of the university's projects in education and social work being really helpful to the students.

"Personally, I see this award as an important symbol of the meaning we put into our work, as it is not only about competencies aimed at bringing success on the educational market, but also about raising up people who understand what they are going to do in life and why. Interrelation of universities, education and spiritual upbringing are most important, and I am grateful to our faculty's and the university's staff that our activities in this field are becoming all the more visible", comments Phillipp Kazin.

We'd like to add that the tradition to celebrate Student's Day on January, 25th — the St. Tatiana's Day — originates from 1775, when Empress Elizabeth founded Moscow University. The holiday became official in 2005.