Egor Zadereev, a PhD in biological sciences and member of Siberian Branch of the Russian Academy of Sciences’ research center, has recently visited St. Petersburg with a lecture “10 Rules of Eco-Friendly Behavior” as part of the Energy of Science project. In his presentation, Egor spoke about the myths existing around the eco-friendly movement and shared simple actions that have the power to help the planet. ITMO.NEWS reports with the keynotes from the event. 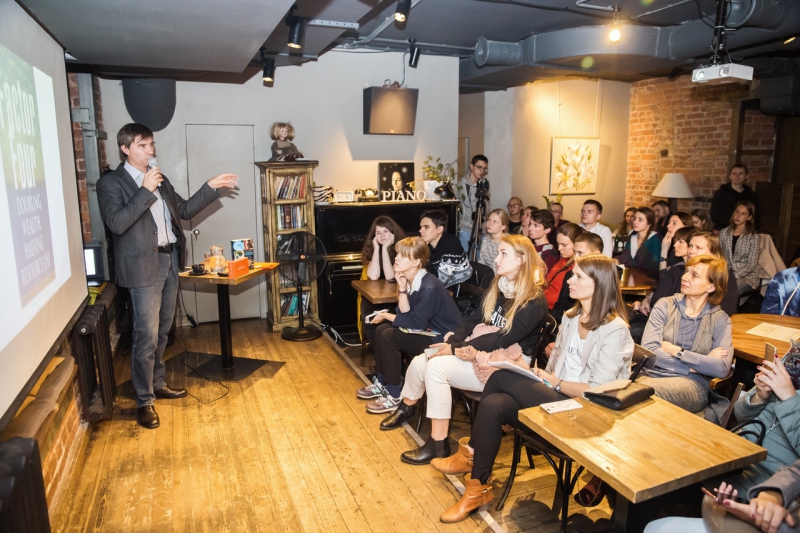 The tragedy of common resources

One of the main myths that stop people on their way to more sustainable behavior is the thought that their contribution would mean nothing. “If I were the only one to not buy a car and commute on bike instead, would something really change? Everyone around is still continuing to do that.” There is a term in science called the tragedy of the commons, in this case, of common resources. Individuals are consumed by greedy attempts to take something that belongs to everyone at once, because of the assumption that otherwise, they’ll get nothing for themselves. Before, up until the beginning of the 2000s, economists were convinced that control over common goods could only be effected either through governmental oversight or privatization. But in 2009, American researcher and Nobel Prize laureate Elinor Ostrom proved that the concept of the tragedy of the commons doesn’t work in small communities as they had been shown to be able to effectively manage shared resources. Her works attest to the fact that no environmental contribution is meaningless, because by assembling into a small group, for example on a basis of a settlement, people are capable of governing common resources in a way that is both effective and sustainable.

Illogical fight for the environment

People sometimes think that they know the perfect recipe for how to care about the planet: manufacture from recycled materials, give up using plastic straws and packaging, stop traveling on planes. But every decision has to be taken on its now and not be lumped in with the general rule. A very important role here belongs to the analysis of a product’s lifecycle, from the moment it’s created to the moment it’s disposed of. As it turns out, it is more eco-friendly to use trees rather than recycled paper when producing white paper: this has a lesser impact on pollution levels. Another example is with petrol-based and electric cars. It seems that electric cars are safer and more sparing to the environment, but in actual fact, the cars that are powered by energy from coal-burning factories cause a bigger harm. Such disconnects should make eco-activist realize that it’s important to analyze a process and study its lifecycle before ruling out on its environmental benefit or harm.

Sometimes the evaluation of one’s own environmental footprint serves as the most sobering factor for those who can’t be bothered about the state of the common goods they enjoy. Now it’s possible to look at the mark your lifestyle leaves on the planet, and also to find out for how many years the planet would last if its inhabitants consumed as much you do. All you need is to fill in a survey responding to questions of how many services and resources you use on a daily basis. Some Earthlings will see that two or three planets are needed to get all the means for keeping their lifestyle going.

Reduce: Reduce your consumption. Saying no to buying things you don’t need doesn’t mean limiting yourself in something. What’s crucial here is the concept of making mindful choices: you have to decide for yourself what you really need and what you could do without. The latter category can include all kinds of things, from wasteful consumption of electricity and water to excessive use of plastic bags and packaging.

Reuse: Use things several times. Modern formats of co-sharing, for example, cars or bikes show that you can get quality services without actually buying the thing in question. Slowly but surely, we’re realizing that we don’t necessarily need three cars per one family for the members to go out somewhere once a day and then leave them gathering dust. There is a viable alternative in the face of co-sharing. It’s simultaneously cheaper and more eco-friendly.

Recycle: Give the things you chuck away a second life. Today, recycling is represented by a progressive movement. Russia doesn’t yet have the infrastructure needed, but there are recycling points out there, as well as volunteers who’ll help you navigate this process as a newcomer.

Buy local and in season

Another important piece of advice for everyone wishing to make their eco contribution is to stop buying produce that is out of season. Fruit, vegetables and other comestibles grown thousands of kilometers away from your home region only multiply the pollution the environment is gripped with. Their cultivation and, especially, their transportation and storage demand huge amounts of resources which could have been left unsquandered had you opted for locally grown tomatoes, berries, mushrooms and other kinds of produce.

Nature has its price

Everything the environment offers, be it clean air, fish you catch in a forest river, or grass in the park, are services we’re not accustomed to paying for. This creates a false assumption that these have no price, that they’re free. But this is not true. In reality, the biosphere has a pricetag of around 150 trillion dollars. This is the money people are ready to pay to see the squirrels in the neighboring park, blue skies out of their window, to be able to swim in the river close to the city. We have to remember that nature carries out an enormous number of tasks and offers us a wide range of services, and not taking care after means that we’re losing our access to these services and are thereby forced to create expensive artificial analogs.

Best kind of help is taking a reasonable approach

The main thing you have to do if you love the planet and want to help it is to take a reasonable approach to the consumption process, turn your critical thinking on. Give buying useless stuff marketing coons lead you to believe you need, opt for the products you really need. Concern yourself with recycling the things you use up, be mindful of the resources you spend.

As ecologists now say, you can help the environment even when using Uber. Change your settings to the minimum distance; this will reduce the taxi path, and hence the gas mileage.