Staff of ITMO University’s eScience Research Institute have developed Russia’s first-ever dynamic urban development simulation. This computer simulation represents the process of a city’s construction and its social life. This allows researchers to predict various scenarios of the city’s development and detect possible issues before they occur, which helps improve the urban environment and better integrate “smart city” systems. The model was showcased at the St. Petersburg International Economic Forum and was presented to Nikolay Nikiforov, Minister of Communications and Mass Media and Georgy Poltavchenko, Governor of St. Petersburg. 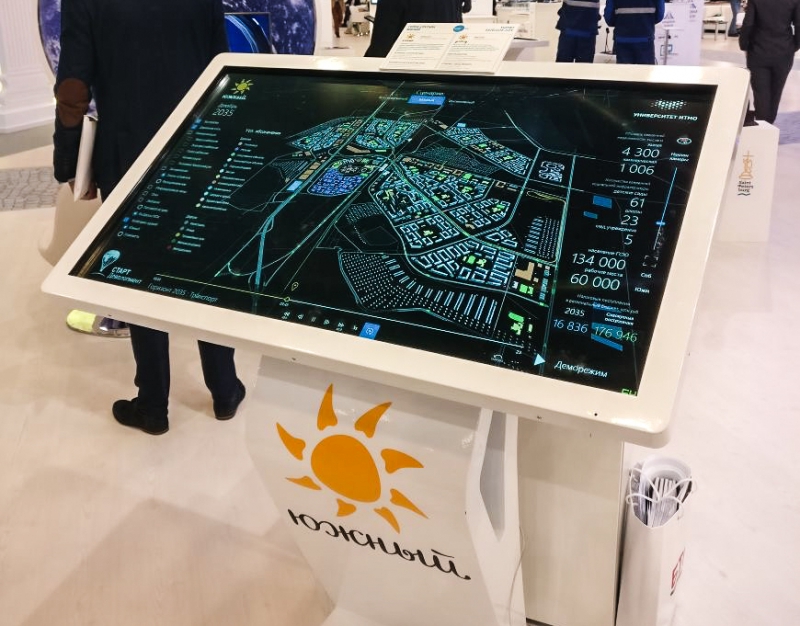 By 2035 the population of satellite-city Yuzhniy will reach 135 thousand; most of them will be working in research and innovation, as it will be the site for ITMO University’s innovation center for science and technology “Highpark Pushkinno”. A full-fledged computer simulation of the city’s development and activities allows authorities to estimate the due dates for completion of various construction projects. The model has also been developed in iterations according to the three development roadmaps.

The simulation shows Yuzhniy in very high detail in both real-time and time-lapse mode. The city can be observed in both 2D and 3D and practically every object can be examined for additional information. The model shows the transport and utility infrastructures as well as the city zones. For each of the milestone points of the city’s development (2021, 2026, 2031 and 2035), additional data was calculated, such as: the population’s transformational mobility in the city itself in relation to St. Peterburg; pedestrian mobility at the commuter hubs and on the premises of ITMO University’s campus; environmental performance – volume of emissions release by transport and the city sprawl’s “heat island”.

The dynamics of pedestrian traffic were calculated using multiagent simulation technology. This approach is used when one needs to simulate the behavior of several agents in an environment that itself depends on the agents’ actions and changes in its surroundings – in this case, the city’s construction. The agents in this model are passengers who move from one part of the city to another. They are described with properties – such as their geographical location and likelihood of taking action – and attributes – such as their speed of movement. In the computer simulation the interaction between agents happens through change of attributes. For instance, if a worker rushing to work is caught by an unpredicted delay of a subway train, their speed attribute changes. An agent’s behavior can also be affected by unexpected (or expected) calls to action. For example, if there are road works in process on the agent’s route to work, they are instructed to change their route to accommodate this. Thus agents try to improve their attributes by choosing the optimal behavior. The computer simulation showcased at SPIEF-2017

“In order to complete this project we used the currently available engineering documentation on the Yuzhniy project and a prior knowledge of the field: parameters and correlations we’ve learned about from data on St. Petersburg and its general area, as well as data from macroeconomic framework of the various development scenarios for Yuzhniy. All this data was used as entry values for the simulation through which we tried to predict the development of the city’s various subsystems. The model employed the intellectual capital acquired by ITMO University over the last three years. This allowed us to radically decrease the completion time for such a model to just two months. Dynamic processes in the urban environment were calculated using supercomputer technology. In addition, in the final software implementation the simulation and visualization are separate processes. All modeling is done on remote servers and visualization can be carried out on any graphics station with a discrete graphics card,” – comments Alexander Boukhanovsky, head of eScience Research Institute.

Computer simulation not only provides a pretty picture of the future city – it can switch between various scenarios of the city’s development according to the selected options. If external conditions prevent the completion of a certain stage of the city plan, the model can be quickly adjusted to account for its impact on the entire infrastructure. For instance, what if a new subway station appears nearby in five years? The model can calculate its effect on the city as well as suggest an optimal placement for the station according to passenger traffic. This feature allows for dynamic analysis of Yuzhniy’s development and timely elimination of obstacles.

The system will also simplify the systematic integration of “smart city” technologies that will be developed, tested and analyzed at Highpark Pushkinno. Yuzhniy will become a trail-blazing urbanized environment where intellectual systems for city management will be employed. In future, such technologies can find their place in other Russian cities. After the city modeling technologies have been tested and proven in Yuzhniy, this technology can be used to predict development of St. Petersburg’s districts or any other city in the country. Having seen the simulation in action, St. Petersburg Governor Georgy Poltavchenko has already asked to present it to the construction bureau of the city government to allow for development of similar projects for the Northern Capital’s development.

“Simulation is probably the key element of modern urban studies: it allows us to play out various scenarios for urban development “in silico” to provide us with selection rationale and estimate costs of effective city planning solutions, as well as evaluate the citizens’ quality of life. Although we have to accept that any model is still an abstraction and some of its elements often fall victim to real-life complications (from lack of budget to complex social and political factors). Still, the variety of simulation scenarios provides food for thought to those who make decisions on these matters, as it demonstrates the interdependence of various data on each other in different circumstances” – notes Alexander Boukhanovsky.

It should be noted that the eScience Research Institute is constantly developing computer simulations of crowd behavior, behavior of structures, pedestrian and transit traffic arrangements, emergency situations, medical assistance systems and many others.